Journey into the heart of Mongolia 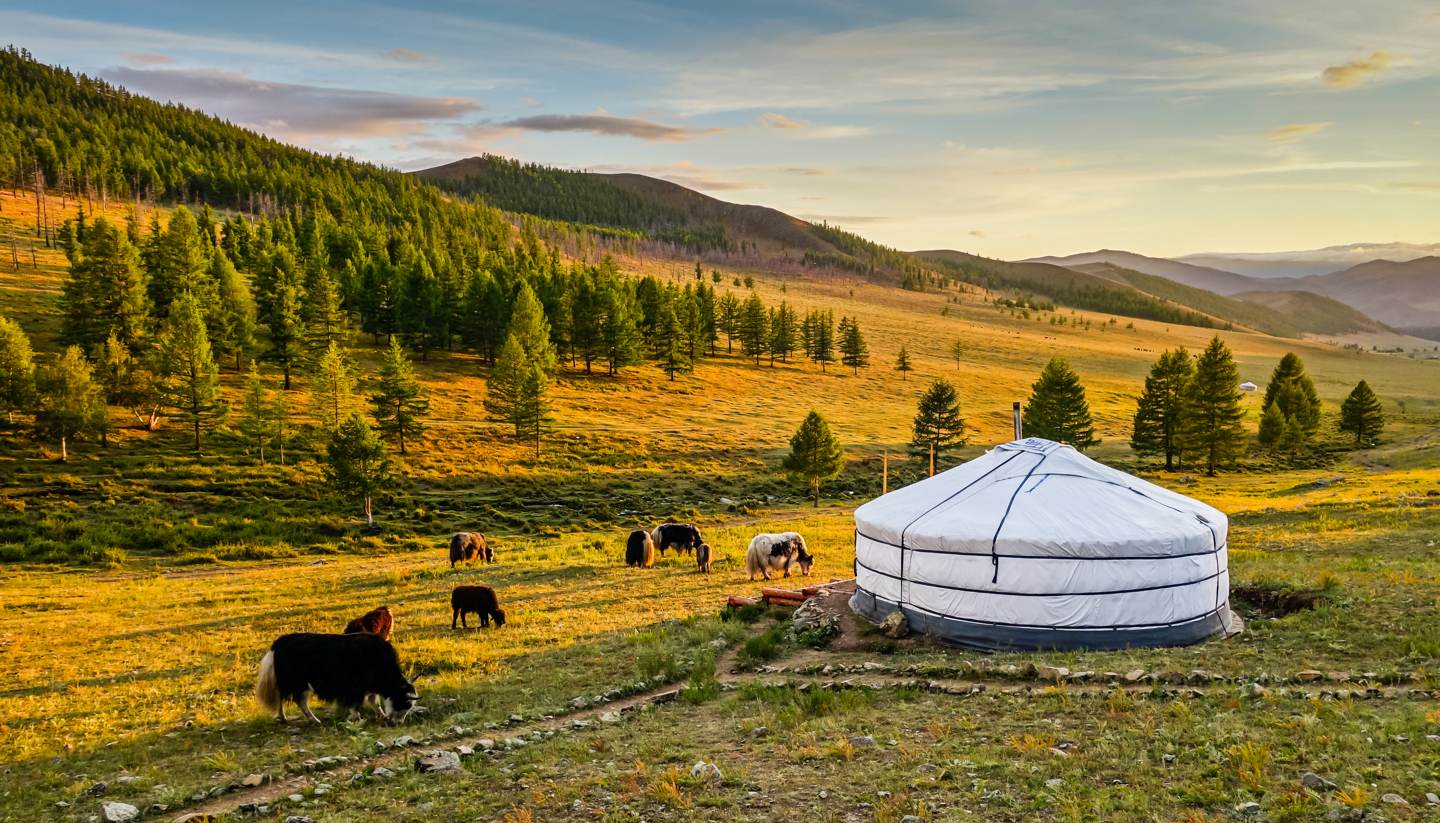 Remoteness is a big part of Mongolia’s appeal, but do you know where to begin?

Mongolia is huge, covering 1,1564,116 sq km (4,464,930 sq miles), roughly the areas of France, Spain and Portugal combined. This ancient land is home to a range of different terrains, from the seemingly endless sand dunes of the Gobi Desert, to the snow-capped Altai mountain range, and the absolutely lush Gorkhi-Terelj National Park.

As a travel destination, it is still somewhat relatively unexplored but that is changing, as Mongolia is set for a tourism boom in the coming years. For visitors, the main riddle is knowing where to begin, so use this article and our Mongolia travel guide to help plan for an unforgettable trip.

Ulaanbaatar, formerly anglicised as Ulan Bator, is the capital of Mongolia where close to 50% of Mongolia’s population lives. The city is something special – fusing together traditional Mongol culture with all of the urban trappings that come with being Mongolia’s primary hub. Here you will find gleaming skyscrapers, fancy hotels and international brands alongside venerable monasteries. The two most popular roads – Peace Avenue and Narnii Road – are where most visitors eat, shop and sleep.

Ulaanbaatar has many museums and cultural highlights including:

When it comes to shopping, you can’t miss the large State Department Store (locally known as Ikh Delgurr) along the Peace Avenue. Just around the corner from here you will find the Beatles Statue, a quirky site dedicated to the Fab Four.

The large and lively Naran Tuul Market, off Narnii Road, also offers a unique experience and you can buy anything from fine handcrafted rugs to second-hand utensils. 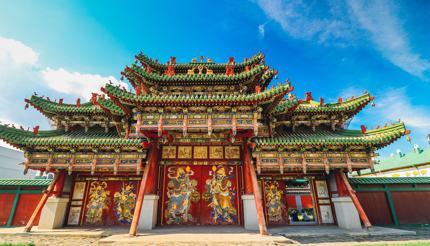 Lying just 65km (40 miles) northeast of Ulaanbaatar, Gorkhi-Terelj National Park is easily accessible from the capital. The deep gorge and rugged peaks attract hikers and horse riders in the summer, as well as cross-country skiers and dog-sledding adventurers in the winter. Most visitors also combine a trip to this park with a visit to the nearby Genghis Khan Statue Complex.

The giant Genghis Khan Equestrian Statue is an impossibly majestic landmark. It is built on the site that the great leader allegedly found a golden whip, according to legend. Today, visitors can go up to the visitor centre and walk to the head of the horse for stunning views. 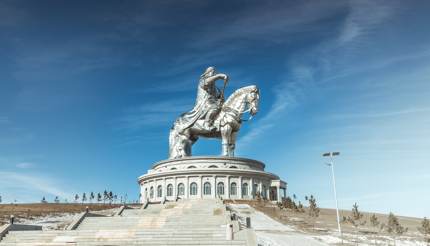 About 360km (224 miles) west of Ulaanbaatar is the delightful Orkhon Valley. It must be said that the journey into this central steppe of Mongolia is quite an experience – while the bumpy jeep ride is not always pleasant, the great expense of wilderness dotted with horses grazing peacefully can more than make up for the uncomfortable ride.

The UNESCO-listed Orkhon Valley Cultural Landscape is truly remarkable – this valley was first settled by humans some 62,000 to 58,000 years ago. Subsequently, as it provided both water and shelter, it was also the preferred settlement site of various tribes and cultures, from pre-historic to the Huns, Turkics, Uighurs, Kidans and Mongols. The showpiece in this region is the ruins of Karakorum, the ancient capital established by Genghis Khan in 1220. Nearby, the Erdene Zuu Monastery was the first Buddhist monastery in Mongolia. 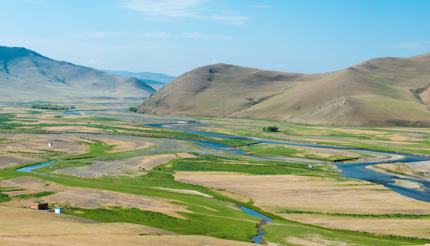 Stretches from China to Mongolia, the Gobi Desert is firmly on the bucket list of many a seasoned traveller. Dalanzadgad, about 540km (336 miles) south of Ulaanbaatar, is an ideal launch pad to the Gobi Guvansaikhan National Park and Bayanzag (Flaming Cliffs) which sits at the edge of the national park.

Covering 925 sq km (357 sq miles), the sands at Khongorinn Els (Singing Sands) appear to be singing loudly when the winds blow. Not far away, the peculiar landscape of Bayanzag (Flaming Cliffs) can set your imagination wild. Massive red-tinted rocks rising from the ground and when the sun is low in the sky, the shades of orange and red seem to intensify, adding a strange sense of mystery. Bayanzag is also a scientifically important site – it was here that explorer and zoologist Roy Chapman Andrews and his team found the fossilised remains of Cretaceous animals such as Protoceratops and Velociraptor in 1922.

The best time to visit Mongolia is undoubtedly between July 10 to 13, during the annual Naadam Festival. The festival is vital for many nomadic communities to come together, reconnect and also compete in three traditional activities dubbed the “three games of men”: horse racing, wrestling and archery.

Naadam is not just about sportsmanship either, cultural highlights are equally important. This is the best time to catch a few performances of Khöömei overtone singing (aka Tuvan throat singing) and Biyelgee dance.

In 2010, the festival was entered onto the Representative List of the Intangible Cultural Heritage of Humanity of UNESCO. Today, the biggest Naadam Festival is in Ulaanbaatar, but there are smaller-scale Naadam Festivals held throughout the country. 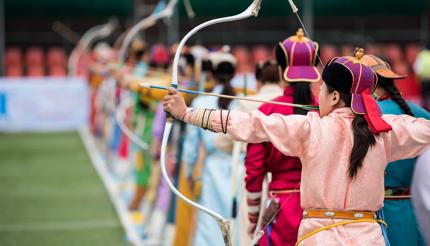 Women taking part in archery during the Naadam Festival

Getting to Mongolia by air

Flight time from Beijing to Ulaanbaatar is about 2 hrs and 15 mins, while from Moscow, the flight time is about 6 hours. Use the flight page on World Travel Guide to find the best and cheapest air travel deals.

As tourism is high on the agenda, the Mongolia government plans to launch the New Ulaanbaatar International Airport in late 2019 or early 2020. The new airport is set to serve up to 3 million passengers a year and with the potential for expansion. So there has never been a better time to start planning a journey into the heart of Mongolia.

Getting to Mongolia by train

Ulaanbaatar is linked to Moscow and Beijing via the Trans-Mongolian Railway.

From Beijing, there are two departures a week during the warmer months (June to early October) and one departure a week in other months. The train distance between Beijing and Ulaanbaatar is 1,553km (965 miles) and the journey takes about 31 hours. The tickets are divided into three categories: hard sleeper, soft sleeper and deluxe soft sleeper. You can only book your tickets 30 days in advance (unless you travel in a group and in this case, you can book 60 days in advance). One interesting fact about this journey is that Mongolia runs on the Russian gauge track, which is wider than the Chinese gauge track (Chinese uses the standard gauge like in Europe). This means at the border town of Erlian, staff must change the bogies of the train and the process usually takes three hours.

From Moscow, there are also two departures a week during the warmer months (June to early October) and one departure a week in other months. The train distance between Moscow and Ulaanbaatar is 4,635km (2,880 miles) and the journey takes almost 98 hours. Beware that the train tickets between Moscow and Ulaanbaatar are not cheap, hence most travellers choose to fly instead. 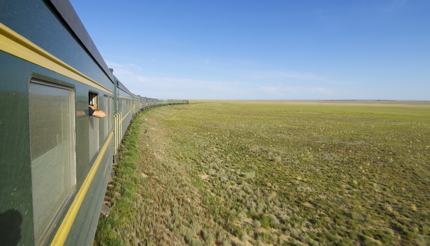 Views of Mongolian Steppe from the Trans-Mongolian Railway

Getting to Mongolia by bus

It is possible to take a bus from Beijing to the border town Erlian, and then take a taxi across the China-Mongolia border to Zamyn-Üüd on the Mongolian side (you cannot walk across, unfortunately). From Zamyn-Üüd, you can catch a train onwards to Ulaanbaatar, which is 662km (411 miles) away.

From Russia, there is a bus service from Ulan-Ude (East Siberia, Russia) to Ulaanbaatar. The journey is about 12 hours.

Before you go, see our Mongolia travel guide and in particular: