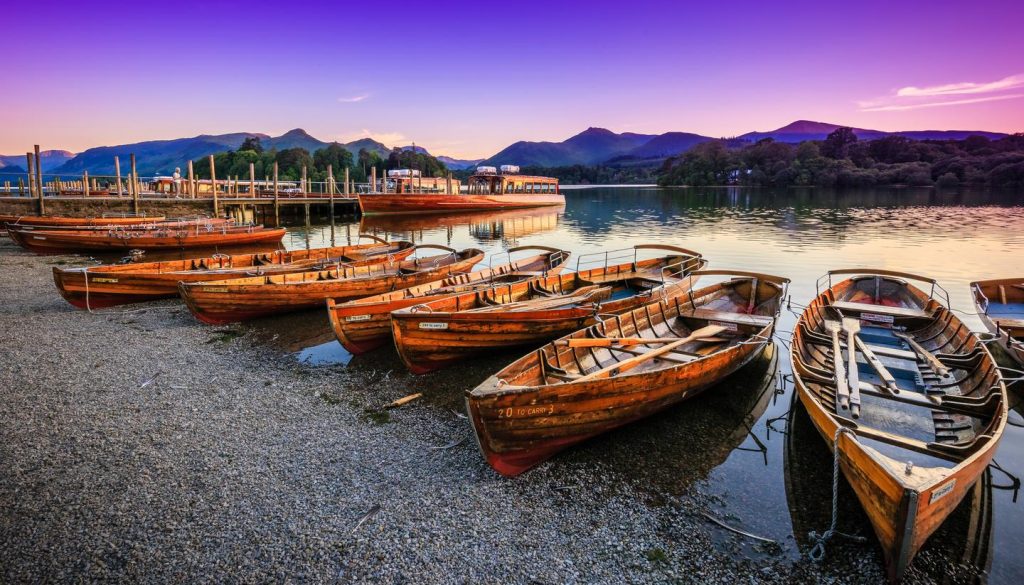 The Lake District’s sweeping valleys, stone villages and pristine lakes lure millions of visitors each year, will you be one of them soon?

Designated as a World Heritage Site by UNESCO in 2017, the Lake District attracts 15.8 million visitors every year and is famous for lending romance, suspense and mystery to numerous fiction (and non-fiction) stories. But you needn’t be a forlorn lover, troubled writer or creatively-sapped artist to get inspiration from the Lake District – just touring and experiencing the area can be enough to re-energise the wariest of souls.

In this article, we shall look at some of the best ways to tour the Lake District.

England’s longest and largest natural lake, Windermere is probably the most popular destination for visitors especially in high summer but that doesn’t mean you should skip it. Our recommendation is to leave the busy east shore and take a 10-minute ferry from Bowness Nab to Ferry House at Far Sawrey on the opposite side. Upon disembarking, walk up to Claife Viewing Station, a Georgian purpose-built station that was once used by wealthy visitors to host fancy parties and dances – today, it is one of the best places to get Insta-worthy shots in Windermere. After that, enjoy a four-mile lakeshore walk that leads towards Wray Castle. 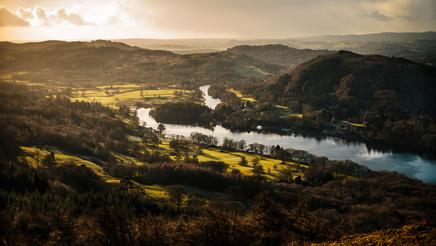 2.6km (1.6 miles) west from Claife Viewing Station is Hill Top, the former home of Beatrix Potter which she bought in 1905 with proceeds from her first book, the Tale of Peter Rabbit. When she died in 1943, she left Hill Top to the National Trust on the conditions that it is to be kept as she left it.

The literary heavyweight William Wordsworth called Grasmere “The loveliest spot that man hath ever found”. His home, Dove Cottage, is preserved as though still inhabited by its famous dweller. The delightful garden, where some of the greatest lines of English literature were composed, is still a source of inspiration for many visitors. 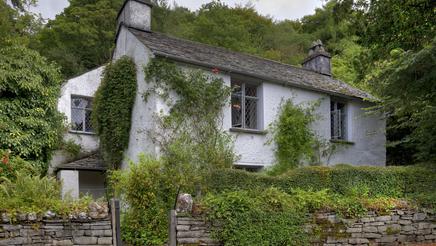 Up in Keswick, Derwentwater spreads out on the banks of Borrowdale valley to a vast scene of small jetties and romantic rowing boats. It is surrounded by looming mountains that seem to be protecting it from becoming the new Windermere. Boat trips through the calm waters are operated by Keswick Launch and we recommend hiring a rowing boat or a motorboat to sail around the islands and discover little inlets around Derwentwater. Back on dry land, take a circular walk from Keswick to Castlerigg Stone Circle. Thought to have been constructed about 3000 BCE, it is one of the earliest stone circles to be found in Britain and the surrounding views are simply sensational.

Another popular walk in Keswick is Cat Bells which leads visitors high above the shores of Derwentwater. It’s not too hard of a hill to climb for the able-bodied, meaning that it’s great for families of all ages to experience the incredible, panoramic views of the Skiddaw mountain, Blencathra hills and, of course, Derwentwater. Despite the unusual name, you don’t need to worry about a clowder of jingling cats following you around. The etymology of the fell’s name is thought to be an alteration of ‘cat bields’ which means, roughly, home or shelter of wild cats. Intriguingly, James Clarke commented in his 1787 ‘Survey of the Lakes’ that “Catt-gill and Catt-cragg are so named for the catts that inhabit them”. As both these locations (Cat Gill and Cat Crag) are close to Keswick, the ‘cat bields’ theory seems to hold water. Another theory is that the hill is perceived to have two bell-shaped peaks and was once home to wild cats.

On the lower slopes of Cat Bells, look out for an assuming plaque dedicated to Thomas Arthur Leonard. A Victorian social reformer who was married to a suffragette, Leonard worked tirelessly to open up the countryside to the British working class – during a time when it was seen as the domain of the rich and privileged. 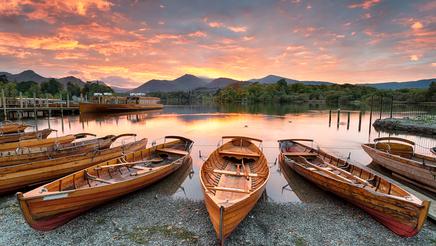 Buttermere is a truly stunning lake that can be found at the bottom of the Honister Pass. A particular favourite of photographers, the trees to the south end of the lake, referred to as ‘The Sentinels’, are said to be the most photographed trees in the whole of the UK.

Buttermere is a great picnic location, and there are also several walks in the area. A journey around the lake would take, on average, an hour and a half to two hours thanks to the terrain being rather flat. There is a car park on either side of the lake, making it very easy to navigate and follow. For a more challenging walk, climb up Honister Pass and you’ll be treated to some glorious views of Buttermere and the surrounding area. 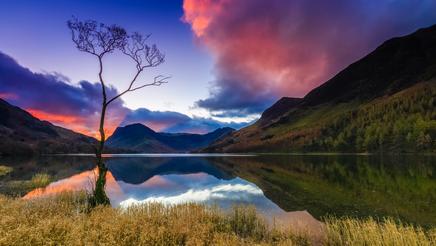 Sunrise at Buttermere in the Lake District, Cumbria, England

Sandwiched between the lakes of Thirlmere and Ullswater, Helvellyn is England’s third highest mountain and attracts many hikers thanks to the spell-binding views that it can produce.

Before your trip, it is worth taking a few minutes to learn about Charles Gough. An artist of the early English romantic movement, Gough set off on the walk from Helvellyn to Grasmere via Striding Edge on 17 April 1805, alongside his terrier Foxie, and he wasn’t to be seen again. That was until three months later when barking alerted a shepherd to investigate. Upon arriving, he found the remains of Charles Gough (who seemed to have fallen from the ridge), the very-much alive Foxie and a dead puppy that Foxie had evidently birthed but did not survive. The story served as a creative force for poetry and artwork – inspired by the somewhat romantic notion of a servile dog staying with her master until the end and beyond. 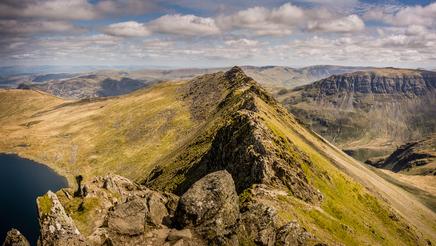 View from the top of Helvellyn, Cumbria, England

Known for being the home of a World War I memorial, after it was gifted by Lord Leconfield to the National Trust as a thank you for the sacrifice of British soldiers, Scafell Pike is England’s highest mountain. Standing at 978m (3,209ft), it’s a challenge even for the most experienced of ramblers. As such, it’s important to pack all of the essentials (a compass, map and water) and check the weather before going ahead. With all of that said, you can look forward to the reward of a stunning vista of mountains, hills, waterways and lakes – offering stunning sights of Lake District attractions such as Wast Water, Windermere and Coniston Old Man. On a good day, even the Isle of Man is visible – which is located nearly 80km or 50 miles away and across the Irish Sea.

Before you start your hike at Wasdale Head, travel south 12km (7.5 miles) south to Santon Bridge, home of the Biggest Liar competition. The contest is held in memory of Will Ritson, a former pub owner who told incredible, completely untrue stories, including turnips which grew so large that people carved them out to make sheds for cows. The competition is held every November and each participant has five minutes to tell the most convincing lie they can. 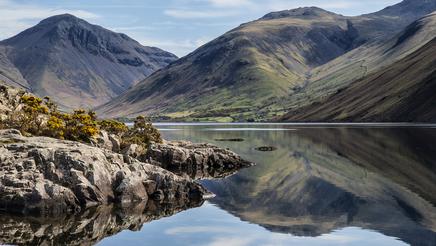 Before you go, see the England travel guide.