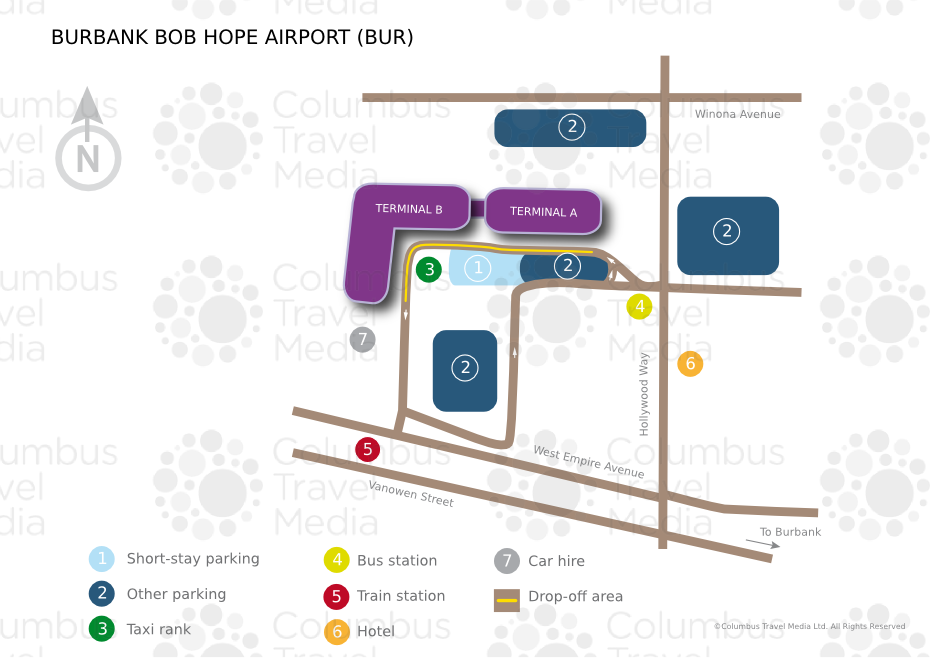 An information desk (tel: +1 818 840 8840) is centrally located in Terminal A. Courtesy telephones are available throughout the terminals.

Terminals A and B are housed in the same building and are within easy walking distance of each other.

Taxi:Taxis and shuttles are available from the airport, departing from the islands in front of the terminal building. The fare into Burbank is around US$10, and US$40 to central Los Angeles. Expect a journey time of 30-40 minutes to Burbank, but this may be longer depending on traffic conditions.

Rail: Local Metrolink (tel: +1 800 371 5465; www.metrolinktrains.com) and Amtrak (tel: +1 800 872 7245; www.amtrak.com) commuter trains serve the airport station on Empire Avenue near the south entrance to the airport. The station is within walking distance, and an airport shuttle operates to/from the terminals.

A bank is situated at the main entrance on Hollywood Boulevard, near economy car park C. There are ATMs located around the terminals.

There are several places to eat in both terminals. These include a burger outlet and café in Terminal A, a restaurant in Terminal B and bars in each terminal.

There are various newsagents within the terminal, some of which sell gifts and souvenirs. Duty-free shopping is not available, as the airport only serves domestic routes.

Skycap porters are available at the airport to help with luggage. A dedicated lost and found service (tel: +1 818 729 2231) is operated by the airport police.

There are shoeshine services within the terminals.

Services for the disabled include TDD phones located at gates A1, A6, B3 and in the Terminal B lobby. Lifts are available to board aircrafts, and wheelchair accessible shuttles link the long-term car parks within the terminal.