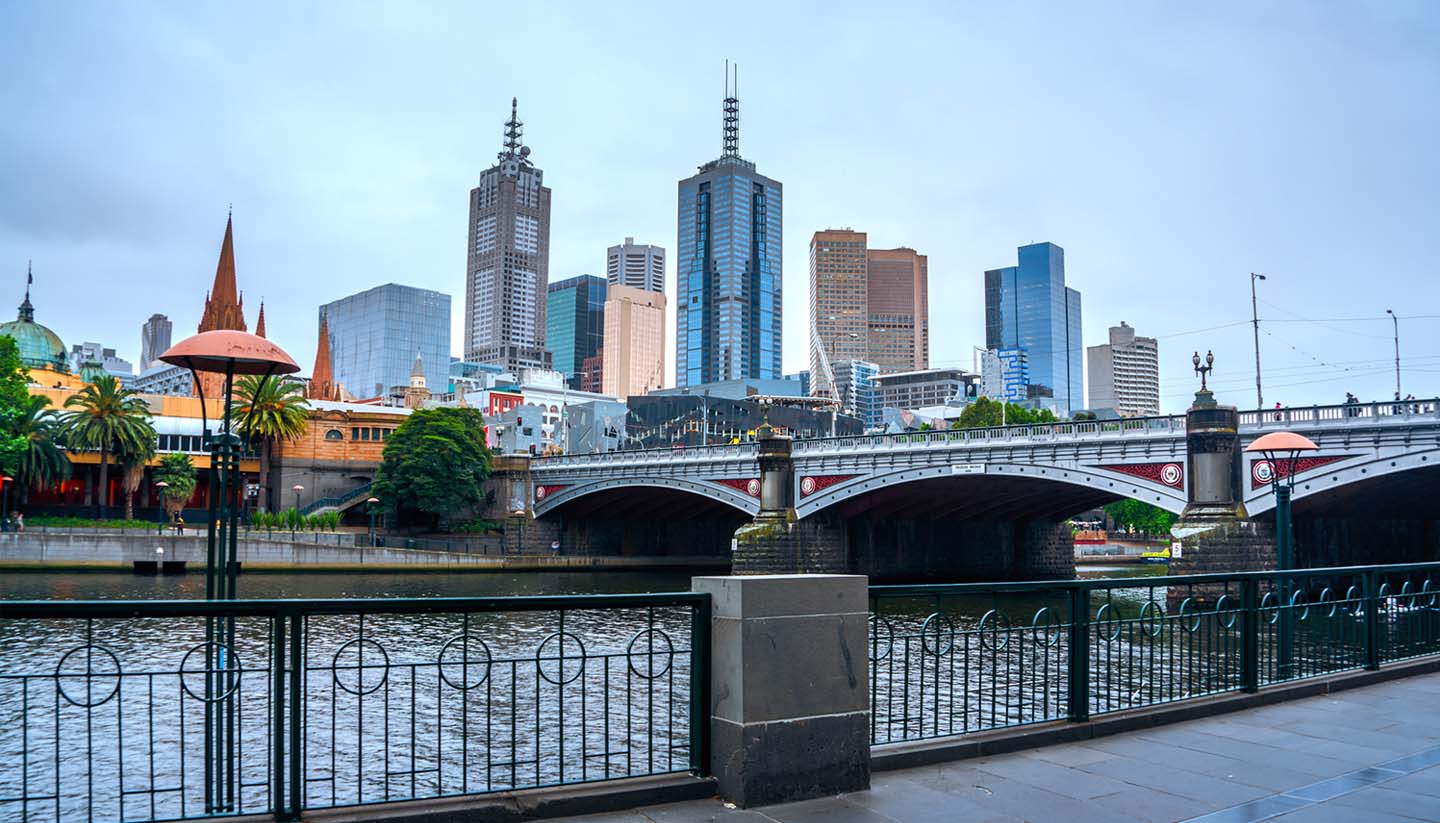 the IDs1369Melbourne Airport
Places in Melbourne

Arty, cosmopolitan and as comfortable sipping a latte as it is chugging a cold beer, Melbourne has strong claim to the status of Australia’s cultural capital.

That it’s a bona fide world city is beyond doubt: its food scene is sensational, its sporting calendar rivals that of anywhere on the planet and its neighbourhoods range from the hip to the historical. Seaside trams trundle past red-brick buildings, modern architecture gleams over civic squares and alternative rock blares out of laneway bars - it’s a city with style.

A diverse population has undoubtedly contributed to this vibrant international culture. Waves of immigration from European and Asian countries over the past 50 years have resulted in an eclectic and energetic blend of food, theatre, music, art and literature, as well as food, with Chinatown and the Italian inspired Lygon Street being great examples of the city’s diverse appeal.

Regardless of where you are in town, however, you won’t have to search far for adherents of the city’s all-consuming sporting passion: Australian Rules Football, universally known as footy.

The praise that now routinely gets heaped on Melbourne might rile Sydneysiders, but few would dispute the fact that the Victorian capital is a place apart. This is no new thing; the Immigration Museum, the Melbourne Museum and the State Library are great places to get a historical perspective of a city whose Aboriginal beginnings, Gold Rush-enhanced development and rapid expansion saw it become Australia’s political capital by 1901.

Fast forward more than a century and the city has evolved into a global destination ripe for visitor exploration. Head out to trendy St Kilda for seafood restaurants and a walk along the pier. Wander bohemian Fitzroy for art galleries and specialist bookstores. Splash some cash at the designer shops of Toorak and South Yarra. Or stick to the centre, where attractions include Federation Square, Flinders Street Station and Old Melbourne Gaol.

Melbourne often ranks high on the ‘most liveable cities in the world’ list, and for those visiting, it’s not hard to understand why.

This central and luxurious hotel has spacious rooms with inviting king-size beds and cool Italian marble bathrooms. Each room sports a sterling city or river view. The top floors are set aside for Executive Suites, which have superior views and allow guests to access the relaxing Grand Club Lounge. Amenities include a swimming pool, fitness club, cafe, food court, bar and round-the-clock business centre.

True to its name, this whisper-quiet hotel is housed in a magnificent former railway building. The first bricks of the building were laid in 1887 and it served as the railway department headquarters for donkey's years. Located near Spencer Street station, these days it has plush red Pullman carpets in the suites and corridors long enough to drive a train down. This heritage-listed building is one of the most impressive hotels in Melbourne.

Located in West Melbourne, with the North Melbourne shopping village close by, Miami Hotel has great facilities for the budget conscious traveller, including wireless broadband, internet kiosks, and free off-street parking. The hotel specialises in group bookings and is described as clean, basic, warm and comfortable through several user reviews.

Elegant refined warm and welcoming describes the ambience and room decor in this five star SouthBank Promenade located hotel. The Langham is ideally located on the banks of the Yarra (with stunning views across the river) and features all the best Melbourne has to offer right on its doorstep. With a Chuan Spa exercise facilities and a noteworthy restaurant – The Melba – there is much to savour at The Langham.

A reliable budget option located in the heart of Melbourne's Chinatown, Hotel Ibis boasts 121 rooms with comfortable, contemporary and primarily functional interiors. A buffet-style breakfast is served every morning, alongside a 24-hour "Grab it and Go" menu. The hotel also features a fitness centre and an LCD TV in every room.

On the doorstep of trendy Chapel Street, the Claremont Guest House is one of the best cheap hotels in Melbourne. With 24-hour reception, bright and airy rooms, guest laundry facilities, and TVs and phones in each room, you're sure to enjoy your stay. Just 10 minutes from the CBD, and with public transport near the front door, you're never far from the action. It's perfect for the budget traveller with dormitory rooms and shared bathrooms.