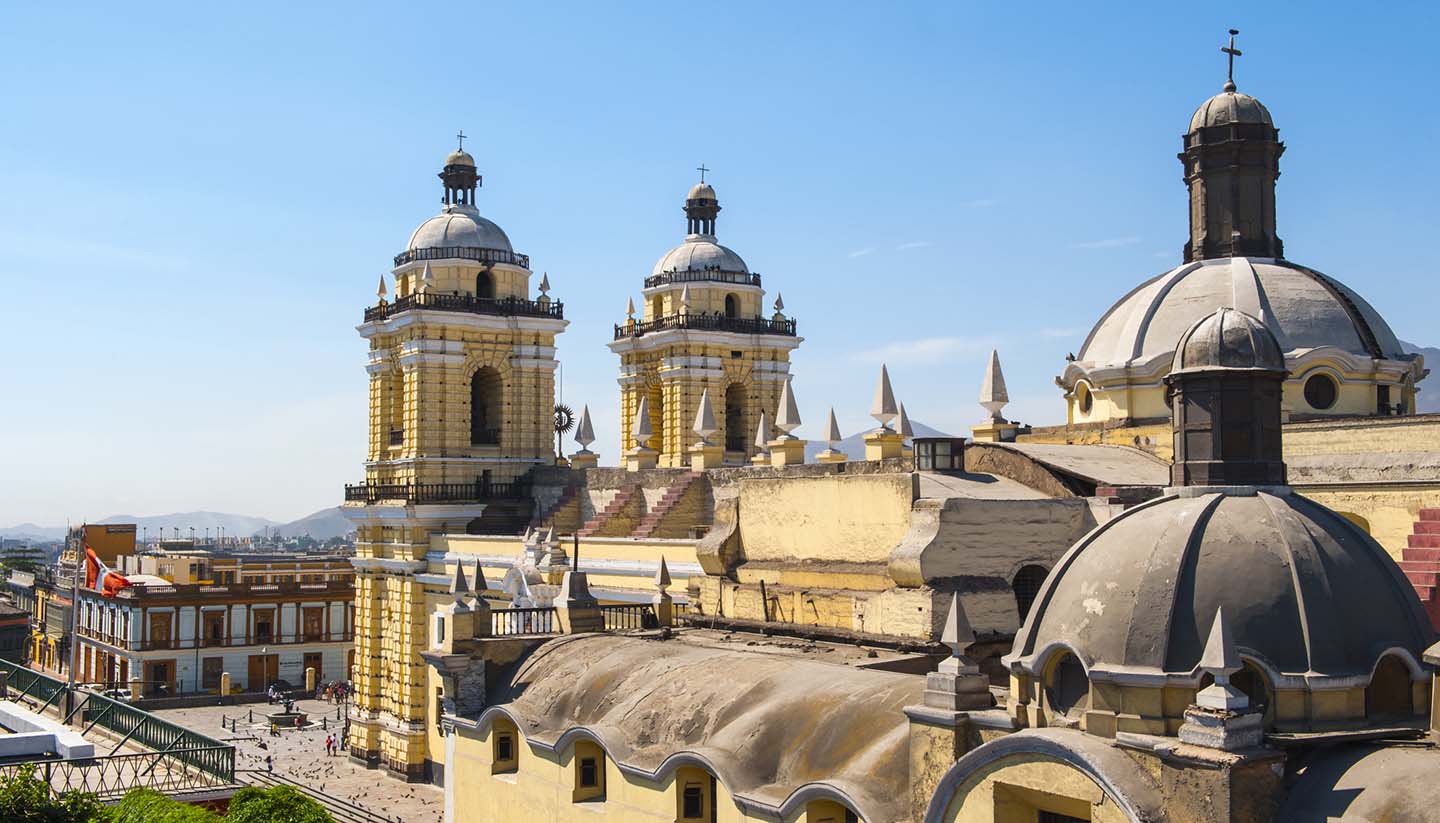 It might not live up to the splendour of the past, but Lima is much more than a stopping point on the way to the Inca Trail and the Amazon. Formerly one of the most important cities in the Spanish empire, today it’s a jumble of modern architecture and urban sprawl beneath near-perpetual grey skies. But with nearly 10 million inhabitants (around a third of the whole country), this 500-year-old city is the undisputed heart of Peru.

Halfway along Peru's dusty coastline, the cliff-top capital is poised between the Pacific Ocean and the foothills of the Andes. It also lies near a tectonic plate, and has been subject to a succession of earthquakes that have wiped out a considerable amount of ancient architecture.

But not all of it, as Lima’s UNESCO World Heritage historic centre attests with the looming baroque majesty of Monastery of San Francisco, amongst other treasures.

Next to the seafront are a couple of affluent, trendy districts that equal almost any in Latin America for character and nightlife. The bohemian yet extremely elegant Barranco harbours a creative population of artists, photographers and musicians amidst handsome mansions, cool bars, pretty cafés and some phenomenal restaurants.

Indeed, the Peruvian food revolution that began here a couple of decades ago, and proceeded to spread across the Atlantic, can be traced back to gourmet spots in Lima. Lovers of ceviche in London and New York will find Peruvian cuisine all the more sublime back at the source.

Near to Barranco, the fashionable neighbourhood of Miraflores offers luxury hotels, world-class shopping and more than a few decadent clubs. Surfers will find easy access to Lima’s beaches, while paragliding from the cliffs is very popular. Miraflores is also home to Huaca Pucllana, a 3rd-century clay pyramid that pre-dates the Incas.

Although tourists tend to stick to the coast, it’s essential to take a bus downtown for the real centre of Lima life. The area is poorer than Barranco and Miraflores, but you’ll find traditional bars, impressive colonial buildings and the grand central square with its enormous 16th-century cathedral.

The Lima offering from this reliable international hotel chain is a comfortable concoction of well-dressed rooms with sea views. Eat in at the second floor restaurant La Vista, offering Peruvian and international flavours, or try the Sushi and Cerviche Lounge for fusion fish dishes. The hotel also has fitness facilities, a spa and pool.

This highly regarded hotel benefits from a stylish location overlooking the seafront and public gardens in Miraflores. Views don't come much better than from the rooftop pool and breakfast is also served sky high in the poolside Observatory Restaurant. An additional restaurant, swanky bar, an on-site gym and spa add further appeal to the luxurious experience.

One of the newest additions to the luxury hotel scene, art-boutique Hotel B in Barranco has quickly earned a sparking reputation for its elegant suites and seamless service. Set in a stunning white mansion enlivened by well-curated artwork, rooms are individually decorated and come with plush linens. The intimate dining room is served by celebrated Peruvian chef Oscar Velarde.

Set in a pink century-old mansion, Antigua is characterful and reasonably priced, especially considering its upmarket location in Miraflores. Handcrafted furnishings, antiques and free Wi-Fi complement the inviting rooms, some with kitchenettes and baths. Opt for a front-facing room which have a sense of history and a bit more comfort than the more modern ones at the back.

For creative types, Second Home Peru won't fail to impress. The timber-framed, century-old house and expansive gardens have fairy tale allure, decked out in life-size sculptures and colourful canvases by leading Peruvian artist and proprietor Victor Delfin. Each bedroom is unique and rich in quirkiness – opt for one of the three beautiful ocean-side stays to fall asleep to the crashing of waves.

Part of the Preferred Hotels collection, Casa Andina is everything you'd hope for in a night's stay. Set in a high-rise the heart of Miraflores, it offers its own restaurant, bar, gym and sauna. Contemporary rooms are outfitted with cutting-edge mod-cons and boast impressive views across the cityscape. Breakfast is plentiful and the obliging staff go out of their way to ensure visitors enjoy their stay.