10 things to see and do in Baku 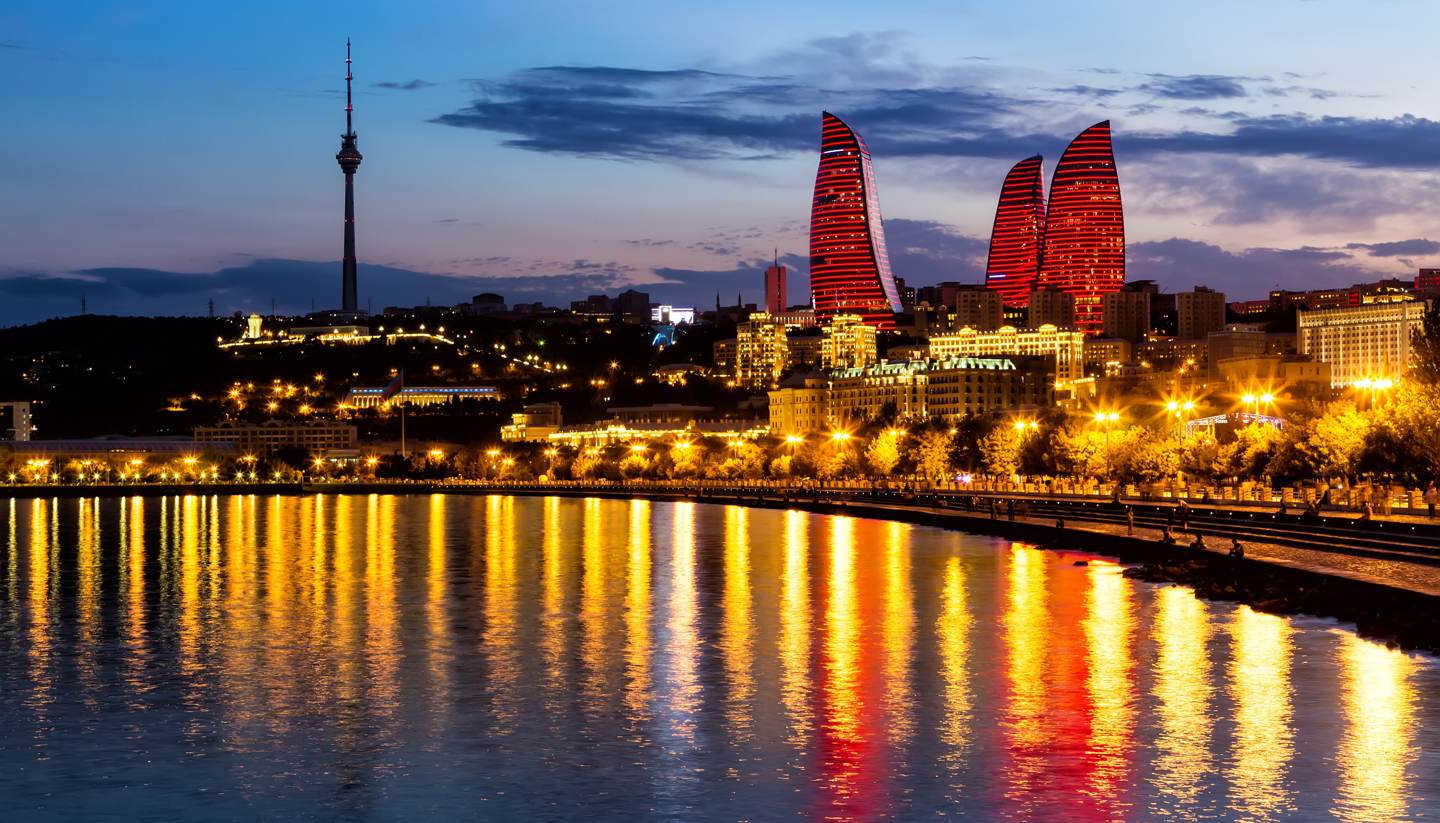 From charming historical sights to bubbling mud volcanoes, we seek out some of the more surprising highlights of Azerbaijan's little-visited capital

If you need to look up where Baku is, you are not alone. Baku is the capital of Azerbaijan, a nation sandwiched between Iran to the south and Russia to the north, and bordering Armenia and Georgia to the west. Azerbaijan was the original ‘East-meets-West’ destination and a prominent stop on the Silk Road.

Baku sits by the Caspian Sea. The UNESCO-listed Old City (Icheri Sheher) of Baku is an alluring walled complex of Islamic fortresses. Outside of the Old City, futuristic and gleaming skyscrapers dominate the skyline with notable architecture includes the Flame Towers (by Hellmuth, Obata and Kassabaum) and Heydar Aliyev Center (by Zaha Hadid). This bustling oil-rich city has enough charms to blow even the biggest sceptic away and here are the 10 best things to do in Baku:

Within the walled Old City, the tall and massive Maiden Tower is the monumental symbol of Baku. Dating back at least to the 12th century, the tower’s original function is surrounded by many legends – today people still debate if it was a defensive fort, a Zoroastrian temple or an astronomical observatory – but the superb views from the top are beyond doubt. So climb up the tower for aerial views of the Old City’s labyrinth of alleyways and its raising minarets. 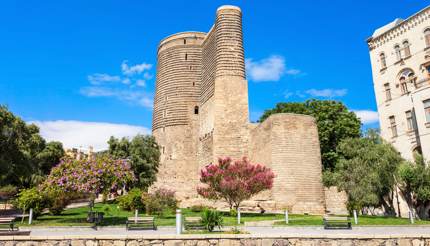 After that, make time for the amazing Palace of the Shirvanshahs. This 15th-century grandiose memorial includes paradise gardens, an ornamental stone pavilion and a mausoleum of philosopher Seyid Yahya Bakuvi.

Other highlights inside the Old City include delightful antique stores that occupy wall space between tiny mosques, traditional tearooms and art galleries. 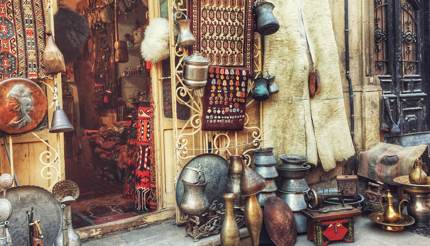 Just around the corner from Palace of the Shirvanshahs is the Museum of Miniature Books. Said to be the only museum of its kind in the world, its collection includes a copy of ancient Quran and three smallest books in the world each measuring just 2cm x 2cm – you’d need a magnifying glass to read them.

3. Stroll along one of Europe’s longest promenades

Refreshingly green and spacious, and benefiting from a sea breeze, Baku Boulevard is one of the most pleasing areas of the city. It roughly runs 3km (1.9 miles) along the fringe of the Caspian Sea, connecting two of the city’s historic squares, National Flag and Azadliq (Freedom).

You really can’t miss the massive flagpole standing proudly on the National Flag Square, which is the world’s third tallest flagpole, after the Dushanbe flagpole in Tajikistan and the Jeddah flagpole in Saudi Arabia.

Azadliq (Freedom) square, once known as the Lenin Square, was renamed following the collapse of the Soviet Union in 1991. The imposing Government House of Baku flanks one side of the square. 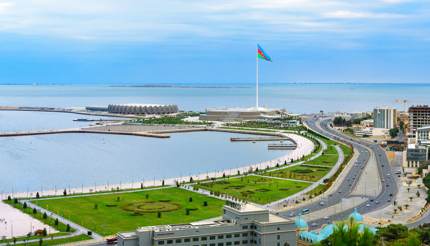 Get your camera ready as you are likely to snap a few selfies with this incredible structure modelled on the shape of a rolled carpet on the seafront.

Azerbaijan takes great pride in their colourful carpets. Its former President Ilham Aliyev once described carpets as their national art and you will know exactly what he meant when you visit the rich collection of carpets and artefacts on display here. The venue often hosts international symposiums and conferences too.

If you want to take a beautiful Azerbaijan carpet home, we recommend you to get one from the shop at the Carpet Museum and keep the certificate with you. All carpets must have a certificate stating the price and the age of the carpet. Please note that anything more than 30 years old is subject to export tax and must be certified by the Ministry of Culture. 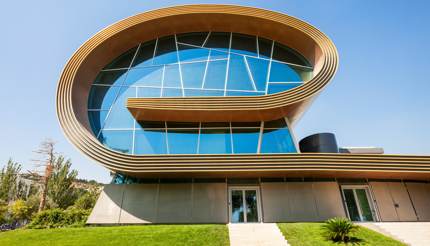 Baku’s dining scene has really taken off in recent years as restaurateurs scramble over themselves to sate the appetites of the city’s nouveau riche.

Fireworks Urban Kitchen (JW Marriott Hotel), Sky Grill (Hilton Hotel), Art Club Restaurant (9 Asef Zeynalli) are some of the hottest kitchens in town, offering everything from fresh seafood to juicy steaks. If you want authentic Azeri food that is easy on your wallet, Firuza (Eliyarbeyov kuc 14) is your best bet. ‬ 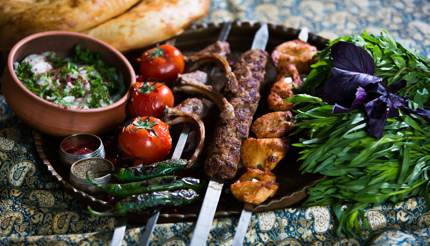 6. Relish in some fantastic modernist architecture

The striking, glass-fronted Heydar Aliyev Center is simply magnificent. Designed by Zaha Hadid, the curved architectural marvel was modelled on the signature of its namesake, Heydar Aliyev, the first president of an independent Azerbaijan. Inside, the structure houses an auditorium, exhibition halls and the Heydar Aliyev Museum that hosts both temporary and permanent exhibitions.

Flame Towers at the hilltop are another worthy diversion and you can ride the funicular from the seaside to them. The facades of the towers are covered with LED screens which usually display burning flames and a waving flag of Azerbaijan at night. 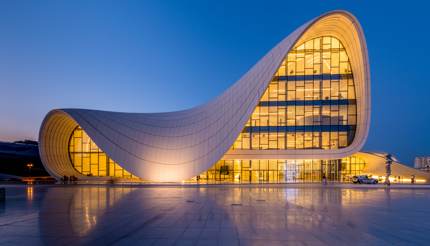 Heydar Aliyev Center in Baku; it is said that Zaha Hadid didn’t use a single straight line in this magnificent building

7. Rest and relax in a Hamam

Hamam Mehellesi is the oldest public bath in Baku and has separate days for men and women. It is located near the Ichari Sheher metro station. The eccentric Teze Bey Hamam (30 Shamilya) is another popular public bath but is for men only. For ladies who are after ultimate relaxation, head to the lush Jaleh Spa at the Four Seasons Hotel.

8. Listen to the sweet tunes

Every October Baku hosts the acclaimed International Jazz Festival. If you are visiting Baku outside the festival week, you can still check out the Jazz Club at 96 Nizami which is just a 5 minutes’ walk away from the Government House.

An hour’s drive from the neon lights of Baku lies Gobustan National Park, a distinctive semi-desert landscape that was granted UNESCO World Heritage status in 2007.

While many visitors venture here to snap a shot of the spurting mud volcanoes that bubble around the park, Gobustan’s real worth is in its remarkable collection of cave art. The site is home to around 6,000 prehistoric petroglyphs with detailed drawings depicting primitive human existence.

Also check out Gaval Dash, a big flat stone that makes a tambourine-like sound when it is hit with an object. 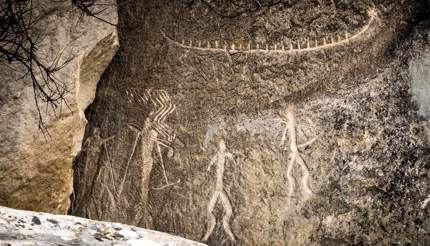 10. Take a trip to Fire Mountain

While it’s certainly more hill than mountain, Yanar Dag (known under the sexed-up pseudonym of ‘Fire Mountain’) is both a dazzling and fascinating sight.

According to local legend, the 10m-long (33ft) wall of burning flames started after a clumsy shepherd accidentally lit the gas stream below when pausing for a cigarette, though legendary explorer Marco Polo observed flames here as far back as the 13th century. The spectacle is best observed at night. 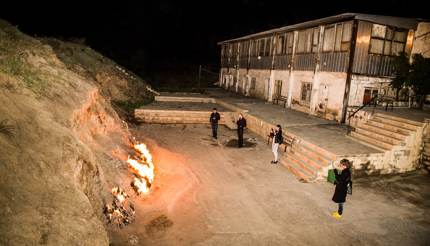 Before you go, check out the Azerbaijan travel guide.