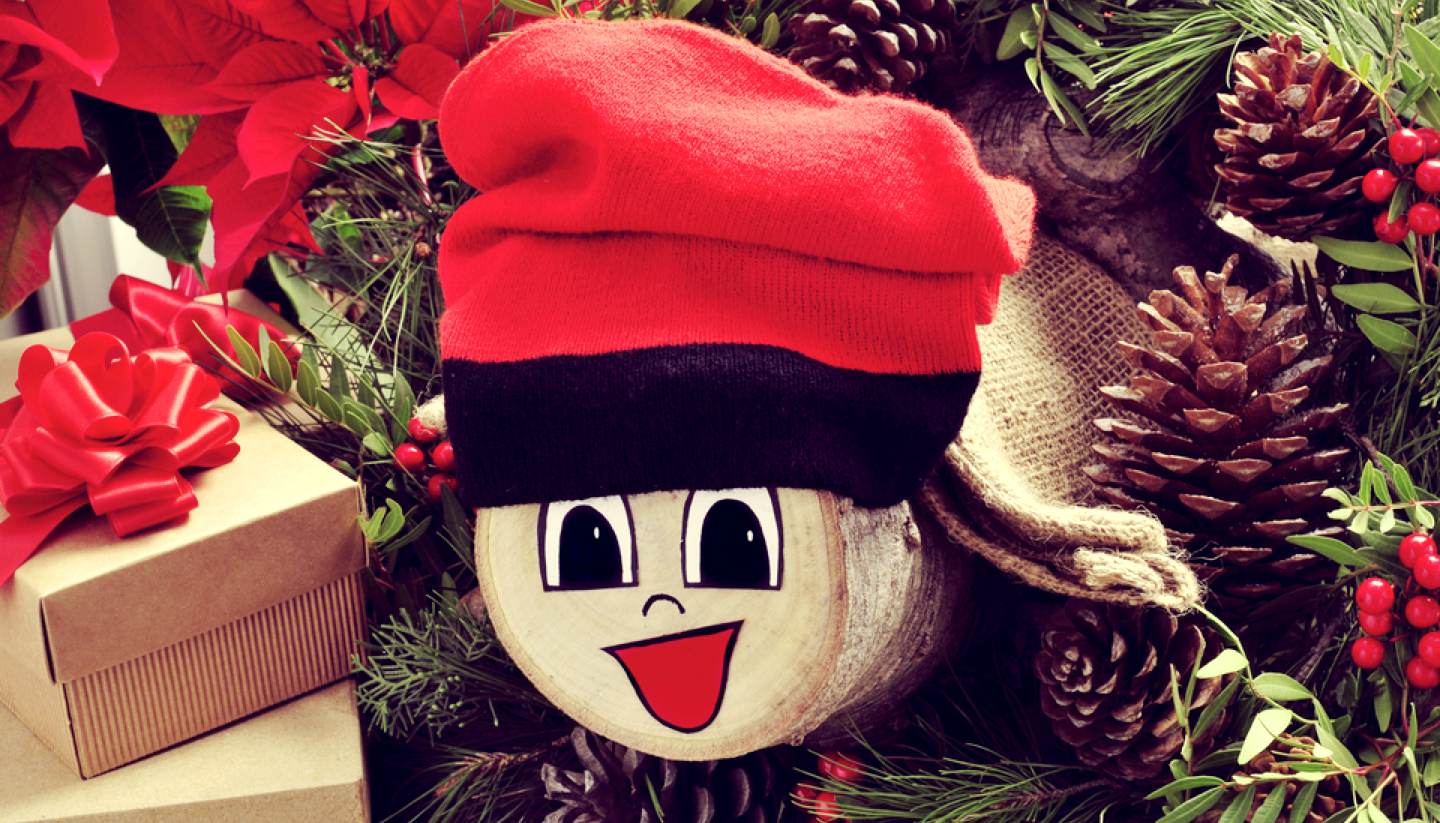 From throwing of one's shoe to surfing Santa, these eccentric Christmas traditions range from the hilarious to the downright macabre

Most Christians around the world celebrate Christmas with the usual holiday traditions – decorating Christmas trees, hanging Advent wreaths, attending church services and incorporating a significant amount of delicious food into the rituals. But others have developed their unique takes on the holiday. Here’s our roundup of the most bizarre festival traditions from around the world.

We’re all familiar with the major players in the Christmas story – baby Jesus in a manger, surrounded by Mary, Joseph, angels and animals. However, in Catalonia, an autonomous community in north-eastern Spain, you’re likely to spot a figure with his trousers down and discharging solid waste in the middle of the holy scene. The character is known as the caganer (which translates as the ‘defecator’). Wearing black trousers, a white shirt and a red barretina (a traditional hat), the caganer has been a popular staple of Catalonian nativities since the 18th century, although nobody can agree on whether he’s deeply symbolic or simply a local joke. 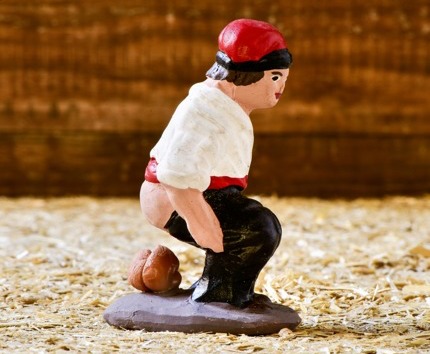 Tió de Nadal is another Catalonian character that ‘defecates’ to delight during the festive period. Essentially, Tió de Nadal is a small piece of log with a painted smiley face, and two tiny sticks propping its head up and a blanket covering its body. Adults would hide candies under the blanket, before letting young children whack Tió de Nadal with a stick, causing it to have a bowel movement which produces candies for the children to enjoy. 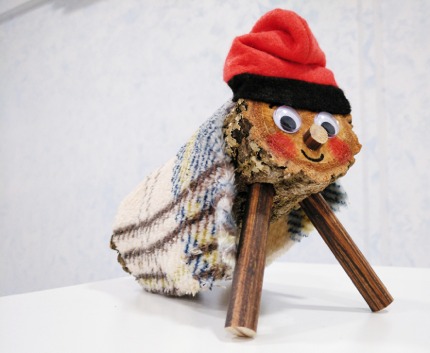 It’s the refrain of parents around the world in the run-up to Christmas: “Santa won’t bring you any toys if you’re naughty!” But parents in Austria and parts of Germany know how to go one step further – kids who don’t behave are threatened with the wrath of Krampus, a half-goat, half-demon monster. Traditionally, Krampus would appear on the night of December 5th with a bunch of sticks and a large sack – he would beat disobedient children with the sticks and toss the very bad ones into the sack, which he would then drag it to the underworld…

If the scary Krampus doesn’t make your hair stand on end, then the Yule Cat in Iceland below probably will. 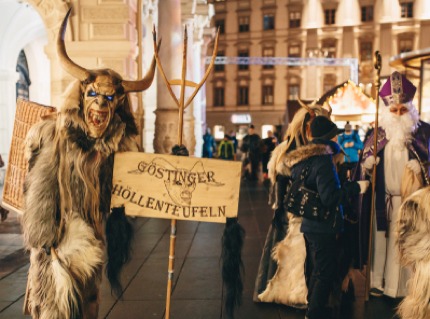 A Krampus in Graz, Austria

Iceland has its very own spooky alternative that goes after misbehaving children: the Yule Cat (Jólakötturinn). There’s nothing cute about this marauding moggy, that roams the Icelandic countryside during the festive season and devours any children who don’t get new clothes. The story behind it is that behaving children are rewarded with new clothes for Christmas, but lazy and ill-mannered children will get nothing – and worse, they become the dinner of this Yule Cat.

The story also encourages children to be generous, donating clothes to the less fortunate and protect them from this monster cat. 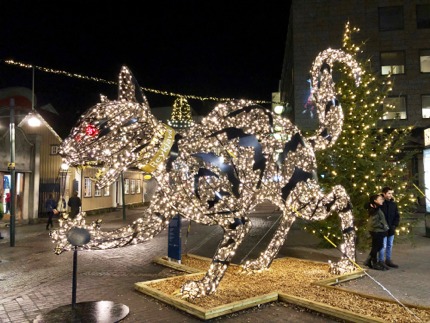 A Yule Cat in Reykjavík

Another area where spooky Christmas traditions abound is South Wales. The parading of the Mari Lwyd or Y Fari Lwyd, meaning the Grey Mare, involves a horse skull placed on a pole and covered with a white sheet to resemble the ghostly body. The Mari Lwyd is usually accompanied by a group of men and together, they try to gain entry into a house or a pub by singing/ saying something witty, and the homeowner or pub-owner has to respond with something wittier to stop the group from entering.

Eventually, though, the Mari Lwyd and its group will be allowed in, as it is considered unlucky to refuse the skeleton horse.

For more information, you can follow this link to the BBC Cymru Wales Facebook page for a short video on the Mari Lwyd.

5. Predicting a marriage in Czechia

We’ve probably mentioned enough of ghastly figures used to encourage good behaviour, so it’s time to turn to love. In the Czech Republic, the festive period will see some single women predicting if a marriage is on the cards by standing in the doorway (facing the front door), taking a shoe and throwing it towards the door. If the shoe lands with the front part pointing towards the door, it means you are going to get married and move away soon. If not, you shall try again next Christmas. 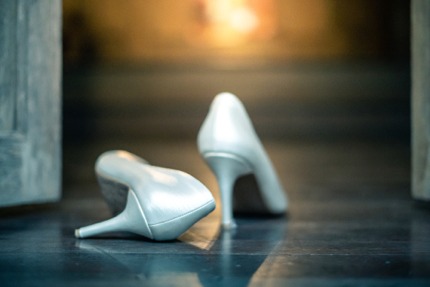 Can your shoes predict a marriage?

6. Using a broomstick to make a Christmas tree, Greenland

With two-thirds of Greenland lying within the Arctic Circle, it is no surprise that Christmas trees – the usual fir, pine and spruce varieties that we are familiar with – can’t grow this far north. Before the influx of artificial and imported trees, the locals would drill holes onto a broomstick or a big branch and cover them with green leaves to make a ‘tree’. Today, this tradition is no longer popular, as it is reasonably easy to purchase an imported tree from a shop.

When it comes to festive food, families across Greenland serve what is usual to them – but probably unusual to you. The main dish is usually a meat dish made from musk ox (a hairy mammal with a musky odour), razorbill (a type of seabird), ptarmigan (a gamebird), hare and whale. Specialities also include Kiviak (sea sparrows called auks wrapped tightly in a seal skin to ferment for months, with oil liberally applied to keep flies away and prevent maggot infestation) and muktuk (a stripe of whale skin, usually eaten raw). 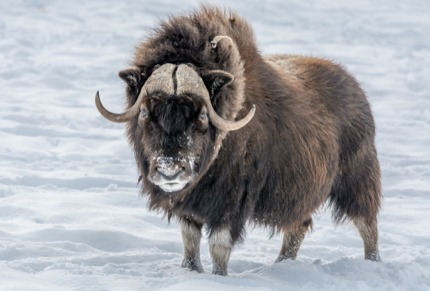 Another bizarre foodie tradition comes from South Africa, where deep-fried caterpillars replace cookies in the festive spread. That’s right, South Africans enjoy munching on juicy Emperor Moth caterpillars (known locally as mopani) at Christmas time. They may look a little unappetising, but fans of this delicacy say that the caterpillars are actually surprisingly delicious, especially if you dip them in spicy peanut sauce.

Forget about Hollywood blockbusters, in Norway, it is the 1973 Czechoslovak/East German fairy-tale Tři oříšky pro Popelku (Tre nøtter til Askepott in Norwegian or Three Wishes for Cinderella in English) that is still warming hearts across the country during the festive season. In 2014, Norway, through the EEA and Norway Grants, even financed the digitisation of this film, ensuring the future generations can continue to enjoy this classic. 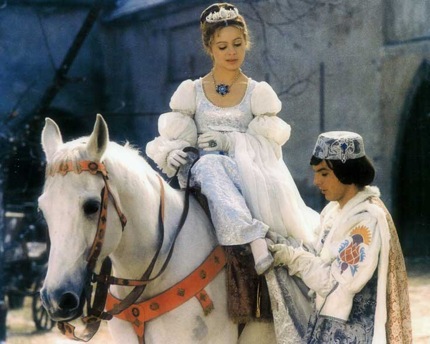 For a week leading up to Christmas Day, locals in Caracas, the capital of Venezuela, would swap their shoes for roller boots and skate to morning mass. The tradition has become so established that roads are closed from 8am to ensure safe passage for the rolling church-goers. Kids get into the spirit, too, sometimes sleeping with one end of a roller skate lace tied around their toe and the skate dangling out of the window so that their mates can wake them easily in the morning.

In Peru, Christmas is extended to the Three Kings’ Day (Bajada de Reyes) on January 6th, the day when the three wise men visited baby Jesus and recognised him as the king and saviour of mankind. On this day, three policemen will dress as Three Kings, riding on horses to the Cathedral of Lima, where a special mass is celebrated before the nativity scene is put away.

December 26th is St Stephen’s Day. On this day, locals on the Isle of Man would dance around a pole decorated with a wren. Back in the days, they would hunt and kill the birds, before distributing the feathers to ward off evil in the coming year. The dead birds would then be buried in churchyards around the island. But nowadays no bird comes to harm – a plastic wren is used instead.

Why did wrens become the target of these gory festivities in the first place? As legend has it, a siren who lured local men to their deaths escaped by turning into a wren and flying away, so each year, the locals would hunt and kill the bird in revenge.

In 2018, the Isle of Man government released a £2 coin commemorating the Hunt the Wren tradition. 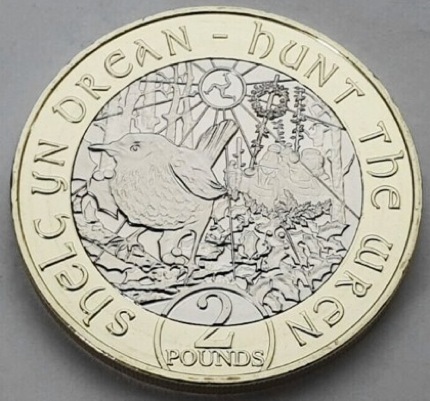 The Hunt the Wren £2 coin

12. Night of the Radishes, Mexico

In the Mexican city of Oaxaca, the locals like to celebrate Christmas by carving radishes. The tradition began when shopkeepers in the city centre began displaying intricately-carved radishes to attract church-goers. In 1897, the mayor of Oaxaca designated December 23rd as the official Night of the Radishes (Noche de los Rábanos) – and artists have been competing to produce the most beautiful radish design ever since. Expect to see radish houses, radish crocodiles, radish snakes and, of course, radish nativity scenes. 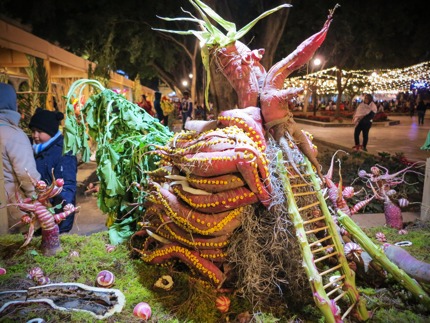 Night of the Radishes in Oaxaca

13. Surfing Santas, Australia and some parts of the USA

If you’re spending Christmas in Australia, Florida or California, pack your surfboard and your Santa hat.

This tradition seems to have started in Australia where December ushers in the first month of summer, with temperatures sizzling between 26°(79°F) and 29°C (84°F) along the glorious west coast, luring surfers to ride the waves. To make it festive, surfers wear a Santa hat or an outlandish Santa costume. In 2015, more than 300 people dressed as Santa broke the world record for the largest surf lesson on Sydney’s Bondi Beach.

The popularity of red-suited surfers has since spilt over to parts of the USA. In Cocoa Beach, Florida, surfers of all ages, dressed up as Santa, gather each year on the morning of December 24th to surf, while in Dana Point, California, there is also an annual Surfing Santa contest to benefit local causes.

In more ways than one, we think the Surfing Santa is a Christmas tradition worth embracing. 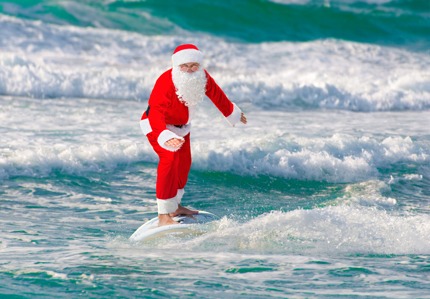 19 things to know before travelling to Cuba