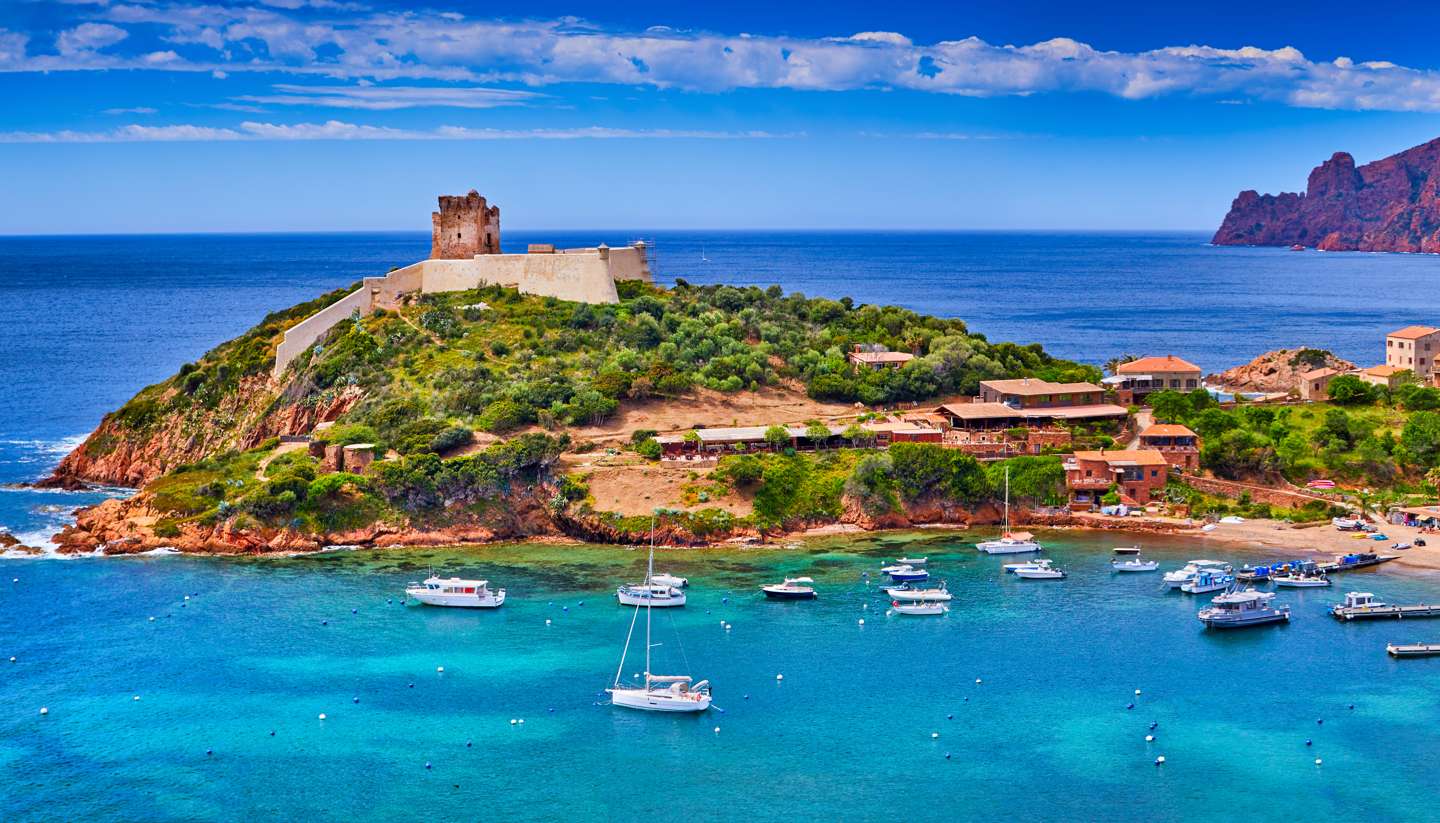 Despite its prime position in the glittering Mediterranean, about 80km (50 miles) east of mainland Italy, Corsica remains something of a secret. This, however, is key to the French-owned island’s appeal: you’ll find other tourists, yes, but never so many that it feels impossible to find solitude.

Corsica’s other best asset is its versatility. While beautiful, sun-soaked beaches and family-friendly resorts are the best-selling points, you’ll also find rugged inland hiking opportunities, adrenaline-fuelled activities and geographical wonders. In a way, Corsica is a destination that resolutely resists neat categorisation – and one to which loyal visitors return to over and over. 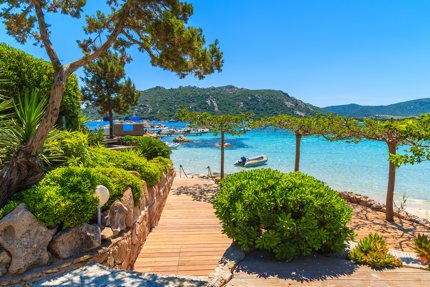 If you prefer a slower but more scenic mode of transport, you can get a ferry to Corsica from France (Nice, Toulon) and Italy (Livorno, Savona). The main port is Bastia, but some routes also serve popular tourist destinations like Ajaccio and Calvi. The service is operated by Corsica Ferries (www.corsica-ferries.co.uk). 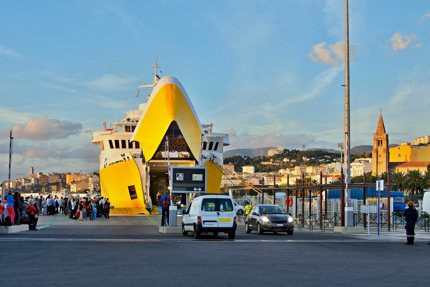 A ferry docks in Bastia

Although Corsica is relatively small, occupying an area of 8,722 km² (3,366 sq miles), slightly over twice the size of Long Island in New York, getting around Corsica does take some planning. The island mostly consists of single-lane roads winding along the coast or requiring drivers to manoeuvre around terrifying mountain switchbacks. In other words, you’re likely to spend a good amount of time in the car if you want to get from one side of the island to another. Consequently, most visitors tend to focus on one corner of Corsica and explore it well. 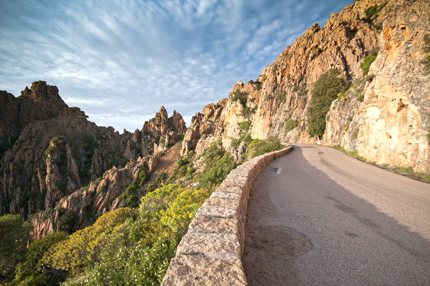 A mountain pass in Corsica

Buses do connect larger towns on the island, but services are infrequent, slow and unreliable, especially outside the summer months – they work if you have plenty of time to spare. Trains connect parts of Corsica’s centre and (mostly) north, but these are narrow-gauge services better used for leisurely sightseeing than time-saving journeys. There are altogether two train lines: the central line (linking Bastia in the north and Ajaccio on the west coast) and the line of the Balagne (linking Ponte-Leccia, a village in the interior, and Calvi on the north-west coast). 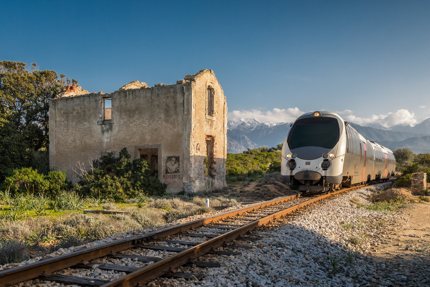 Choosing where to go in Corsica

Bastia is the second-largest town in Corsica and a busy port on the north-east, handling more ferry services than other ports on the island. Its buzzing 19th-century Place Saint-Nicolas is the main hub of Bastia life. The city museum, Musée de Bastia, gives an overview of the region’s rich history, incorporating everything from its early days as a fishing village to the era of Napoleon Bonaparte. 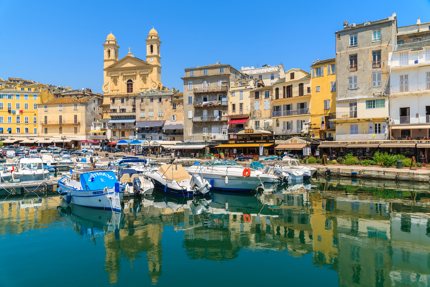 Calvi, on the north-west coast of Corsica, is an attractive resort town and arguably the biggest tourist centre on the island. Its enormous crescent-shaped bay boasts numerous beaches. Calvi also offers a good selection of accommodation, from affordable self-catering options to swanky, luxury hotels. A popular excursion from Calvi is taking the sightseeing Balagne trainline to L’Île Rousse, a laid-back commune some 24km (15 miles) away. 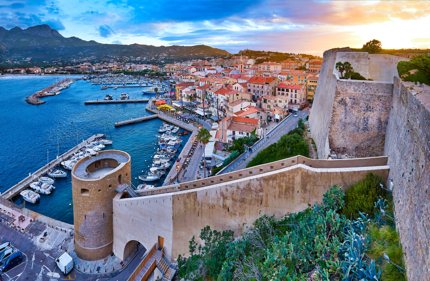 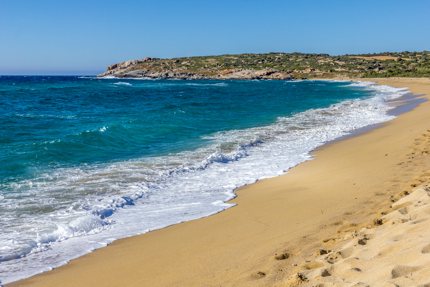 Ajaccio, Corsica’s capital and the largest city, lies on the west coast. It is most famous for being the birthplace and early home of Napoleon Bonaparte. The city’s palm-lined boulevards, pavement cafés, and five museums do help to evoke a cultural air here. If you have time, visit the musée Fesch – established by Joseph Fesch, the uncle of Napoleon Bonaparte, the museum has an excellent collection of Italian paintings. 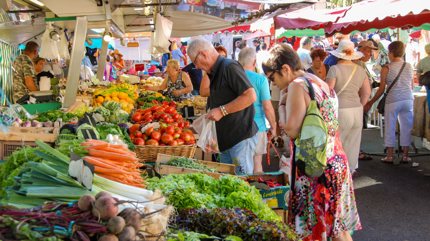 A market in Ajaccio

In terms of beaches, St François is located a short walking distance from the city centre. Nearby, the golden sands of Trottel, Chapelle des Grecs and Scudo are well suitable for visitors to soak up the sun’s rays or take a refreshing dip in the sea. 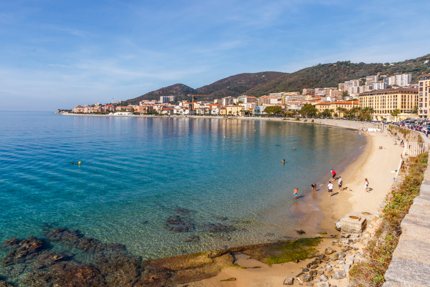 A popular excursion from Ajaccio is going to Pointe de la Parata (Parata Tower) some 12km (7 miles) away. The tower was once a coastal defence built by the Genoese, who controlled the island from 1284 to 1755. Once you reach the end of the path, you will enjoy close-up views of the Sanguinaires Islands. 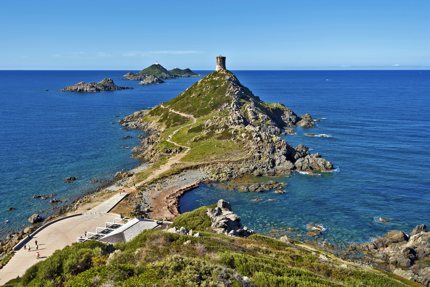 Between Ajaccio and Calvi lie the UNESCO-listed Gulf of Porto and its three stellar attractions: Calanques de Piana, Girolata Bay and Scandola Reserve. Calanques de Piana features a series of imposing outcrops, sculpted by the powerful forces of nature over millennia. Girolata Bay, accessible by boat or by hiking along “Mare e Monti” (postman trail), is a quiet village with a small pebbly beach, but the surrounding waters are teeming with fish. Scandola Reserve, formed when a volcano collapsed into the shimmering sea, was the first site in France dedicated to the preservation of both land and sea natural heritage. Today, an abundance of flora and fauna flourishes here. 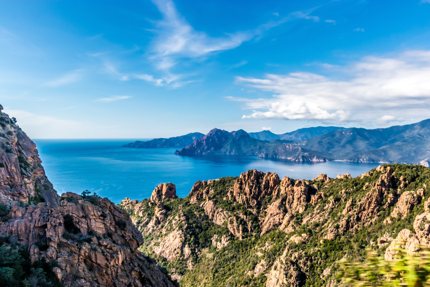 Porto-Vecchio, on Corsica’s south-eastern coast, is another major tourist hub with pricey boutiques beside its white-sand bays. The crescent-shaped and turquoise-watered Palombaggia, just 11km (7 miles) south of Porto-Vecchio, is often regarded as the most beautiful beach in Corsica. While Palombaggia can get busy, the equally-photogenic Balistra further south remains comparatively quiet as it is harder to get to – tucked at the end of a long and narrow gravel road. 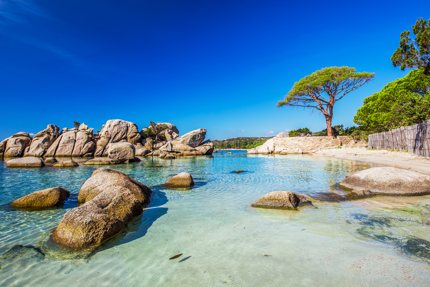 At the southern tip of Corsica sits Bonifacio with its ramparted old town set precariously atop white limestone cliffs. The self-styled ‘picturesque capital of Corsica’ has quite a few attractions, among the must-sees are the King of Aragon’s stairway (a narrow staircase cut by men across the face of the cliff with 187 steps leading to the sea below) and the citadel (with charming, winding streets and hidden shops). 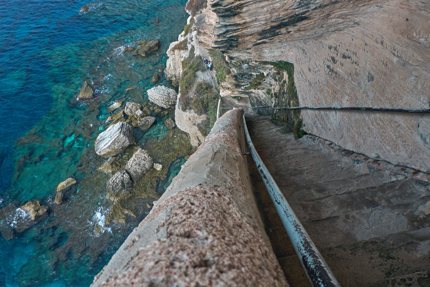 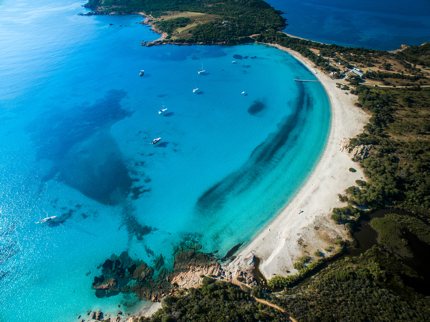 In the mountains of north-central Corsica, Corté was the ancient capital of Corsica. When you get to this commune, you surely can’t miss the ‘eagle’s nest’, the citadel atop a rocky outcrop. From this commanding position, you get exceptional views of the Restonica and Tavignano valleys. 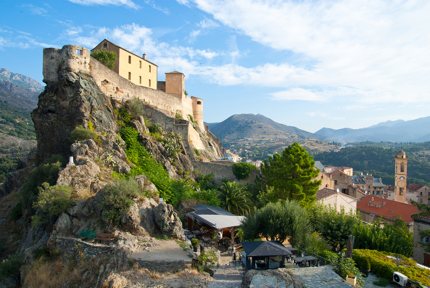 Beyond the beaches, you will find a bumpier Corsica rapidly emerges. Hills and mountains enable scintillating hikes for all abilities; you can do anything from an easy hike to the famous GR20, a multi-day long-distance challenge through the Corsican mountains. Happily, most hiking paths will traverse patches of maquis, flowery shrublands perfumed by eucalyptus, rosemary, myrtle trees and, most notably, sweet, honey-like immortelle plants.

Base yourself in Corté if you’re after a memorable hiking holiday, as this commune is the launchpad for many excursions to the Parc Naturel Régional de Corse (Regional Natural Park of Corsica) with 1,000km (621 miles) of marked trails, as well as to the high-altitude lakes of Melo (the source of the Restonica River), Capitellu and Nino. 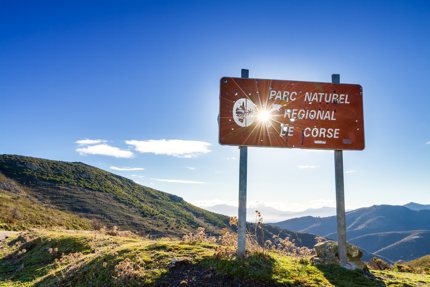 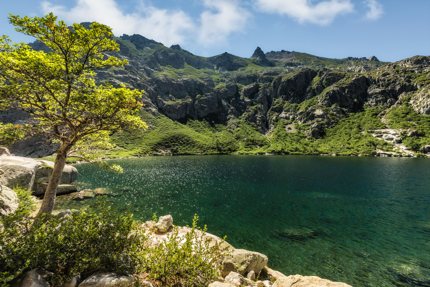 Corsica’s cuisine is undoubtedly hearty, with cheese and meat dishes common in the hills of the interior, and more fresh-fish options closer to the sea. Lunch tends to be a bigger meal than dinner and much produce is home-grown or reared, and therefore full of Mediterranean zing.

Visitors are directed toward signature dishes such as charcuterie (a platter of cured meat) and civet de sanglier (wild boar casserole with carrots, chestnuts and fennel). Both are at their optimum when home-cooked in small-town restaurants and served on scenic balconies.

Grilled red mullet, swordfish and bream rank among the most common seafood plates, especially in restaurants along the coast. Dairy products proliferate throughout the island. Brocciu, a tender ewe’s cheese similar to ricotta, is used in many savoury dishes and desserts, including Fiadone, essentially a lemon-cheesecake flan. Chestnut tart and chestnut fritters are other typical desserts. 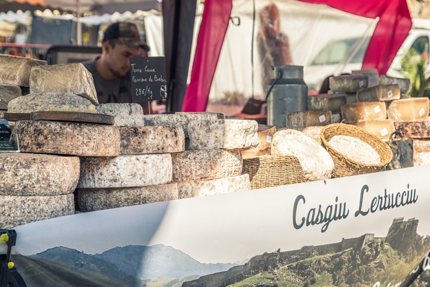 A cheese seller in L'Ile Rousse

Few Corsican wines get exported, so wine connoisseurs will have the chance to unearth some rare, actually-very-good tipples. Look out for the white Vermentino grape, characterised by its zesty undertones. 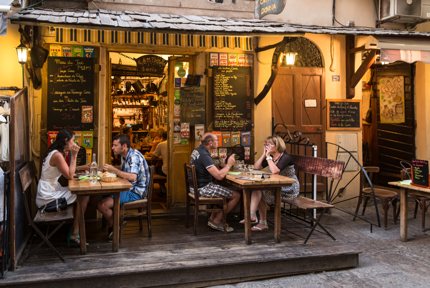 Enjoying a meal in Bonifacio

Corsica isn’t an island renowned for its thumping nightlife. A night out on the island tends to revolve around a good meal and some fantastic French or Corsican wine. Bars are also available for a quiet post-dinner drink.

The best time to go Corsica

Corsica boasts one of France’s best records for sunshine, averaging seven and a half hours per day. Although major towns on the coast enjoy a warm Mediterranean climate, villages in the mountainous interior tend to feel slightly cooler.

The best time to visit Corsica is from June to August when average highs range from 25-28°C (77-82°F); and add a few degrees onto that for southern Corsica (chiefly around Porto-Vecchio, Bonifacio and Propriano), where the temperature frequently tips 30°C (86°F). June to August is also the driest period on the island. Having said that, it is worth mentioning that thunderstorms do occur in some inland areas during the summer months and when it rains, it pours.

If you want to avoid crowds, go between February and May. In February, the average high is 14°C (57°F) and the island may see 55mm (2.2 inches) of precipitation.

October and November are usually the wettest months, averaging 90-95mm (3.5-3.7 inches) of precipitation, so bring a raincoat with you.