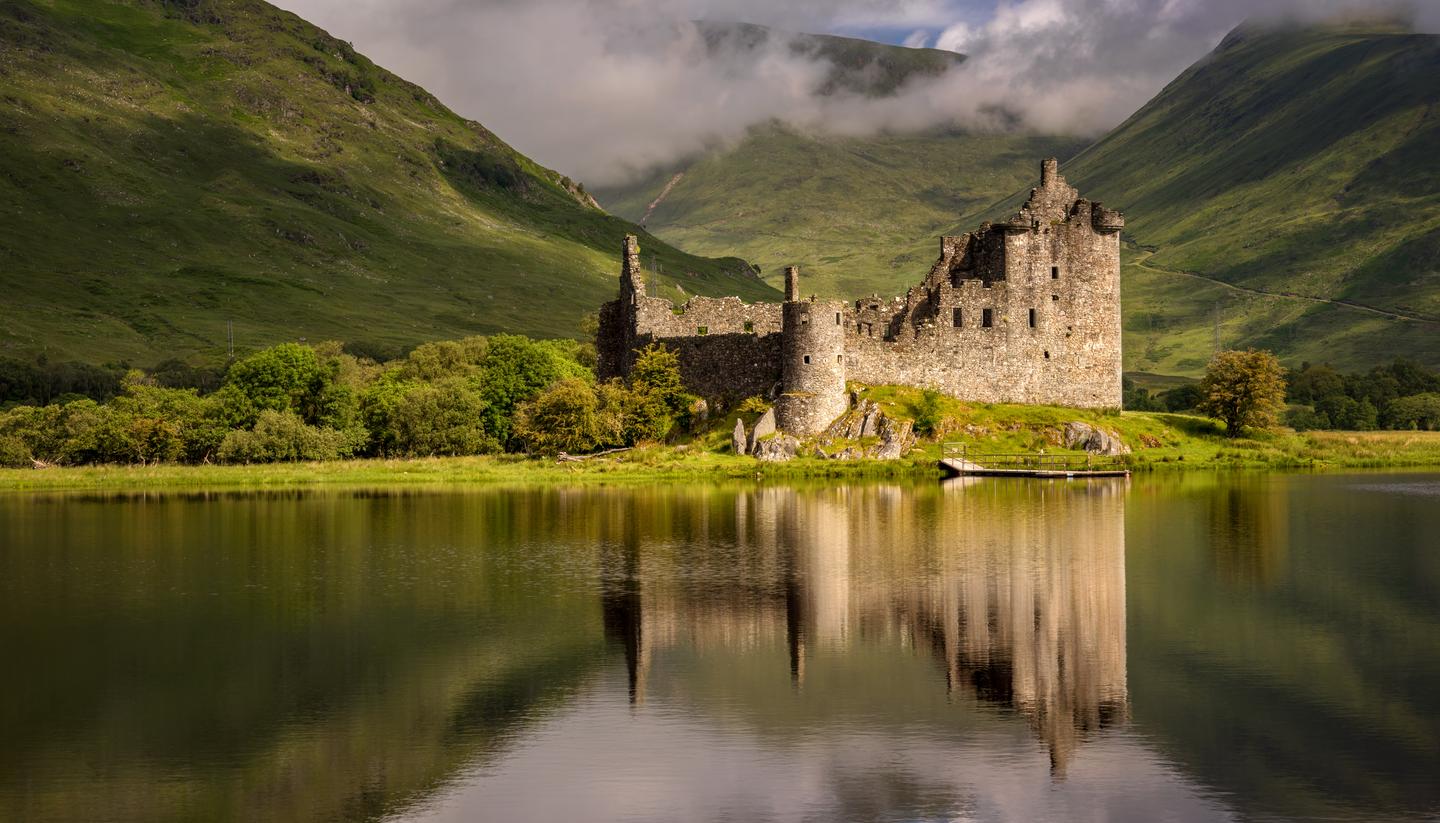 Only a selection of Scotland’s 2000 castles is preserved, restored and open to the public. Here are 10 of the best historic castles in Scotland

Scotland has often been the subject of world-renowned works of media, including Braveheart, Rob Roy and, more recently, Outlander. However, a huge part of Scotland’s appeal is that its history is not just contained in books or movies. The country’s landscape is dotted with buildings of historical significance, some of which have been preserved for hundreds or even thousands of years.

The castles, in particular, are perhaps the best examples of these preserved monuments of Scottish history. Many of them are surrounded by breath-taking vistas that present the unaltered beauty of the nation’s landscape. With that said, we have compiled a list of some of the most popular and famous castles that you need to see when you visit Scotland.

Tucked away in the small Highland town of Dornie, Eilean Donan Castle sits on a small island that serves as a meeting point for Loch Duich, Loch Alsh and Loch Long. The castle offers a direct view of serene lakes with the vast, mountainous Highlands in the distance. This view is especially gorgeous around sunrise and sunset.

Eilean Donan Castle was originally built in the 13th century and served as the historical seat of the Clan MacRae, many of which still live in the area. In 1719, the castle was destroyed by government forces who sought to quell the Jacobite rebellion against the British monarchy, but was gloriously reconstructed by the descendants of the clan in the early 20th century.

Today, you can visit the castle and see the vaulted Billeting Hall and the great Banqueting Hall, along with artefacts on display. 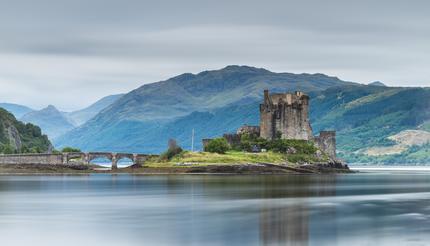 Fyvie Castle was originally built in the 13th century, possibly by William the Lion, the king of Scotland from 1165 to 1214. Later, it served as the open-air court of Robert the Bruce, the hero of Bannockburn in the early 14th century, and the childhood home of Charles I, the King of England, Scotland and Ireland for a brief time in the early 17th century.

In 1599, Alexander Seton, the castle’s owner at the time, commissioned the building of the Seton Tower, the castle’s main entrance, along with a processional staircase. The castle’s opulent exterior is complemented by a stellar collection of beautiful period pieces inside, including furniture and artwork.

The castle is said to be haunted by the ghost of Lilias Drummond (‘Lady in Green’), the wife of Alexander Seton who died in 1601. A secret room in the southwest corner of the castle is said to remain sealed, as it could cause bad luck or even death to those entering it.

Today, you can visit the castle in the summer months. 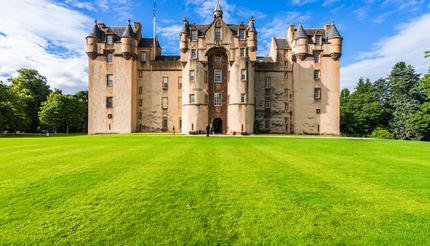 Originally built in the 15th century, Cawdor Castle features three unique gardens that are ever-changing with the seasons, making it a great green space to visit during the summer months.

The castle also has an interesting historical connection to William Shakespeare’s play Macbeth. Those who are astute Shakespearian aficionados will note that the titular character of the play is given the title ‘Thane of Cawdor’, which is one of the prophecies that guides Macbeth to his tragic fate. Although the title still exists and is associated with the castle, the real Macbeth was never Thane of Cawdor nor had the castle been built when Macbeth was the King of Scotland. Cawdor Castle, nevertheless, has been built on such a legacy of myths and legends. In fact, the location of the castle was even said to have been selected by a sleeping donkey! 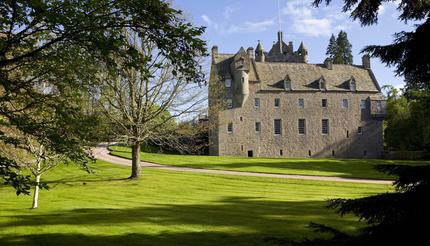 Scotland’s most famous tourist attraction, Edinburgh Castle attracts over 2 million visitors a year. This massive medieval castle-slash-fortress withstood numerous attacks – in fact some historians argue that it was probably besieged 26 times over 852 years, from Donald Ban who invaded it upon the death of his half-brother King Malcolm III in 1093 through to the second Jacobite rising in 1945.

Perched on Castle Rock, Edinburgh Castle offers magnificent, panoramic views of the city. The Mill’s Mount Battery is popular with tourists as this is where the ‘One O’Clock Gun’ is, unsurprisingly, fired at 13:00 every single day with the exception of Sundays, Good Friday and Christmas Day. The Crown Room is another attraction – it houses the Honours of Scotland (the oldest Crown jewels in Britain) and the Stone of Destiny (an ancient symbol of Scotland and will only leave Scotland when there is a coronation in Westminster Abbey). The castle’s esplanade hosts the annual Royal Edinburgh Military Tattoo every August. This musical performance of pipes and drums by the Scottish regiments attracts over 200,000 attendees and is broadcast to 100 million people around the world. 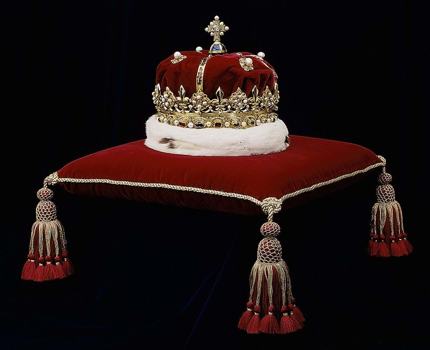 Honours of Scotland, the oldest Crown jewels in Britain, are on display in the Crown Room, Edinburgh Castle

Drummond Castle is well-noted for its incredible gardens featured in many films including Rob Roy and the Outlander series. Thought to be one of the most beautiful formal gardens in Europe, the gardens date back to the 17th century but also incorporate elements of redesign in the 19th century.

Since the castle is still used as a private residence, it is not open to the public. However, you can visit the gardens, which are open from May through October each year. 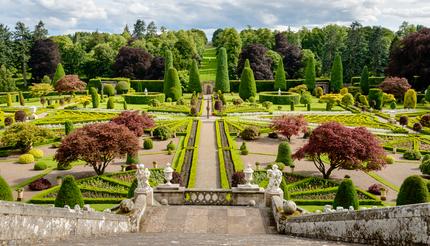 With a population of just 48,500, it can be hard to believe that Stirling is a city. But when you consider its importance in the history of Scotland, it is hard to argue otherwise. Stirling is situated at the point where the Scottish Lowlands and Highlands meet, making it valuable to anyone who sought control over Scotland. The city, and the Stirling Castle which is surrounded on three sides by steep cliffs, are representative of the area’s significance.

Today, worthy diversions include the lovingly-restored Royal Palace, the Great Hall, the Chapel Royal and the Stirling Tapestries. Beneath the palace, there are five vaults filled with fun and interactive exhibitions for children.

13km (8 miles) north of Stirling Castle is the lesser-known Doune Castle, but sharp-eyed movie buffs will immediately recognise that the castle was featured in Monty Python and the Holy Grail, the pilot episode of Game of Thrones and also in Outlander.

If you are visiting, we recommend you get the audio guide. Narrated by Terry Jones, the co-director of Monty Python and the Holy Grail, the audio guide is informative yet hilarious; probably the best audio guide you would come across from a historical monument. 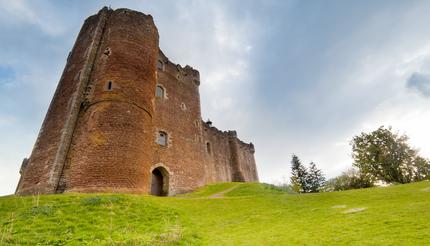 Urquhart Castle, or should we say the ruins of a once grand building, attracts about half a million visitors a year and a majority of them come to climb the Grant Tower and take in sensational views of Loch Ness. Many, perhaps, secretly hope that the elevated platform on top of the tower would offer them a better chance to catch a glimpse of the mythical Loch Ness Monster (‘Nessie’ to the locals).

Within the castle ground, you will find a modern replica of a trebuchet (a type of catapult), giving you a chance to see siege weaponry in person and imagine the many battles that took place here centuries ago. 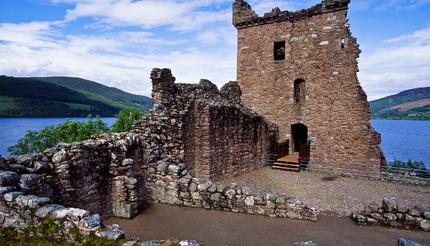 If you like haunted castles, Culzean Castle should be at the top of your list as at least seven ghosts are said to lurk in the dark corners of the massive compound at night. Beyond the castle, you will find secret follies hidden among trees, a swan pool, a deer park, an ice house, a walled garden, and a playground for children.

Culzean Castle was once the home of the Marquess of Ailsa, the chief of Clan Kennedy, a dynastic family who once held some influence in Scotland; not dissimilar to their American namesakes. The family gave the castle to the National Trust for Scotland on the condition that the apartment at the top of the castle would be given to President Dwight D. Eisenhower for his role as the Supreme Commander of the Allied Forces in Europe during World War II. The apartment is now a six-room boutique hotel.

The castle is open from March to October, but the playground, wild woodland, farm and shop tend to stay open year-round. 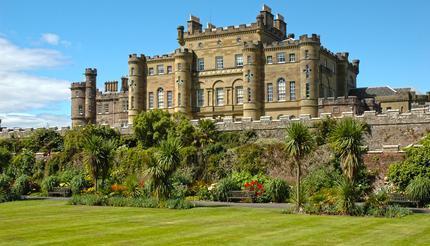 A country home of the British royal family since 1852, Balmoral is where Queen Elizabeth II and her family gather every summer. It is here that the Queen can take a breather from her busy schedule – she once admitted that she does absolutely nothing for six weeks when she is in Balmoral, according to a BBC documentary aired in February 1992.

Balmoral is a working estate, meaning farmers, rangers, farriers and even distillers work alongside one another to manage its farmland, animals and whisky production.

The castle is open partly to the public between the months of April and July. It is said that sometimes when the Queen arrives early to her favourite holiday home, she walks among the public and has successfully avoided detection. In fact, according to her former protection officer Richard Griffin, a group of tourists once asked the Queen, “Have you ever met the Queen?” – to which she replied “No,” but she pointed at one of the nearby policemen and said, “But he has.” 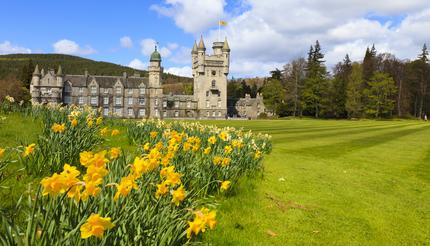 Before you go, see the Scotland travel guide.