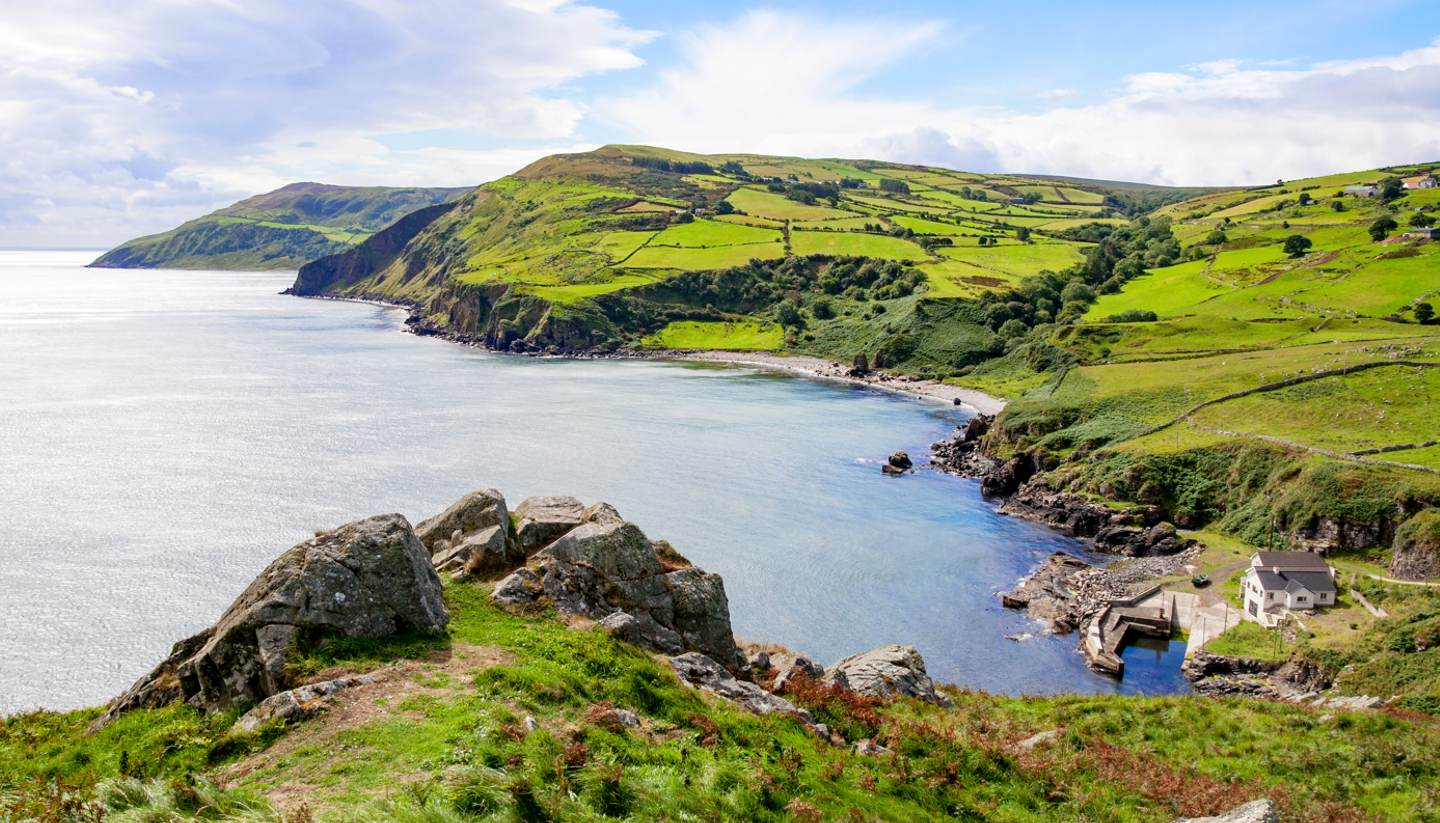 Northern Ireland’s Causeway Coastal Route is one of the world’s most beautiful routes and is often included in many people’s bucket list. Starting from the bustling Belfast and ending in Londonderry (or Derry) on the west bank of the River Foyle, this 248km (154 miles) route follows most of the stunning coastline and offers plenty of charming villages and ruined castles along the way. Plan to spend four or five days checking out the scenic spots along the way, some of which require taking a bit of a detour.

The Causeway Coastal Route is clearly signposted as soon as you leave Belfast behind. It won’t be long into your journey before the dramatic coastal scenes start to unfold, as well as The Glens of Antrim, an area of outstanding natural beauty. The first stop for most people is Cushendun, a tranquil seaside village with beautiful Cornish cottages designed by British Architect Clough Williams-Ellis. Take the chance to visit Cushendun Caves, which provided the backdrop for The Stormlands in Game of Thrones. 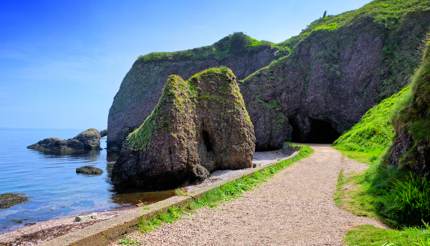 From Cushendun, if you take the Torr Road instead of A2, you will come to Torr Head, a rocky windswept headland that is also the closest point to Scotland.

Ballycastle is another worthy stop. It has a small museum and is the gateway to Rathlin Island. Rathlin’s bird colony is well noted among keen birdwatchers. The island is also steeped in legend – it is said that while Robert the Bruce took refuge in a cave here, he saw a spider which tried relentlessly to rebuild its web, and the action inspired Robert to continue his fight for Scottish independence. If you like science more than legend, visit East Lighthouse – the site where the world’s first commercial wireless telegraph link was created in 1898 by George Kemp, the assistant of Guglielmo Marconi. Speaking of Marconi, there is a memorial of him in Bonamargy Friary, just a short drive from the marina where you can catch the Rathlin Island ferry. 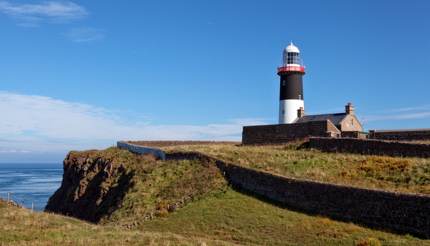 If you want to see the atmospheric road with intertwining beech trees where Arya Stark travelled with others to join the Night’s Watch in a cart in Game of Thrones, then make a detour to the Dark Hedges, 13km or 8 miles south of Ballycastle. 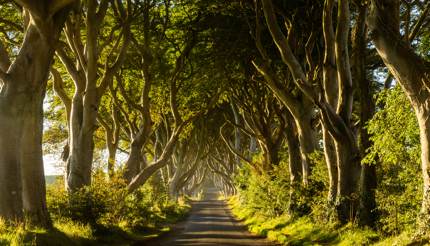 The Carrick-a-Rede rope bridge deserves special mention. Linking the mainland to the small island of Carrick, this 20m (66ft) bridge is suspended almost 30m (98ft) above large caves and crashing waves. You will need to get a ticket from the National Trust site, but bear in mind that sometimes it is closed due to high winds. 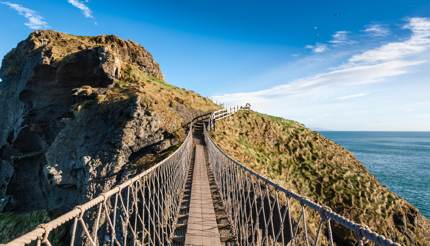 Whitepark Bay, just 5km (3 miles) east of Carrick-a-Rede, is another picturesque coastal village. With sandy shores, sweeping bays and varied grassland, this seaside haven lures day-trippers and also longer-term visitors like archaeologists. It is believed that the mounds around the area are prehistoric burial sites and several objects including flint tools and bone combs were also found at the nearby Portbradden cave.

The only UNESCO World Heritage Site in Northern Ireland, Giant’s Causeway has some 40,000 massive basalt columns rising up from the sea, forming a natural pavement. The sights are so dramatic and stunning that you could easily visualise giants striding over the sea from here to Scotland in your mind. Time your visit in the evening to watch the sunset – it is absolutely magical. 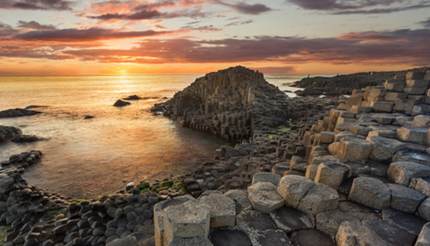 Not far from Giant’s Causeway is Portballintrae. Once a potential site for Donald Trump’s golf course (but eventually his team chose Doonbeg in County Clare), this village is mostly associated with the wreck of La Girona, part of the Spanish Armada that sailed from Corunna in 1588 to invade England. Over many months in 1967 and 1968, a team of Belgian divers located the wreck and brought up a treasure trove of gold and silver coins, armaments and various objects – which are now on permanent display at the Ulster Museum in Belfast.

About five minutes’ drive south of Portballintrae is Bushmills, home to the Old Bushmills Distillery, the oldest working distillery in Northern Ireland and still handcrafting small batches of whisky just like the old masters did over 400 years ago. You can take a guided tour and sample some exceptionally smooth whiskey like the Red Bush and the Black Bush labels. 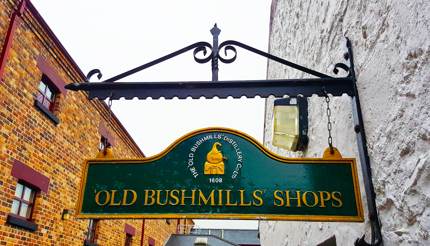 If you continue along the Causeway Coastal Route from Portballintrae, you will soon see the ruined, medieval Dunluce Castle, also featured in Game of Thrones as the seat of House Greyjoy. Perched on the edge of a rocky cliff over the North Atlantic, the castle was abandon in 1639 when the kitchen, along with kitchen staff, fell into the sea after a bad storm. It is now managed by the Northern Irish Environment Agency and is open to the public. 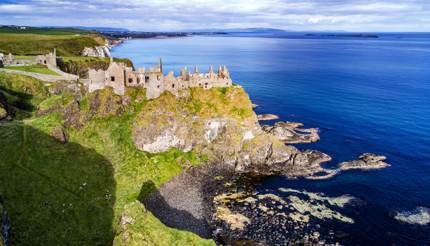 It is impossible to miss the circular Mussenden Temple standing tall on a cliff edge – the setting evokes a strong sense of solitude. Early morning and late evening are the best times to go if you are a keen photographer. Built by the 4th Earl of Bristol and Bishop of Derry for his niece Frideswide Mussenden, it is said that the architecture was inspired by the Temple of Vesta in Tivoli, near Rome. 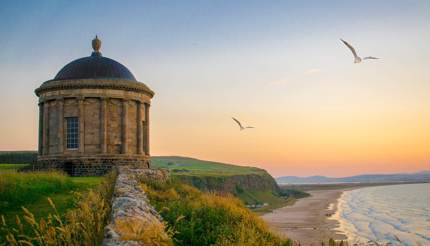 About a 30-minute drive south of Downhill is Roe Valley Country Park, which is crisscrossed with a myriad of riverside walks and woodland trails. Go walking, grab your fishing gear and go angling at the salmon and trout fishery, visit the Green Lane Museum or relax with a cup of afternoon tea at the Ritter Tearoom – it is easy to spend a blissful afternoon in this park.

The route ends in Derry, Ireland’s only remaining, completely walled city which combines a riverside setting with a string of historical sights. Take a walk around the walls, visit the neo-gothic Guildhall, attend one of the many events – you will be quickly charmed by the second-largest city in Northern Ireland. 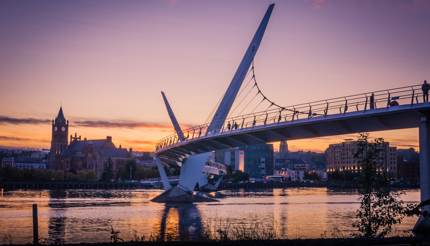 Before you go, check out our Nothern Ireland Travel Guide.