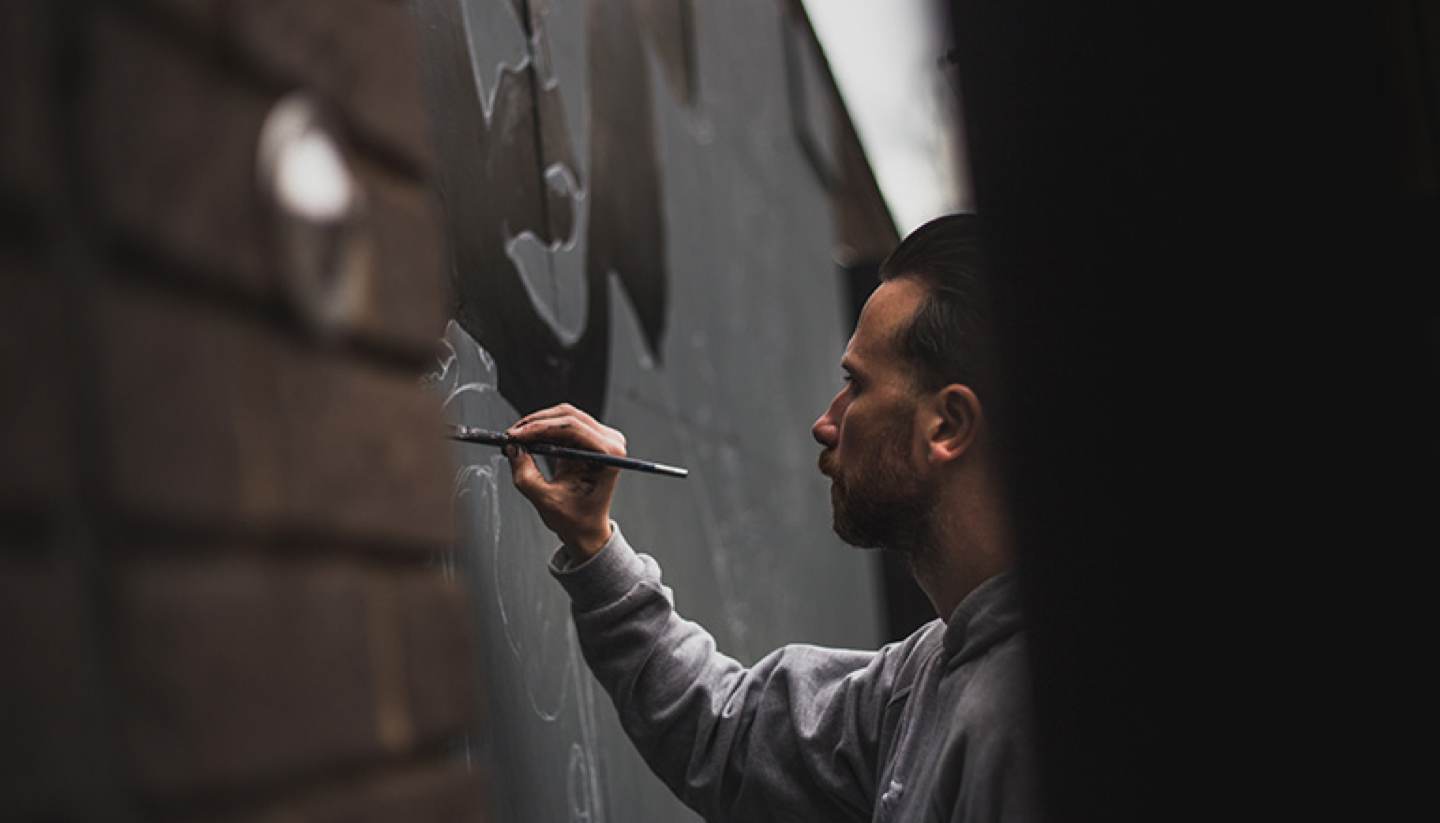 “It’s easy to get caught up in the general gloom and forget about how beautiful this place can be and how much potential we have.”

Eelus is an optimist. Streaks, flashes and glimmers of neon colour lift the spirits of his often anxious and despondent characters, each work perhaps an analogy for urban art’s penchant for bringing a little life to everyday routines.

He’s one of several artists releasing a limited edition print specifically for collectors attending Moniker Art Fair this year – an unusual scenario for the artist, but as he points out, it’s an unusual event.

“Moniker is one of the only art fairs I bother with, mainly because a lot of my friends exhibit every year and it’s a good excuse to catch up and make connections,” he says.

“The gallery and I thought it would be fun to produce a very limited special edition of that print, available in person only from the Lawrence Alkin Gallery stand at Moniker. It’s had a sprinkling of extra love put into it with more colours and it’s darker and more mysterious in nature than the standard edition.”

Eelus is a veteran of the scene, based in Brighton but exhibiting regularly worldwide since his debut 11 years ago. He often works on a huge scale on street wall murals, but exhibits with prints starting from the low hundreds and more complex lenticular and special limited works for higher prices. His prolific output, it seems, can be attributed to a mind that can’t help but keep moving. 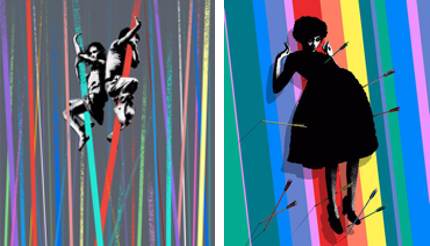 “For the most part I’m sick of the sight of most paintings before the paint is dry. I’m already planning three pieces ahead and can’t wait to get the current painting out of the way so I can move on to the next project.

“Some works from the past haunt me, like ugly children I want to lock in the loft. But the internet gives those monstrous little bastards drum kits, and they bang away up there, refusing to be forgotten. Swines.”

‘We All Fall Down’ is a screen print edition that will be released on October 11th at the opening of Eelus’s solo show Dance Boldly Through The Storm at Lawrence Alkin Gallery in London.

As a veteran of the Bristol street art scene, taking to the walls just over two decades ago, it’s fair to say Sickboy is allowed strong opinions on the art market. Which is lucky.

“I’m very aware I could be doing the whole ‘fluffy spiky’ kind of art that’s out there – Carebear-with-a-machine-gun kind of deal – but I think art should be more reflective, or introspective, and have greater depths than that, actually,” he says.

“I think when everything blew up, a lot of people ended up flooding their works early on – there was a realisation that you could sell out these limited runs of prints fast, so suddenly it got tempting for them to do 10 runs in a year and just saturate the market.”

Moniker Art Fair 2017 will be the fine art and graffiti legend’s first fair as an exhibiting artist, and we talk as he busily prepares works for the show, with his twisted, colourful and otherworldly imaginings available as prints starting in the low thousands. His discomfort with the potential trappings of the gallery and fair scene stems, he says, from the somewhat homogenised processes that have developed as the art world has caught on to street art’s potential. 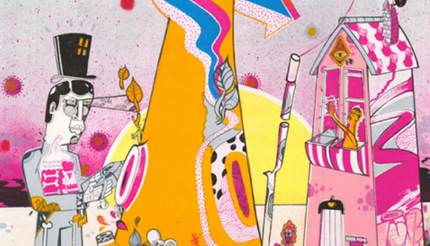 “Painting something outside, waiting to get noticed, sticking it on a canvas: it’s not doing anything for the scene is it? It should be about painters working on bigger ideas and contributing something new.

“Up until a couple of years ago, I thought every fair was a bit ‘watercolour challenge’, you know? I even only tended to exhibit solo shows in galleries that were outside of that ‘gallery world’,” he says.

“Moniker is a different kind of fair, and I’ll be helping to curate the edition in NYC next year. But for 2017 in London, I’m putting together a mini-installation for Moniker, and really it’s intended to show people where I’m at right now. The paint will pretty much still be dry.”

Sickboy is one of 100 artists exhibiting alongside and with 40+ galleries, running 5-8 October at The Old Truman Brewery, Brick Lane, London.

Born in Cork in Ireland and now based in London, Fin Dac describes himself as a non-conformist urban/stencil artist with influences ranging from graphic novels to Francis Bacon and Aubrey Beardsley.

Using fine art styles alongside sprays and stencils as a rejection of typical urban technique, his finished works exist within a genre he describes as “urban aesthetics”, riffing on a 19th century art movement.

He’s notoriously reclusive, spending the majority of this decade working on pieces in his studio and avoiding the urban art scene.

“In fact, I only first visited Moniker two years ago. Being exhibited at the fair has come about because of my good friend Jewel [Goodby], who has a new gallery debuting at the fair this year,” he says.

“It’s quite rare for me to be exhibiting in this way, as I tend not to involve myself with fairs or galleries. I’m aware that a lot of artists think differently but it’s just not how I work; when I’m creating my art I try not to think about how it might sell or who it will sell to.” 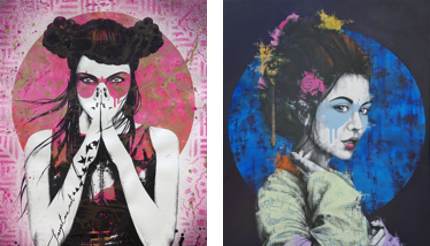 Despite (or because of) this hermitic attitude, Fin’s work has included commissions for The Royal Albert Hall, Armani, G-Star, Red Bull, Jägermeister and the London 2012 Olympics.

Large-scale works are currently available starting from around £1,000, and his murals of ‘modern geishas’ painted as far afield as Brazil, France, Poland, Slovakia, Spain and the USA have already won international attention.