The theme park of hell 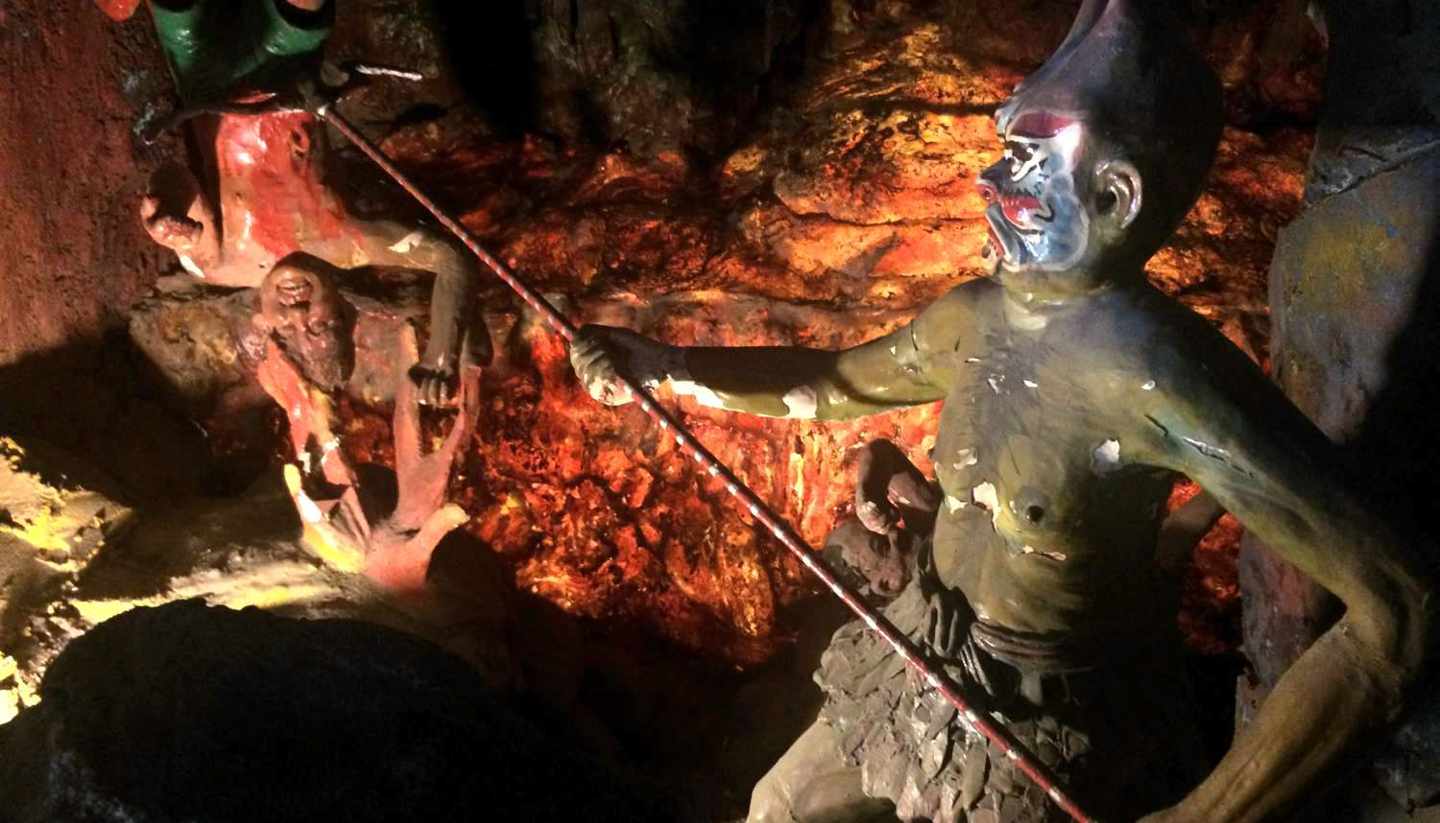 Would going a theme park filled with monstrous figures and fiendish underworld torture make you want to do more good deeds? Vivien Yap finds out

Two giant statues guard the entrance to this particular hell – one with the face of a horse and the other an ox. Both are fashioned to look like ancient Chinese warriors, but their once glimmering paint has started to peel, exposing spots of white plaster. They look amateurish and dated, like two abandoned props in a B movie. 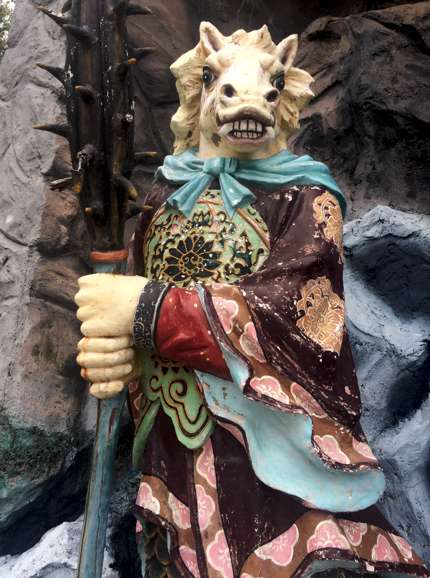 A horse-faced warrior guarding the entrance to hell

Not just them, but the entire Haw Par Villa looks out of touch with today’s smartphone-wielding, modern society. Built in 1937 by the brothers who introduced the world to Tiger Balm, the villa was once a top attraction in Singapore. It teemed with tourists who came to see gigantic statues extolling the virtues of Confucianism. Today, the park is chiefly known for being odd and morbid, which probably explains why I’m the only person here despite the free admission. I’ve come here because, believe it or not, Haw Par Villa has a 4-star rating on TripAdvisor. The few brave souls who’ve dared to venture here must have loved it, and I’m here to find out why.

It was in 1985 that I first visited the villa. Back then, I was a skinny little kid and the theme park was positively enormous to me. The villa was what a villa should be in those days: big, ostentatious and imposing, with a finely landscaped garden that boasted a sea of blooming bougainvillaea. Heaps of fallen petals liberally scattered on the walkways which meandered through the compound.

Crafted to depict Chinese moral stories, colourful statues in all shapes and sizes loomed above my head. I held onto my mother’s skirt as we mindfully stopped at each station. I remembered two grotesque figures vividly well. Known as “HeiBai WuChang”, aka the Black and White ghosts, the duo looked menacing. The White ghost was particularly scary – tall and thin, wearing an oversized hat that accentuated his sickly face which looked paler than a bleached cloth. His tongue bleeding red, so long and slender it almost reached his waist. I was petrified, left frozen in my tracks. My mother told me that they come out at night to catch misbehaving children. Well, I never missed a piano lesson after that. 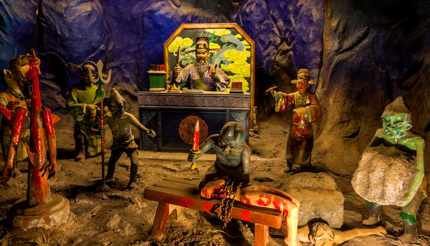 A headless figure in the Ten Courts of Hell

There is no sign of the Black and White ghosts now. Surveying my surroundings, I feel relieved and disappointed in equal measure. In the Ten Courts of Hell, the models are only a few inches tall and not especially well made; the dim lighting doesn’t help either. There are a few action scenes, like one where a model is hung upside down and pierced by a three-pronged fork. Another spectacle shows a headless figure chained to a bench as a grey-skinned, knife-wielding dude hovers above the body. Apart from that, the models stand or bow in awkward poses, supposedly doing something (although I can’t quite work out what). So I crane my neck and read the tiny text in Chinese, then in English. Perplexed, I stop, do a double-take and read the signs in both languages again, as if doing so might help me grasp the meaning. It doesn’t really.

The laws in these Ten Courts of Hell make some depictions of underworld look like child’s play. Get this – disrespecting elders will get your heart cut out in the third Court of Hell, while wasting food will see your body chopped in half in the sixth Court of Hell. And if you cheat on an exam, bless you, you’ll have your intestines and organs ripped out in the eighth Court of Hell. Ouch! If you don’t think that’s harsh, you will be damned in a small pool with ten thousand turtles – ok, I’ve just made that up because I’m shocked by such extreme vengeance in this particular hell. I’m also getting a little bored now. 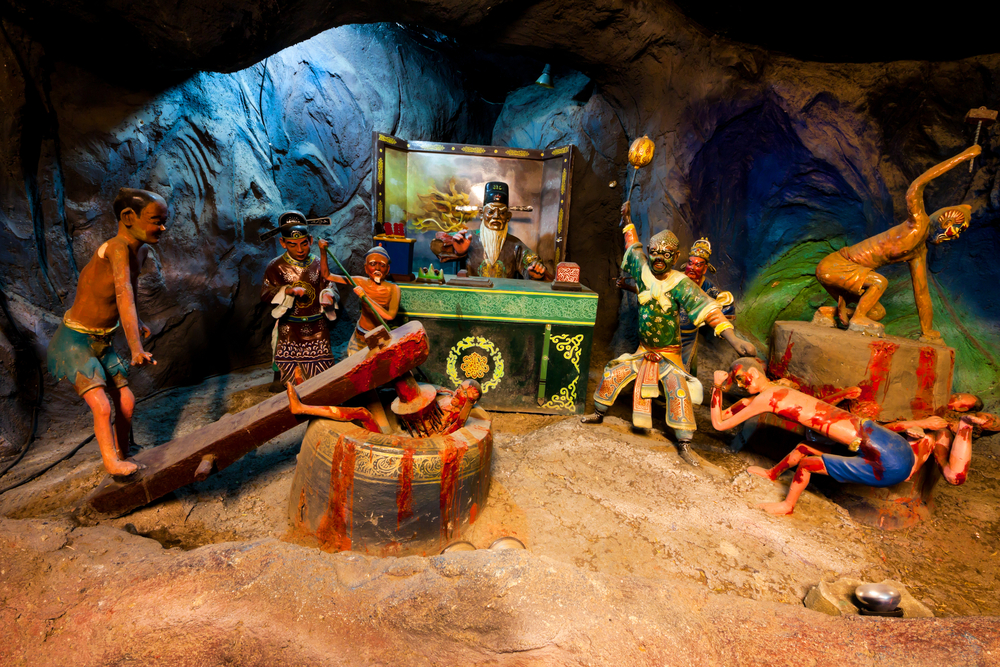 A tortune scene in the Ten Courts of Hell

The journey through hell lasts about 15 minutes, making it one of the longest and zaniest 15 minutes of my life. Nearing the end, I’m so glad to see the exit sign that I quicken my pace.

Once outside, the oppressively hot and humid weather instantly engulfs me. The afternoon sun burns my skin, beads of sweat forming on my forehead. The air is breezeless, pierced by the roar of speeding traffic from the West Coast Highway below. I’m all alone in this deserted villa. 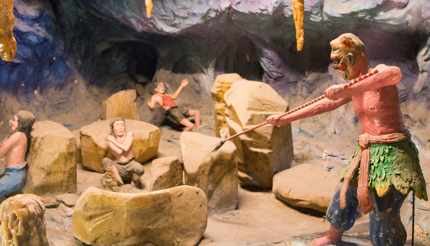 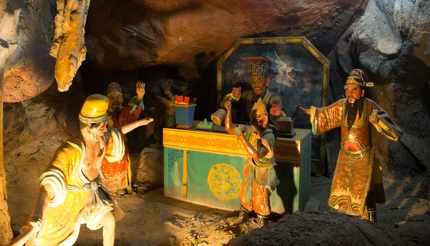