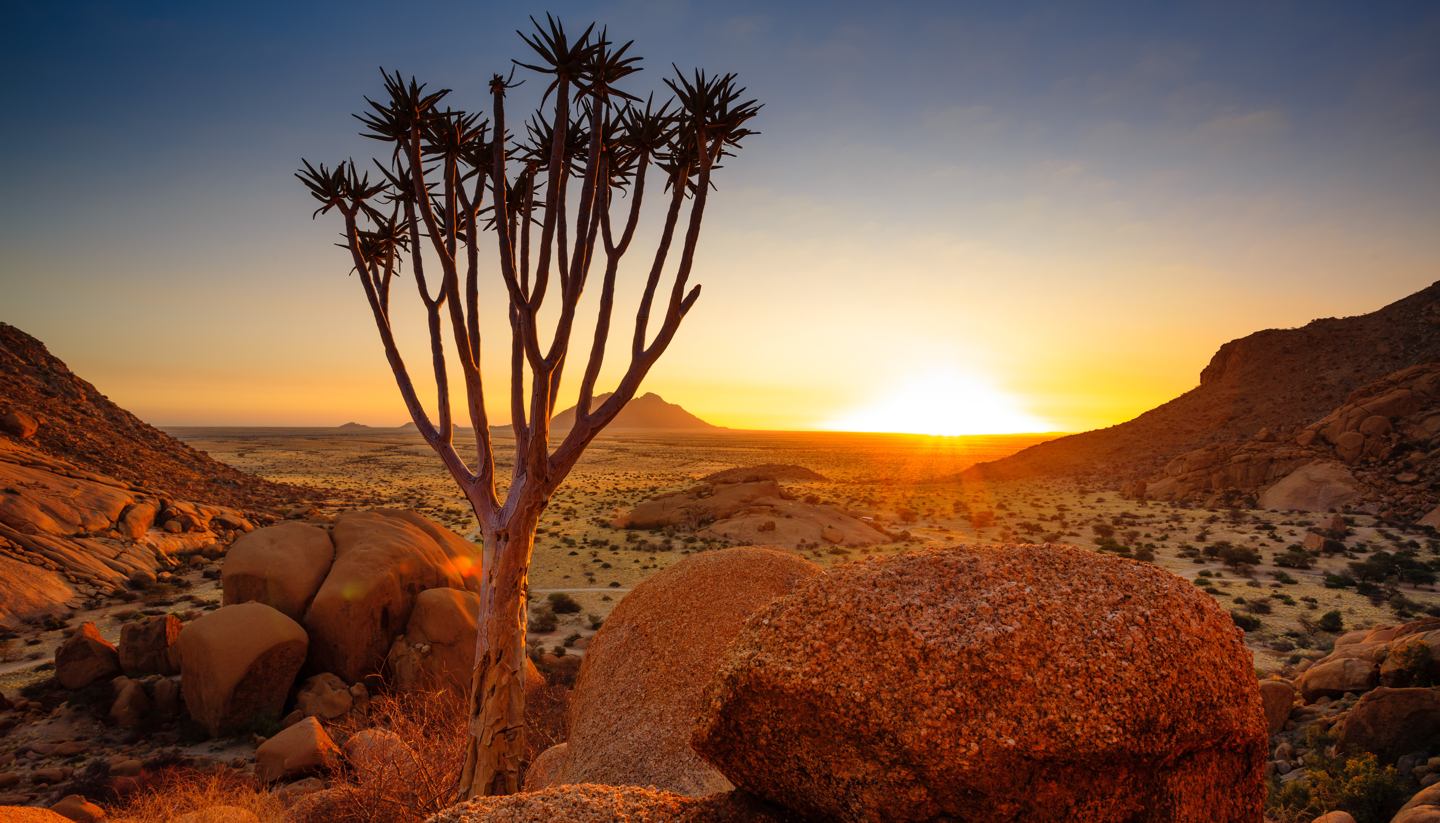 Namibia has a sub-tropical climate with most of the country enjoying a staggering 300 days of sunshine a year, making it a year-round destination.

Along the coast, the cold Benguela Current keeps the area cool and rain-free year-round, but the air can be humid and when the water vapour condenses, dense fogs are formed, especially in early mornings, lending a mysterious edge to the area. In winter (July to September), temperatures along the coast can increase a few degrees when a hot dry wind (known as Berg Wind or Oosweer) blows from the inland to the coast. In the coastal town of Swakopmund, average highs range from 20°C (68°F) in July to 28°C (82°F) in February.

The Caprivi Strip has a unique tropical climate, with heavy rainfall that often leads to flooding between November and April. The wet season is a prime time for birdwatching as many migrating birds are present. On the contrary, June to September is dry, so animals tend to gather around waterholes and rivers to quench their thirst, making it an excellent time for game spotting.

The Fish River Canyon, the largest canyon in Africa, lies in the south of Namibia. The highlight here is a five-day 90km (56mi) hiking trail along the canyon floor to the Ai-Ais Hot Springs, which you can only hike from mid-April to mid-September.

The best time to visit Namibia depends on your activities. For travellers who prefer to avoid the intense heat of high summer (December to March), travelling during the winter months (May to August) is a good option. Birdwatchers may prefer to visit the Caprivi Strip between November to April, while the best time for safari-goers is from June to September.

Light cottons and linens are best, with a jacket for cooler evenings. Sun hats, sunglasses, and sunscreen are essential. Neutral colours are recommended for safaris and game viewing, while ankle-height boots are recommended for hikers as there are poisonous snakes in the desert.

Insect repellent is also useful during the rainy season or if you are visiting the Caprivi Strip.

Namibia is a large, mostly arid country in southwest Africa. It borders Angola to the north, Botswana to the east, and South Africa to the south. In the northeast corner, the Caprivi Strip is a narrow panhandle of tropical Namibian territory juts towards Victoria Falls in Zambia. To the west is a 1,572km (977mi) long stretch of coastline, with the northern section shrouded in fog and littered with shipwrecks.

The Namib, believed to be the world's oldest desert, runs along the coast of Namibia. The northern part of it lies the famous Skeleton Coast, an area where ships have run aground in thick fog that hovers below hot, dry air. To the south of the Skeleton Coast sits the Namib-Naukluft National Park, Namibia's largest conservation area, home to desert-adapted wildlife – including chacma baboons that can go for two weeks without drinking water and the Welwitschia plants that live for more than a thousand years in this harsh environment.