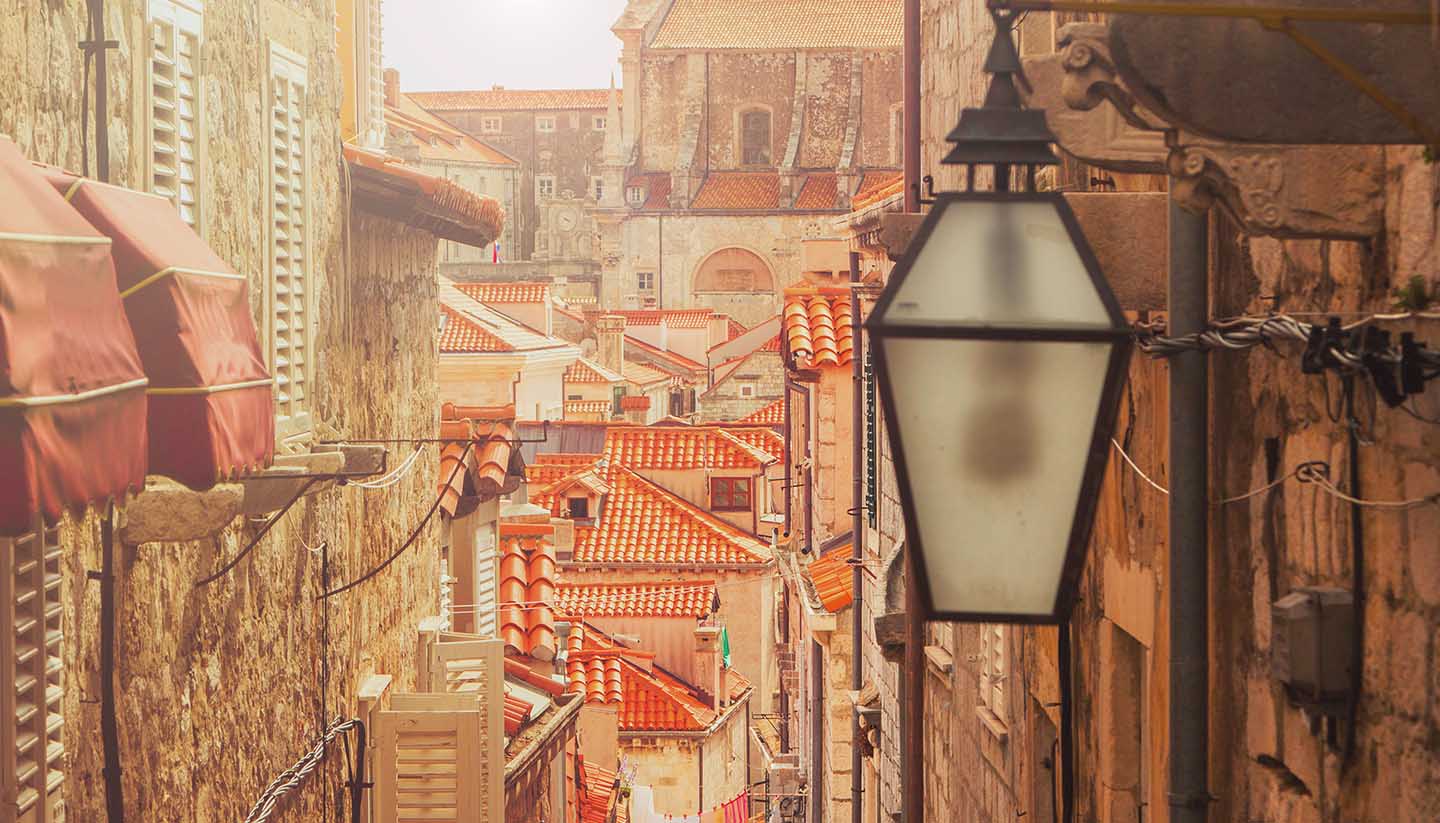 the IDs1388Dubrovnik Airport
Places in Dubrovnik

“If you want to see heaven on Earth, come to Dubrovnik”, proclaimed the Irish playwright George Bernard Shaw – and he wasn’t wrong.

A vivid collection of crimson architecture perched on a cerulean bay; few cities can claim to be more picturesque than Dubrovnik. But there’s more to the city than its aesthetic charms and a glimpse at its history is enough to show you why.

The whole of the mediaeval old town is UNESCO listed, including the ruler-straight Stradun, the 300m (984ft) road that bisects it. There’s much to gawp at, including the Sponza Palace, the Rector’s Palace, St Blasius Church and the Franciscan Monastery. Not all of it is as old as it appears, however, as 95% of the city was destroyed by shelling during the Yugoslav Wars and later rebuilt, giving the place an oddly museum-like quality.

In recent years, Dubrovnik has reinvented itself as a major holiday destination in Europe. Many high-end restaurants have sprung up to serve happy tourists toothsome local seafood and Croatia’s many excellent wines. The city’s night scene is vibrant too, with energetic clubs and open-air bars thronged with well-heeled guests. If that isn’t enough, the cast of Game of Thrones came here to film the King’s Landing scenes – making Dubrovnik the essential stop for many fans.

But the real beauty of Dubrovnik is to be found in the quiet, shaded streets where pretty potted plants adorn beautiful balconies, the odd washing line is strung between shuttered windows and incongruous doorways lead to hole-in-the-wall bars.

For the best view, take a stroll atop the medieval walls. From here, the glittering Adriatic Sea beckons, speckled with islands and cruise ships, wooden galleons, speed boats, sightseeing vessels and kayakers. On sea or on land, Dubrovnik shines as one of Europe’s prettiest places.

This 198-room hotel in São Paulo, with its mammoth convention centre, flatters beyond its 4-star billing. The rooms behind Excelsior's art-deco frontage are plain and businesslike, yet excellent value. Wi-Fi is free, rooms come with LCD TVs and there is a bar and fitness centre onsite. The location is also close by downtown Praça da República with nearby cultural icons such as Teatro Municipal and Edificio Copan. Staff speak English and can help book tickets and tours. Breakfast included.

It would be a shame to stay in Dubrovnik without waking up with a sea view. Hotel Neptun has recently been renovated to ensure an unforgettable stay in the Babin Kuk peninsula overlooking Elaphiti Islands. Choose one of the 91 rooms or suites and make the most of Croatian summer.

These stylish apartments scattered around the Old Town and priced very reasonably, won’t break your budget. Light, airy, with a plenty of sunshine, you will be close to all the hot sports, restaurants and bars.

Set in luxuriant gardens, this family-friendly all-inclusive resort on the Babin Kuk peninsula is only a few minutes’ walk from the pebbly beach. Many of the modern light-filled rooms come with sea views and balconies, and there’s a separate children’s pool as well as a large outdoor pool.

With only eight rooms, this smartly decorated boutique hotel in the Old Town offers a more intimate experience than the huge Lapad resorts. The tastefully furnished rooms don’t have views to speak of, but the fifth-floor terrace has a superb rooftop restaurant and is a great place for breakfast.

A wallet-friendly option offering a selection of dorms and private rooms, the Old Town Hostel has a great Old Town location. It offers extras such as free Wi-Fi and free breakfast and its owner Mike is a well-liked character.