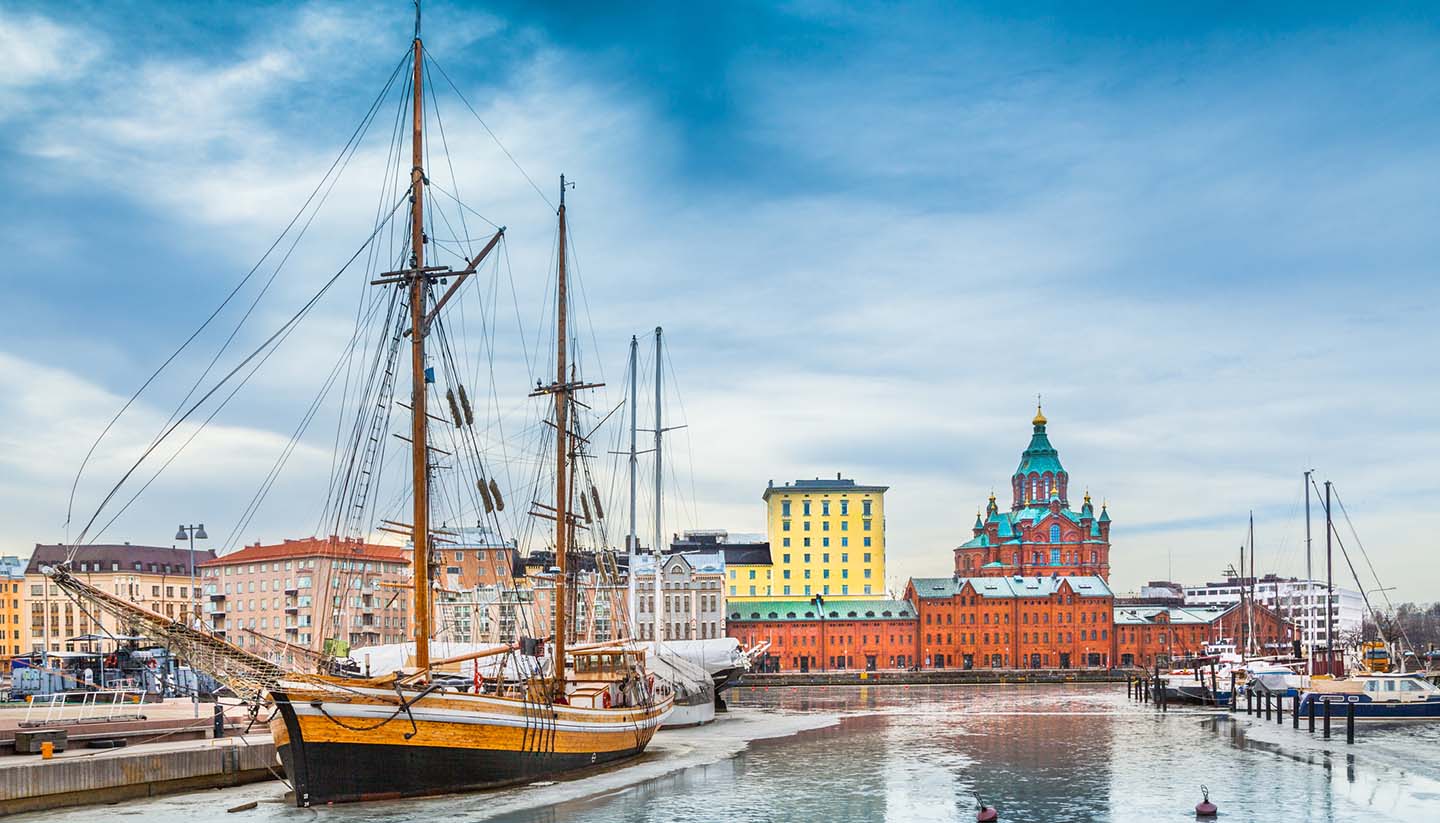 the IDs1541Helsinki-Vantaa Airport
Places in Helsinki

Stylish without being self-conscious and home to an eclectic mix of Scandinavian, Russian and Sami culture, loveable Helsinki is an accurate reflection of Finland itself.

Looking across the Gulf of Finland towards Estonia, the Finnish capital has always been a sea town and its harbour remains at its heart.

Helsinki has a character that perfectly reflects its geographical location - on the historical fault-line between the Swedish and Russian empires. Although the city is unmistakably Scandinavian, the architecture and the locals’ penchant for vodka show the clear influence of mother Russia.

Outweighing both, however, is the influence of the sea and the maritime history that comes with it. Unusually for a city of its size, Helsinki boasts 315 islands and close to 100km (60 miles) of coastline.

Many of the city’s main attractions are found by the water, from the UNESCO-listed Suomenlinna sea fortress to the gorgeous beaches of Pihlajasaari and Uunisaari islands. Helsinki’s seafood restaurants that are second to none too – try perch, whitefish, pike-perch or salmon served with new potatoes in summertime, while the legendary crayfish season starts in August.

The changing seasons, in particular the long dark days of winter, have also influenced the character of the city, not least in the cosy bars and restaurants that come into their own when it snows.

By contrast, the long sunny days of the summer months let you appreciate the unironically named Winter Garden, wander along Ruoholahti canal or dive into the Kumpula Outdoor Swimming Pool. Whatever the season, don’t miss a trip to the Kotiharju sauna, the oldest public wood sauna in the city.

There’s always plenty to do outside too, with fishing, cycling, golfing or a visit to the Finnish Nature Centre in nearby Nuuksio National Park among the summer highlights. In winter, try ice skating, skiing and snowboarding or go cross-country skiing on one of the city’s dedicated trails. It might be a bit dark in winter but Helsinki really is a year-round city.

The 349-room Crowne Plaza benefits from an excellent location opposite the Finnish National Opera on Mannerheimintie close to most of the attractions in Helsinki. The hotel offers wireless internet access in all areas. Creature comforts include saunas a spa and pool and a restaurant and bar.

The thoroughly modern Holiday Inn in Helsinki benefits from an excellent location in the centre of Helsinki, next to the train station, the terminus for buses from the airport and the new music centre. There are 174 rooms and suites with modern amenities, plus a restaurant and lobby bar. There's also a gym and a kids play area.

Just north of the centre, in the Hakaniemi district, the Hilton Helsinki Strand makes the most of the water views from its rooms, restaurant and rooftop sauna, pool and gym complex. The 192 rooms have every convenience, including wireless internet access, and the Helsinki hotel offers excellent services for families, including a babysitting service. The hotel is less than a mile from shops and entertainment areas in the city.

Founded in 1887, the Hotel Kämp has attracted high fliers for more than a century, and its public areas swim with period charm. Restored throughout, the Helsinki hotel offers 179 spacious rooms with luxurious amenities and high-quality dining at the elegant Kämp Café Brasserie & Bar and Yume, which serves innovative Japanese/Scandinavian fusion cuisine. Other facilities include a gym, spa, sauna suite and a stylish bar and nightclub. The hotel has five meeting and conference rooms, plus the flamboyant Mirror Room, with banqueting space for 120.

Housed in a building designed by architect Wivi Lönn in 1928 and furnished with furniture designed by Alvar Alto, this inexpensive and comfortable Helsinki hotel also scores points for its convenient location, just west of the centre. Refurbished throughout in 2006, Hotel Helka has 150 rooms, sauna facilities, a restaurant and bar. Limited parking spaces are available.

Offering reasonably priced accommodation in the heart of Helsinki, Hotel Arthur is just a stone's throw from the railway station, the Kauppatori fish market, Esplanad Park and big department stores. There are 182 comfortable and well-appointed rooms with en-suite facilities, plus a large restaurant, a lobby bar and banqueting and conference facilities. Around 18 of its rooms are decorated in an art nouveau style following a refurb in 2012 to coincide with the city being awarded World Design Capital of the Year.