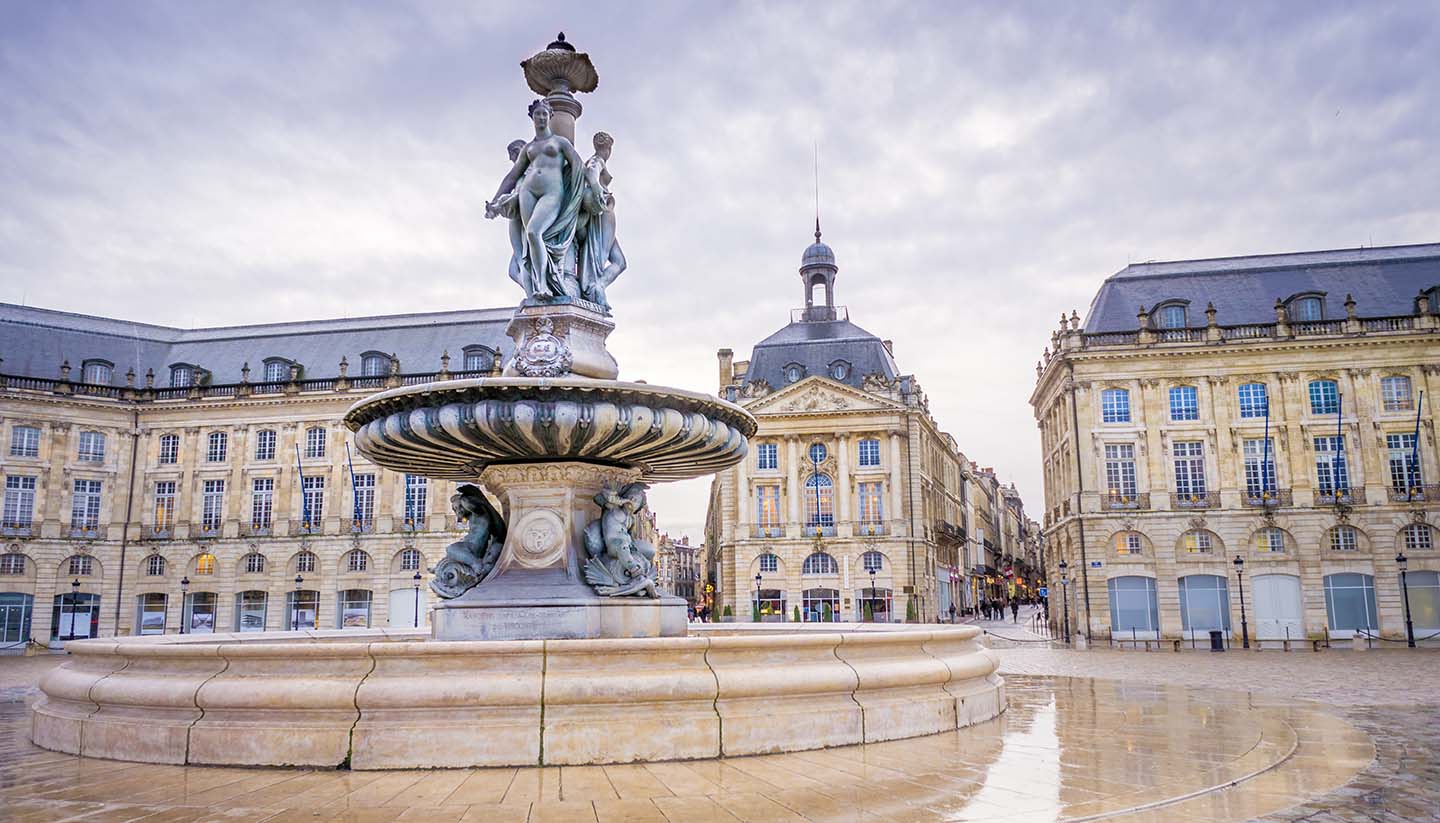 the IDs1491Bordeaux Airport
Places in Bordeaux

A port city straddling the sleepy Garonne River, Bordeaux was once known as La Belle au Bois Dormant ('the Sleeping Beauty'), but following more than two decades of renovation, she has woken up revitalised.

At its heart is the UNESCO-listed city centre, which has romantic parks, landscaped quaysides and 18th-century warehouses that now brim with chic bars and restaurants. Indeed, so complete was the makeover from tired backwater to glamorous modern city that the Queen concluded that Bordeaux was "the very essence of elegance" following a visit.

Dotted with shops and restaurants, and overshadowed by the mighty Palais de la Bourse, the Garonne riverfront is another spot not to be missed – especially with the shimmering Miroir d'Eau water mirror that reflects the elegant palace.

The riverfront has been transformed into one long pleasure park, with a wide quayside that's perfect for strolling, jogging and cycling. It's also a new shopping magnet, thanks to the shops that mingle with the riverfront cafés along the Quai des Marques. Just beyond is the rejuvenated Bassins à Flot, a formerly run-down warehouse area that's now home to the sparkling Cité du Vin.

It might be famous for its vino but a brief fling with this French femme fatale is all you need to tell you that there's more to Bordeaux than booze.

There's a pleasing mix of traditional and modern in this stylish hotel, where streamlined rooms are enlivened by marble fireplaces and ornate gilt-framed mirrors. Housed in a handsome 18th-century townhouse, the hotel is in a prime location a few steps away from the Golden Triangle.

As trendy as its name suggests, and housed in a striking white building, this boutique hotel on Bordeaux's riverside offers 45 open-plan suites with swanky modern furniture. Floor-to-ceiling windows give fantastic views of the river, and some rooms have round beds straight out of a 1960s film.

This new addition to Bordeaux's roster of five-star hotels is a riot of innovative design – but done very discreetly so that comfort isn't sacrificed on the altar of style. It's in a classy 18th-century townhouse close to the Golden Triangle, and the courtyard garden is a tranquil place for breakfast.

Set in an elegant 18th-century townhouse this classic hotel is in a pedestrianised street in the centre of Bordeaux. It offers a selection of spacious and comfortable rooms at good value for the location and the family room has its own terrace. Breakfast is included in the price.

Philippe Starck's budget hotels are packed full of style, and his Bordeaux outpost is no exception. Airy rooms include iMac TVs and free Wi-Fi, and the downstairs bar and restaurant are seriously funky. The star feature is the rooftop restaurant with great city views.

You can't beat the location of this sophisticated hotel in an 18th-century townhouse just off the Golden Triangle. Individually designed rooms combine innovative decor with traditional touches. As a bonus, the hotel has one of the most sought-after wine bars in the city, with delicious tapas served in the courtyard garden.