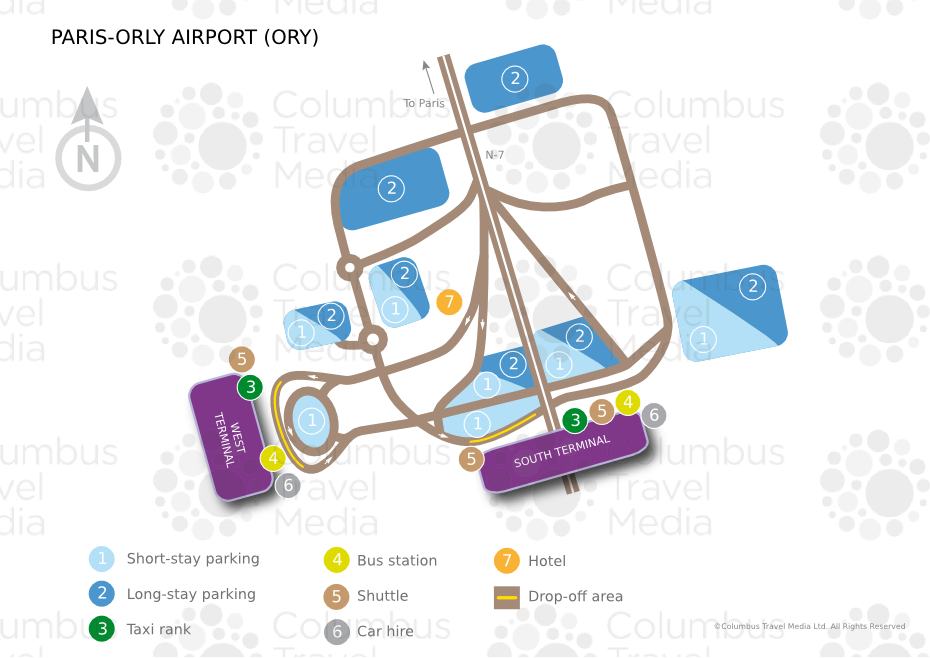 The smaller of two major international airports serving the French capital, Paris-Orly Airport is a short distance to the south of the city. Our Paris-Orly Airport guide is a useful resource for passengers visiting the airport, with information regarding terminal facilities, public transport access and nearby accommodation options.

From Paris, take the E15 ring road that skirts the city southbound and turn on to the southbound A6 via Porte d'Orléans or Porte de Gentilly. From here, merge onto the A106, which leads to the airport. The total drive time to the airport from central Paris is approximately 30 minutes.

Free shuttle buses run between the two terminals and the car parks.

Tram: The T7 tram runs between the airport and Villejuif-Louis Aragon, which is connected to the subway. Trams run every six minutes during peak hours and the journey takes approximately 35 minutes. Single tickets cost €1.80.

Taxi: There are plenty of taxis connecting Paris-Orly Airport to central Paris and suburban destinations from outside the arrivals area. Fares range from €40 to €50 to the city centre and the journey times vary according to the destination and traffic conditions.

There is a HSBC Bank branch in Orly West terminal. Both terminals have ATMs. Bureaux de change facilities are located in Orly South terminal.

There are numerous cafés, snack bars and restaurants at Paris-Orly Airport. These include an American style lounge bar in Orly West terminal, and a mixed cuisine restaurant in Orly South terminal.

Paris-Orly Airport boasts a variety of shops, ranging from newspaper stands and gift retailers to jewellery shops and fashion boutiques. Duty-free outlets in both terminals sell a range of perfumes, tobacco, confectionary and alcohol.

Lost and found offices in Orly South (Gate G) and Orly West (Gate I) can assist with missing item queries. There is also a dedicated online database where details of items found in the terminals are available, as well as a section to report missing or found items (http://aeroportsdeparis-orly.franceobjetstrouves.fr/en).

Other facilities at Paris-Orly Airport include medical centres, art galleries and chapels in both terminals. Children's play areas, video gaming facilities and massage chairs are provided at various points in the departure areas.

There is a fully equipped business centre, the Centre Affaires, at Orly South terminal with telephone, photocopying, fax and video facilities as well as meeting space that can accommodate up to 190 delegates. Meeting rooms are also provided at some nearby hotels, including the Hilton Paris Orly (tel: +33 1 4512 4512; www3.hilton.com).

Free Wi-Fi internet access is available throughout Paris-Orly Airport. Additionally, there are post offices in the public areas of both terminals.

Paris-Orly Airport is fully accessible to disabled passengers with specialised welcome desks at Orly West exit W on the first floor, and at Orly South exit E on the ground floor, lowered ATMs and public phones, and adapted toilets. Disabled parking spaces are located in all airport car parks. The shuttle buses at the airport can accommodate wheelchair users. Any passengers who may require additional assistance are advised to contact their airline before travelling.

Orly West and Orly South terminals both have short-term car parks directly opposite the terminal buildings, which are directly linked to the terminal either by lift or travelator. Long-term and economy car parks also serve both terminals, and are linked by a free shuttle bus service.