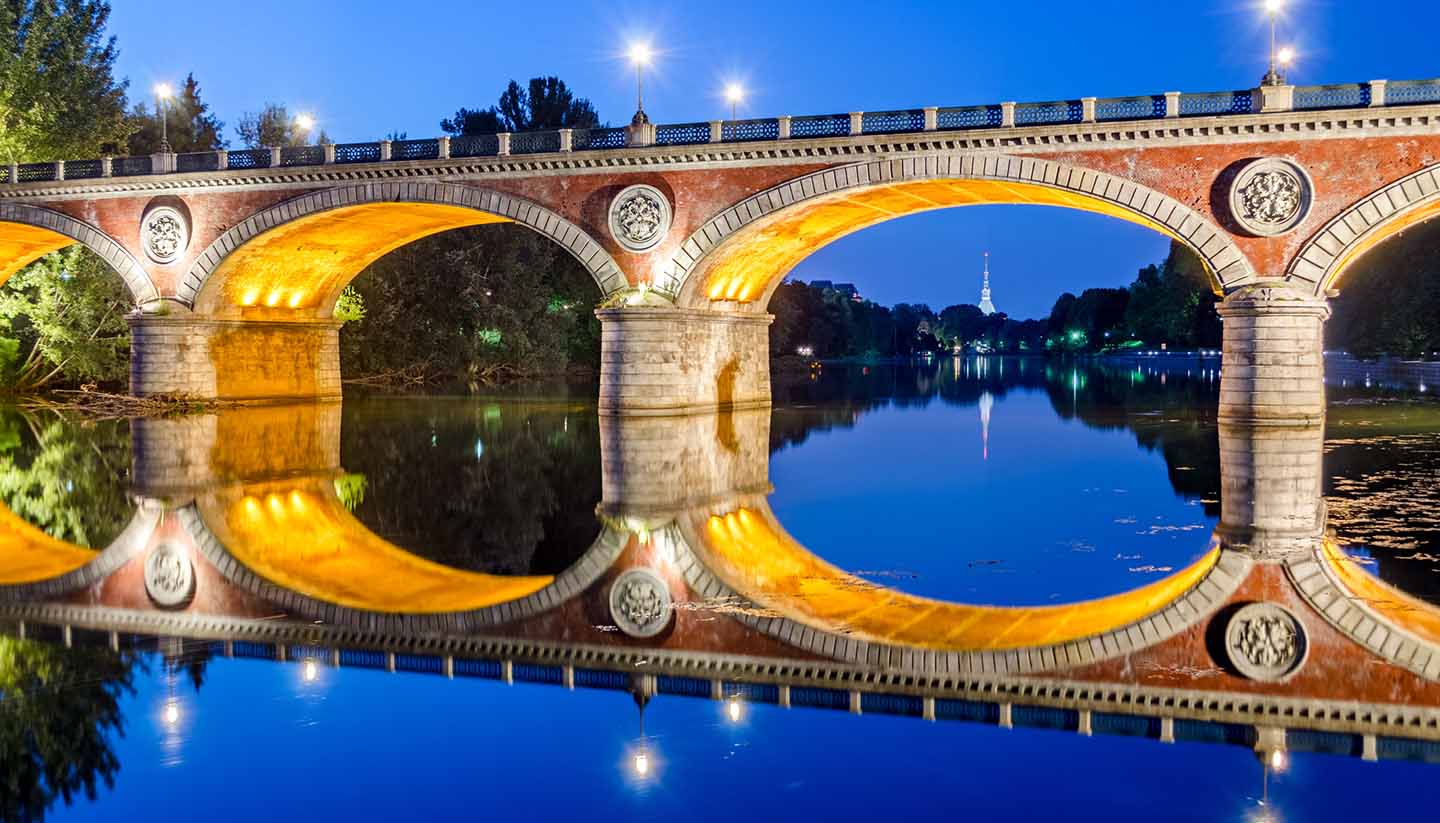 Situated on the mighty Po river in the far northwest of Italy, and surrounded by stunning alpine scenery, Turin offers visitors a feast of baroque architecture, ornate art nouveau cafés and museum collections covering everything from Egyptology to contemporary art.

Once little more than an industrial city, recent urban regeneration has transformed Turin into one of Italy’s more interesting outposts.

Start at its recently been renovated museums: the Museo Nazionale del Risorgimento Italiano, which looks at the establishment of the Italian state in 19th century, and Museo Nazionale dell’Automobile, celebrating the mighty car-production industry that once thrived here.

The symbol of Turin is the Mole Antonelliana, whose needle-like spire bursts unmistakably from the city skyline. Completed in the late 19th century, it today houses the Museo Nazionale del Cinema, but was originally conceived as a synagogue. There’s also one of the country’s most famous relics here, the Holy Shroud, said to be a section of the cloth that wrapped Christ's body after the crucifixion. It still attracts thousands of pilgrims.

Turin is also great for drinking – there are many café-bars in and around the city centre, so don’t forget to have a glass or two of Vermouth, which was born here. You’ll also find that Turin has a long history in chocolate and several old, traditional chocolatiers can still be found under the city’s handsome grey porticoes; be sure to scoff a few squares of Gianduja, the hazelnut chocolate created here under Napoleon.

As for savoury food, Piedmont’s cuisine is very different from the rest of the country, and some of the region’s best restaurants can be found in Turin. Rich sauces give way to light risottos, gamey meats and plenty of truffles. But as the Piedmontese were instrumental in unifying the country, don’t dare think of it as anything other than Italy.

This 4-star hotel in the centre of the city has been around since 1925. It has plush, soundproofed rooms and regularly plays host to visiting film and sporting stars. The Carignano Restaurant serves a Piedmont tasting menu, so guests can familiarise themselves with the local specialities.

In the heart of the historic centre, just behind the Piazza Castello, this boutique hotel occupies a renovated historic building and has 48 comfortable rooms. It also has tea and coffee making facilities in the rooms (a rarity in Italy) alongside free Wi-Fi and upmarket toiletries.

This friendly bed and breakfast has clean bright rooms and is furnished with contemporary fabrics and modern bathrooms - some with spa baths. Book a room with a balcony to enjoy views of Turin's street life and the mountains beyond. There is a bus and tram stop just outside the hotel for onward travel across the city.

Situated alongside the antique booksellers and record dealers of Via Po, staying at this classic pensione (guest house) is like stepping back in time. Rooms are simple, but clean, with elegant parquet floors. Wi-Fi and breakfast are included in the hotel's very reasonable room rates.

Nab yourself a top floor room of this elegant, centrally positioned hotel as most come with stylish roof terraces that afford distant views of the Alps. This welcoming 4-star stay comes with the added bonus of a peaceful spa complete with swimming pool, sauna and Jacuzzi. Breakfast is an exquisite spread and afternoon tea is also worth your time.

This 4-star hotel in the enormous former Fiat factory is situated next to the conference centre and 8Gallery, Turin's main shopping mall. All rooms have vast windows and high ceilings and are furnished with sleek modern furniture.