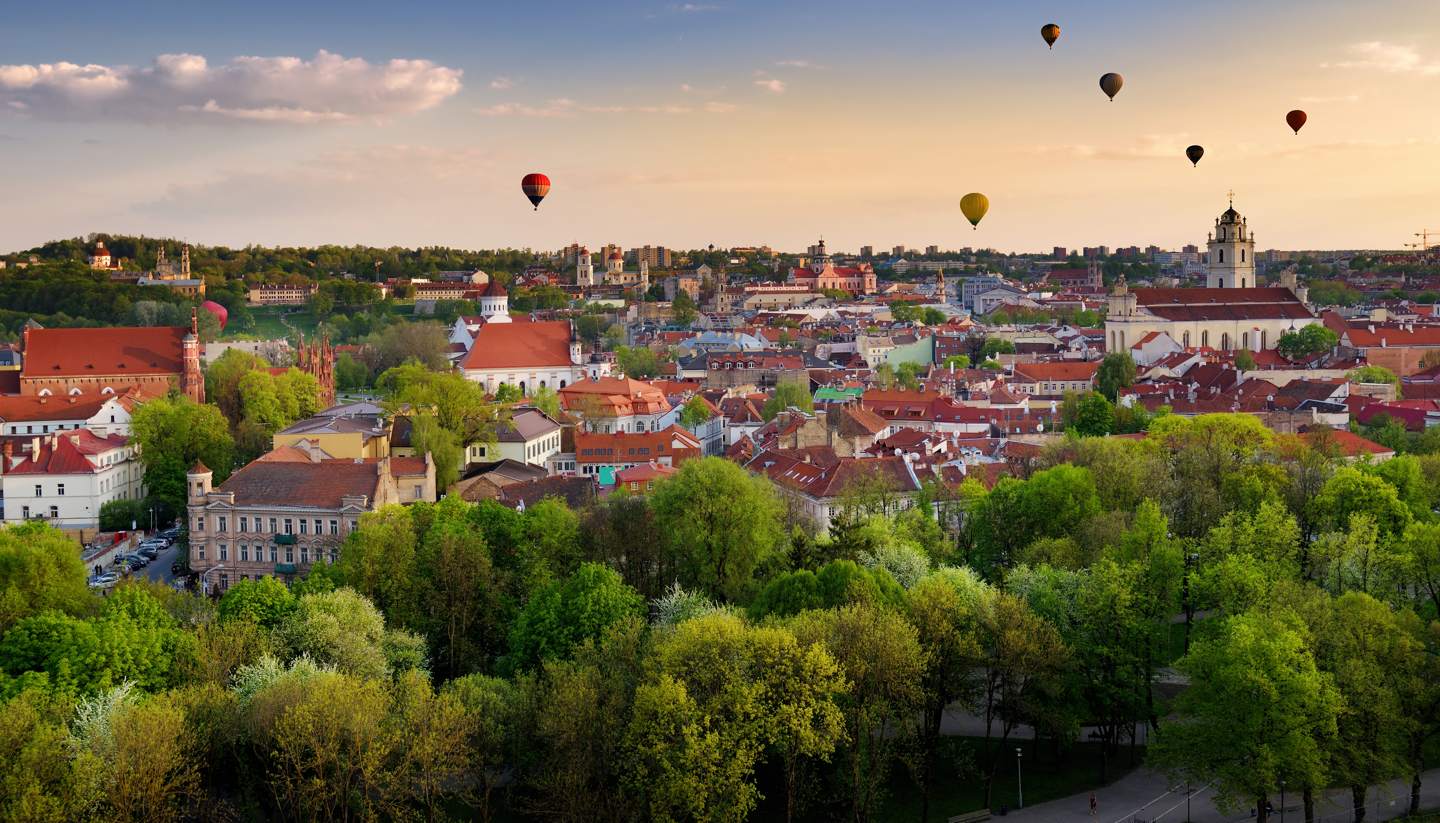 the IDs1510Vilnius Airport
Places in Vilnius

According to Lithuanian folklore, Vilnius was built upon a dream. After hunting in the forests in the Šventaragis Valley in the early 14th century, the Grand Duke of Lithuania, Gediminas, had fallen asleep.

He dreamt of a large iron wolf atop a hill, howling as loud as a pack of 100 wolves. When he woke, he asked the priest Lizdeika to interpret his dream. He was told to build a city here as the iron wolf represented the fame of the future city spreading far and wide.

In 1323, Gediminas erected a wooden castle on top of a nearby hill, and named the city below Vilnius, after the nearby Vilnia River.

Gediminas sent news of the city to various towns across Europe, inviting the Jews and Germans from the Hanseatic League to visit. By the end of the 14th century, a German medieval military order called the Teutonic Knights had all but destroyed the city and castle. The knights were finally defeated in July, 1410 at the Battle of Grunwald, one of the largest battles in medieval Europe.

Vilnius was then rebuilt with huge city walls, allowing it to grow in stature, size and influence. No invitations were dispatched ahead of the Russians taking the city in 1655, nor before the Swedish occupied it in both 1702 and 1706.

After the Third Partition of Polish-Lithuanian Commonwealth in 1795, Vilnius was annexed by the Russian Empire. The 120-year Russian occupation was interrupted when the French, led by Napoleon, stormed the city in 1812. The French did not enjoy much success, however, as 40,000 soldiers died here due to cold and starvation.

The next invasion came in 1915 when German occupied Vilnius during World War I, and again in 1941 during World War II. When the German withdrew in 1944, the Soviets took back control once again. It was only after the Soviet coup attempt of 1991, the Soviet Union finally acknowledged the independence of Lithuania.

• Lithuania was the last pagan country in Europe, accepting Christianity only in 1387.
• Vilnius was once known as the 'Jerusalem of the North', but the Nazis slaughtered most of the Jewish population during WWII.
• Founded in 1579, Vilnius University is the oldest university in the Baltic states.
• Vilnius was a European Capital of Culture in 2009.

Set right in the heart of Old Town, Conti offers spacious rooms with satellite TV channels and free Wi-Fi. Facilities include a gym and a sauna.

A glitzy international hotel located in the Old Town. Its 96 rooms and suites are elegantly decorated and many of them offer excellent views of the UNESCO-listed Cathedral Square. After a day of sightseeing, guests can unwind at the spa centre.

With 200 funky music-themed rooms, this modern hotel has a gym and offers complimentary breakfast. There is no "Concierge Service" but there are Mac computers in the lobby readily available to help.

This Vilnius hotel has 166 rooms over four floors and offers guests free buffet breakfast and Wi-Fi. It is located in the centre of Vilnius on the north bank of the Neris River a 10-minute walk from the Old Town.

This quaint Vilnius boutique hotel is at the heart of the Old Town with a welcoming, homely ambience, and a sense of tradition that is backed up by free Wi-Fi and flat-screen TVs. Breakfast is free.

Nestled in a century-old building, this hotel has 126 spacious rooms equipped with Wi-Fi and Nespresso coffee machine. There's also a classic French restaurant, a cocktail bar, a gym and an indoor pool. It's a five-minute walk to the Gates of Dawn.