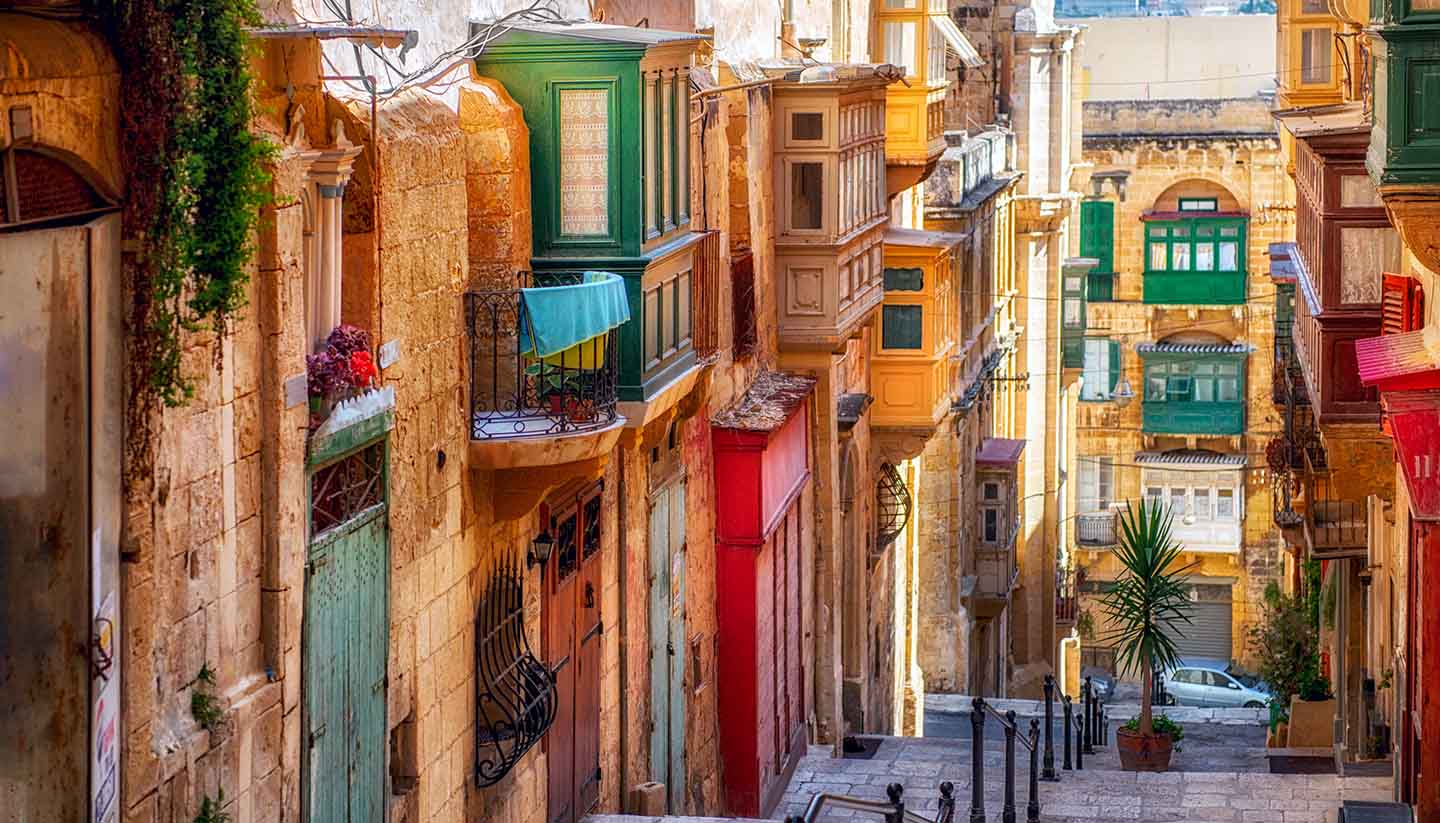 Set at the crossroads of the Mediterranean, Valletta is one of Europe’s great architectural showpieces. It’s often described as an open-air museum, and after 7,000 years of history, it still stands as one of the world’s best preserved fortified cities.

Here, in the UNESCO-listed city, shaded alleyways link grand squares with glorious palazzi, which sit alongside shop facades barely changed in centuries. The city was originally established for military and strategic reasons, but was later embellished into a fine showcase of baroque decorative art – the magnificent interiors of St John’s Co-Cathedral are an excellent example. It’s little wonder that the city becomes the European Capital of Culture in 2018.

And because it occupies a promontory (albeit one circled by mighty bastions) it grants magnificent sea views from practically everywhere. You'll need good walking shoes to explore properly, as there are hundreds of steps and the only real way to get around Valletta is on foot. Stroll up to the Upper Barrakka Gardens for harbour panoramas or take advantage of the new lift, which connects the gardens to the wharf.

As cities go, Valletta is tiny. It measures less than 1 sq km (0.4 sq miles) and you can walk across its widest point in less than 20 minutes. In contrast, however, its spectacular Grand Harbour is the biggest in the Mediterranean. Through the ages, those sailing in have included Napoleon Bonaparte, the British and the Knights of St John whose legacy is visible throughout the city.

Today, historical warehouses still mark the spot where the Knights of St John and European merchants used to unload their wares. The waterfront itself has been revitalised into a vibrant spread of shops, bars and restaurants – it’s particularly romantic at night, when illuminated.

Apart from a sweeping history, there’s also plenty in the way of modern attractions, and Valletta’s new cafés, bars and restaurants have helped refresh its previous image as a staid sun spot. Some great boutique hotels and self-catering accommodation options have also helped attract a more sophisticated crowd, and there are tonnes of outdoor pursuits to enjoy, from sailing to cycling.

Originally built as a home for the influential De Robertis family at the turn of the 16th century, Captain Giacomo De Robertis, a Bolognese, then passed the building on to the Testaferrata family and later to the Marquis Cassar Desain. The building is now a hotel with a sitting room, reading lounges on all floors and a coffee shop which formerly housed the stables. There are also two restaurants, serving local and global cuisine.

This eccentrically-designed self catering luxury town house is situated in the old part of Valletta and dates back to the Knights of Malta. The house offers a large, air-conditioned bedroom with ensuite facilities, living room and separate kitchen. The decor is a mix of Maltese-style baroque and bespoke designer furniture. This is not your standard accommodation but it's memorable and suitably romantic.

Bright, colourful and hipster-cool, this hostel in the heart of St Julian also offers bike hire, free Wi-Fi, and the views from its roof top terraces are glorious.

A huge palm-filled atrium, a grand piano in the lounge, a platoon of flunkies, a choice of five excellent restaurants, three bars and 410 bedrooms with every comfort known to man - Brad Pitt liked it so much he offered to buy it, just so that he could extend the bar hours. Located in the prestigious Portomaso waterfront in buzzing st Julian's, this is the place to stay if you want to be close to the heart of the action.

This 4-star hotel is delightful. The rooms are modern and clean and the service is excellent. The onsite restaurant L’Artiglio serves up superb seasonal dishes. Triq Ir-Repubblika (Republic Street) is just a short walk away and so are attractions like the National Museum of Archaeology.