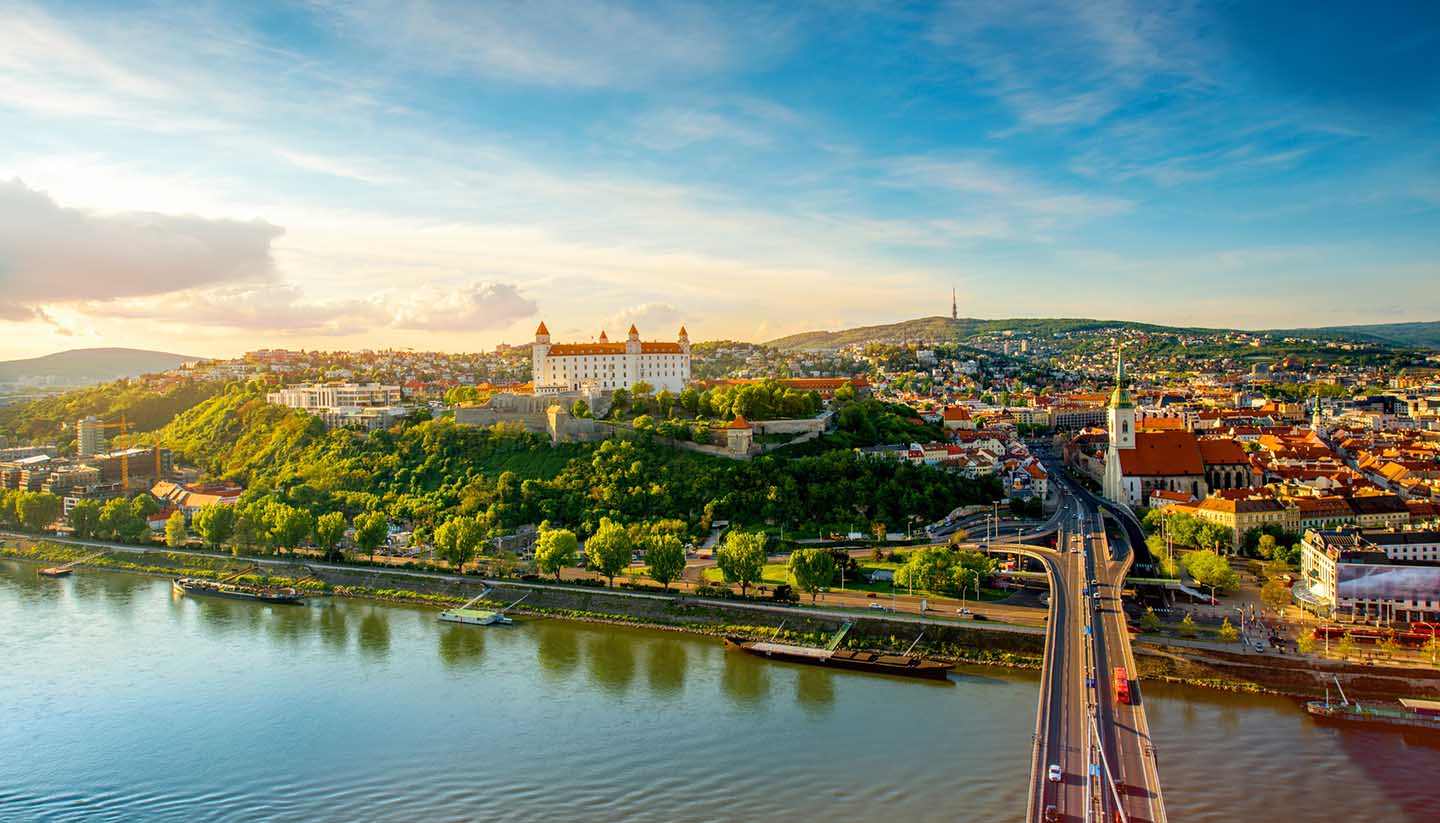 Bratislava is an old European city full of character, with a beautifully restored historic quarter, a setting on the Danube and a liking for a good night out.

Just an hour by train from Vienna, it’s been home to Celts, Romans, Germans, Hungarians, Jews, and of course Slovaks - and like all cities of cultural confluence, it shows diversity in everything from its architecture to its cuisine.

There’s much to love here and Bratislava’s many charms have more than offset its communist legacy. Here you’ll find the greatest concentration of high-quality restaurants in Slovakia, while the narrow pedestrianised streets of the Old Town lead you past cosy cafés, late-night bars and relaxed pubs, not to mention some eye-catching outdoor sculptures.

Museums, galleries and a whole slew of festivals and events further enhance the city’s colours, but when you’ve had your fill of exploring the city itself, it’s easy to escape from the hustle and bustle. Many walk, cycle or picnic in the forested hills that surround Bratislava – or discover some of the many vineyards and castles in the surrounding region.

Five bridges connect the two halves of the city across the Danube, but the sites of interest to visitors are almost all north of the river, in the cobbled streets and attractive squares of the Old Town. It’s a city with a pleasantly relaxed feel and with fewer than half a million inhabitants, it’s never really going to feel overcrowded.

The white walls of Bratislava Castle draw the eye, although the views granted from the castle’s hilltop are just as impressive – you’ll see the medieval roofs of the Old Town below, as well as ranks of socialist-era tower blocks on the other side of the river. This is a city with more than one face, and that’s part of its appeal.

This is a basic but cheap and clean hostel on the edge of the old town. The single, double, triple and quad rooms each have their own ensuite bathrooms, and there’s free internet access at reception. Other amenities include a summer terrace and secure bicycle parking.

This 162-room hotel on the edge of the Old Town has excellent business and conference facilities as well as very comfortable and elegant rooms for leisure travellers, as well as a gym and sauna. The staff are friendly and helpful.

Set in a beautifully restored old building on the Old Town's attractive main promenade, this luxury, 170-room establishment was built in 1837 and boasts a superb Danube view from the seventh-floor terrace, as well as an acclaimed restaurant and a casino. There's a leafy summer terrace, a plush Mirror Bar, an upmarket restaurant (the Savoy), and the buffet breakfasts are legendary.

This attractive Hollywood-themed hotel, a 5-minute walk north of the Old Town, offers 13 rooms each dedicated to a different film star. It also boasts a pleasant café, cocktail bar and restaurant.

This modern 120-room hotel is close to the Old Town and the business district. Its sound-proof rooms with internet and an international on-site restaurant and bar run with the business clientele in mind.

The smart Mercure is conveniently located near the main railway station, and just a 15-minute walk from the old town. The comfortable rooms are dark-furnished but spacious, with gleaming, semi-transparent bathrooms. The hotel has its own bar and upmarket restaurant, as well as the requisite fitness centre. Impeccable service.