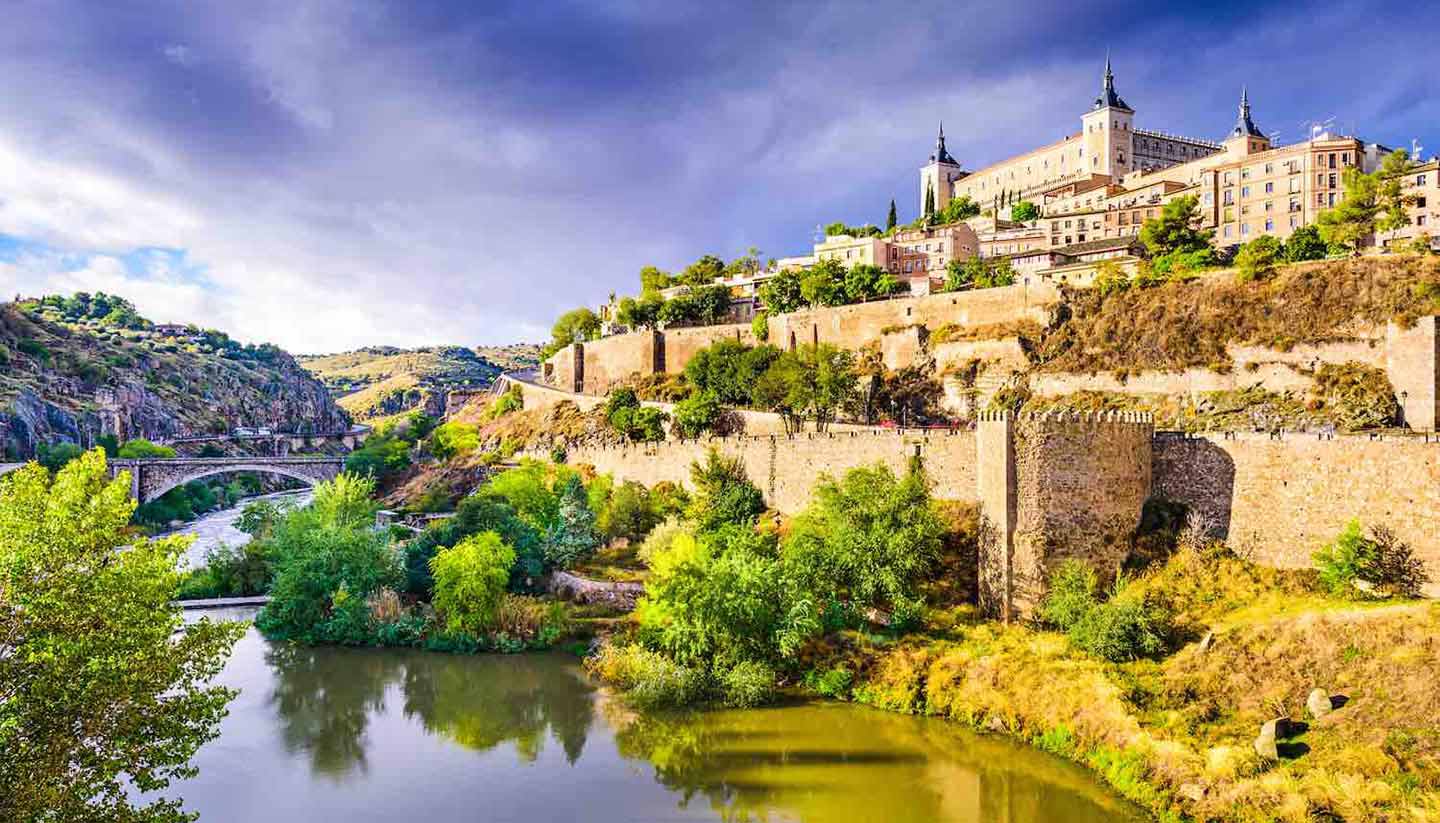 With much of its city wall and many of its powerful gates still intact, Toledo has changed little in appearance since El Greco painted its higgledy-piggledy skyline four centuries ago.

Surrounded on three sides by the moat-like River Tagus (Rio Tajo), the medieval old town, a UNESCO World Heritage site, perches on a small hill, and is one of Spain's most photographed and visited places. To get a great overview of its spectacular setting, it's worth heading first to the Mirador del Valle, just south of town and the river, from where there are wonderful panoramic views. Then take your time exploring the narrow alleyways.

Within the old city walls you'll find several grand buildings dominating the skyline. There's the gothic-Flemish 15th-century Franciscan Monastery of San Juan de los Reyes, with its ornate double-levelled cloisters, and Toledo Cathedral, the construction of which began in the 13th century. But the most striking building of all is the hulking rectangular mass of the Alcázar. Built on a site that was first fortified during the Roman era, it was converted into a palace by Emperor Carlos V.

All around these magnificent buildings, the streets are filled with trinket-stuffed shops, which are good places to look for the famous Toledan steel. Once considered the finest and deadliest weaponry in the world, wielded by Spanish heroes from El Cid to the Conquistadores, today it is more likely to be manufactured under Hollywood licence as the 'official' arms of countless swashbuckling blockbuster movies.

Despite the crowds, there are more than enough sights to accommodate all-comers and the labyrinthine streets mean that you can easily get off the beaten track in no time at all. If you can, stay overnight, when the city empties of day trippers and reverts to its quiet medieval atmosphere.

Set in the very heart of Toledo, this basic hotel offers great value, with all rooms having their own shower and air conditioning plus a good-size roof top solarium (sunbathing area) with loungers looking onto the Toledan skyline.

It's not exactly luxurious, but you'll be hard pushed to find a better value-for-money bed for the night in Toledo. What's more, it's set in a handsome historic building right next to the hulking medieval gateway Puerta de Bisagra, while the lady who runs the place is an expert on what to see and do in Toledo – and she likes to talk.

If you have your own transport and fancy escaping the hustle and bustle of the admittedly tiny Toledo, Parador Conde de Orgaz just outside the city is a clear winner. Set in a stone building typical of the region, the property enjoys incredible views of Toledo below. The grounds are wonderful for a stroll.

With extensive grounds, handsome rooms, fantastic views and a design that mixes the modern with the rustic, El Refugio de Cristal is one of the best casa rurals (rural houses) in the area. It's a bit of a way out of the city, which partly explains the modest price tag, but definitely worth seeking out if you want to combine a city break with a rustic retreat.

For a bit of old-time glamour, look no further than Carlos V – the likes of Rita Hayworth and John Wayne once stayed in this handsome property. Today the hotel prides itself on offering affordable accommodation in the heart of the city, with great views from its outdoor terrace, while the dining room, whose sweeping arches bear Arabic script, is a must-see.

This charming and characterful 17th-century former bakery set around a courtyard and boasting light fresh modern colourful bedrooms enjoys a peaceful location in the Jewish Quarter of Toledo. It's named after the city's favourite painter, El Greco, whose museum is right next door.