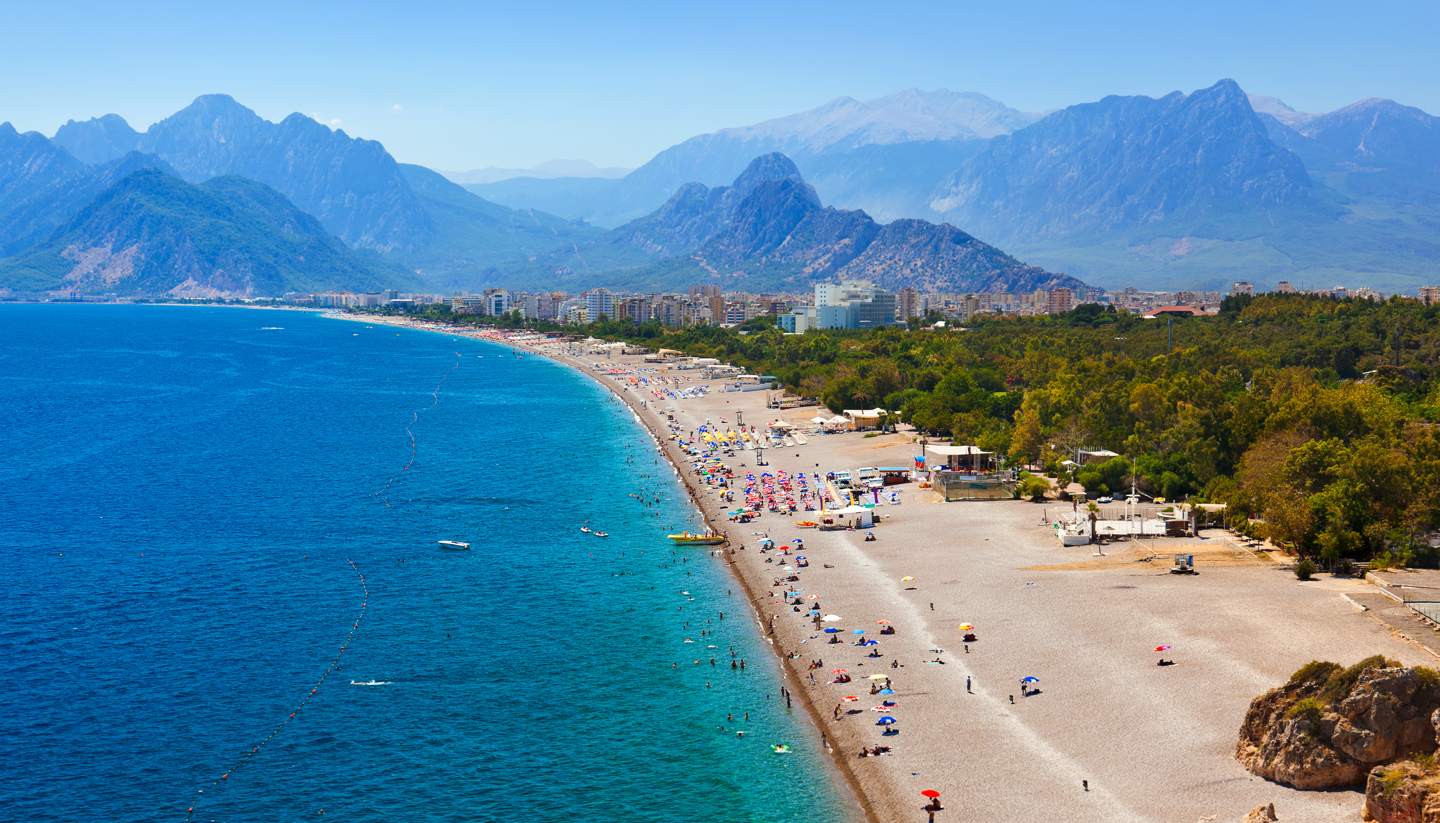 Founded as a port by King Attalus of Pergamon in 158BC, Antalya has been owned by the Romans, Byzantines, Crusaders, Selçuk Turks, Ottomans and even briefly by the Italians. The fourth largest city in Turkey, much of it is a typical urban sprawl, but the old centre, Kaleiçi, is an utterly delightful maze of steep narrow streets lined with carpet shops and boutique hotels in restored Ottoman houses, curving down to the ancient harbour, while the Konyaalti seafront is a wonderful place to take the evening air.

Konyaalti Beach, to the west of the old city, is a sweeping shingle beach, more a seafront playground than a bathing beach, with plenty of restaurants and cafés, shops and snack bars - as well as several very glamorous hotels. This is where locals come for their evening stroll, Lara, the main tourist hotel strip on the far side of the town, is actually on the cliff top with artificial bathing platforms built onto the rocks below. To get real sandy beach, you need to head out of town about 11km (7 miles) west to Büyük Calticak and Kuçuk Calticak, while places such as Phaselis, with its magical mix of pine forests, ancient city and golden sand, or Belek's white sand beaches are within easy day-trip distance.

Antalya Museum on Konyaalti is a world-class archaeological collection housing the finest exhibits from classical sites right along the Mediterranean coast, including the ancient city of Perge and Aspendos, with its superb Roman theatre, both easily reached near Antalya airport. In town, most of the other sights are within the old city, Kaleiçi, described by a 17th-century traveller, Evliya Çelebi as being surrounded by a 4.5km (3 mile) wall with 80 towers and 4 gates. Start at the top near the 13th century clock tower and statue of Ataturk and work your way down the hill past the Fluted Minaret and Karatay Medrese to the old harbour, now a ritzy marina with its quay lined by restaurants and cafés. On the cliff at the far side of the harbour, an ancient lighthouse, the Hidirlik Kulesi marks the edge of another historic district with a web of tiny alleys of old wood-framed Ottoman houses, around the triumphant Roman Hadrian's Gate, and the ruined Kesik Minare Camii, a fifth-century Byzantine church later converted to a mosque. The privately owned Suna-Inan Kiraç Institute is an excellent museum of Mediterranean civilisations in a former Greek Orthodox church.

There may not be sandy beaches in town, but there are two great water parks with spectacular slides - Aqualand (near Konyaalti) and Aquapark (Lara), which also has dolphin shows, while the museum has a brilliant children's section if you want to try and cram a little culture into them in passing. There are plenty of boat trips from the harbour.

Perge and Aspendos are must-see bits of the ancient world, while Side, just beyond, is an attractive resort that combines ancient and modern and a great beach. To the west of the city are the ancient cities of Phaselis, which also has lovely sandy beaches and shady pine forest and makes a wonderful place for a picnic and Olympos, with a shingle beach but also the extraordinary Chimaera, a natural phenomenon that belches living flame from the rock. Both are probably easiest to get to by boat, on one of the many trips on offer from the old harbour. Inland the Taurus Mountains offer excellent hiking and the dramatic setting of the ancient city Termessos.