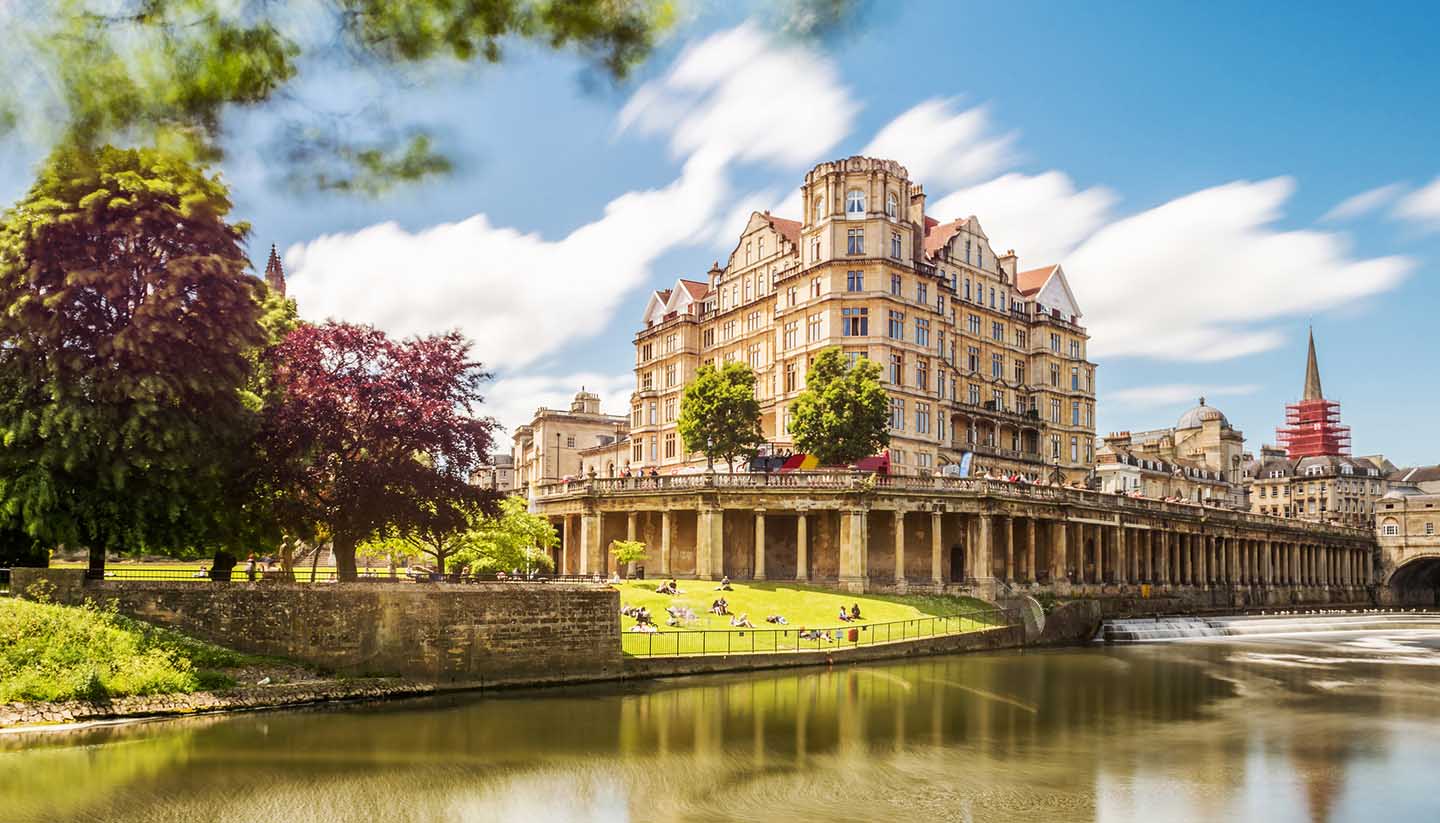 As the legend goes, Bath was founded in 500BC (or possibly much earlier) by Prince Bladud, who cured himself of leprosy in the hot springs and established the city to celebrate the miraculous waters. Whether or not the tale is true, the thermal springs have been prized for their health-promoting qualities for many centuries.

The Romans built a temple to the goddess Minerva and ornate baths here around AD50 and the so-called Aquae Sulis developed into an important recreational town. The Saxons took over Bath in the 6th century and erected an important monastery by the site of the magnificent Bath Abbey, which was rebuilt in the 12th century. Henry VIII’s dissolution of the monasteries saw Bath’s abbey demolished in 1539, and reconstructed again in the 16th century.

By the 17th century, Bath was a quiet market town. Its unique springs were still the main attraction, but after Queen Anne visited in 1692, 1702 and 1703, their popularity grew enormously. The following century, it gained a penchant for the high life, with a boom in well-bred and genteel visitors. There was also a surge in impressive architecture, all built in the honey-coloured Bath stone, a distinct type of limestone.

Famous Bath landmark Pulteney Bridge was completed in 1773, and The Royal Crescent was built between 1767 and 1774. The Grand Pump Room was also built in the late 18th century – a communal place for socialising and sampling the waters. Celebrated English novelist Jane Austen visited Bath around this time, and she went on to live there between 1801 and 1806.

During WWII, Bath was spared German bombing raids until 1942. After a change in tactics, some 20,000 Bath buildings were destroyed and hundreds of lives lost.

In the latter part of the 20th century, coinciding with the restoration of the Roman Baths, the city has boomed as a tourist attraction with over a million visitors a year.

Did you know?
• The first monarch to rule over a united England, King Edgar, was crowned in Bath monastery 973.
• Bath resident, William Herschel, discovered Uranus in 1781.
• Designed by the Scottish architect Robert Adam, Pulteney Bridge was inspired by Ponte Vecchio in Florence.

Housed in a property designed by Brunel, The Royal Hotel has been around since 1846. The present owners took over in 1995 and initiated a refurbishment programme that has transformed the hotel into a modern, attractive and comfortable establishment. The hotel has two bars and a restaurant with steaks as its speciality.

The Queensberry is a boutique town house hotel that is both intimate and stylish. Located in a residential street near the Circus, it is an elegant hotel with many of the original Georgian architectural and decorative features intact. The service is superb, and so is the hotel's Olive Tree restaurant, which offers contemporary British cuisine.

It is hard to beat The Royal Crescent Hotel and Bath House Spa in terms of location, which is situated in the very middle of what is perhaps Europe's most elegant crescent. The hotel occupies two of the Royal Crescent's buildings, both of which were built by John Wood the Younger. The hotel is one of Bath's very best and has beautiful gardens and an excellent restaurant.

The Pulteney Hotel is a large, elegant Victorian house set in its own picturesque south-facing gardens, with fine views of Bath Abbey. There are 17 rooms, all with en-suite facilities, colour television, tea- and coffee-making facilities, hairdryer and central heating. All rooms are tastefully decorated.

15 minutes' drive outside of Bath, 5-star Lucknam Park has established itself as the destination for those seeking a weekend immersion in luxurious hospitality. Set in a 17th-century Palladian mansion marooned in 202 hectares (500 acres) of listed parkland, the hotel boasts a Michelin-starred restaurant, an equestrian centre, and a cookery school.