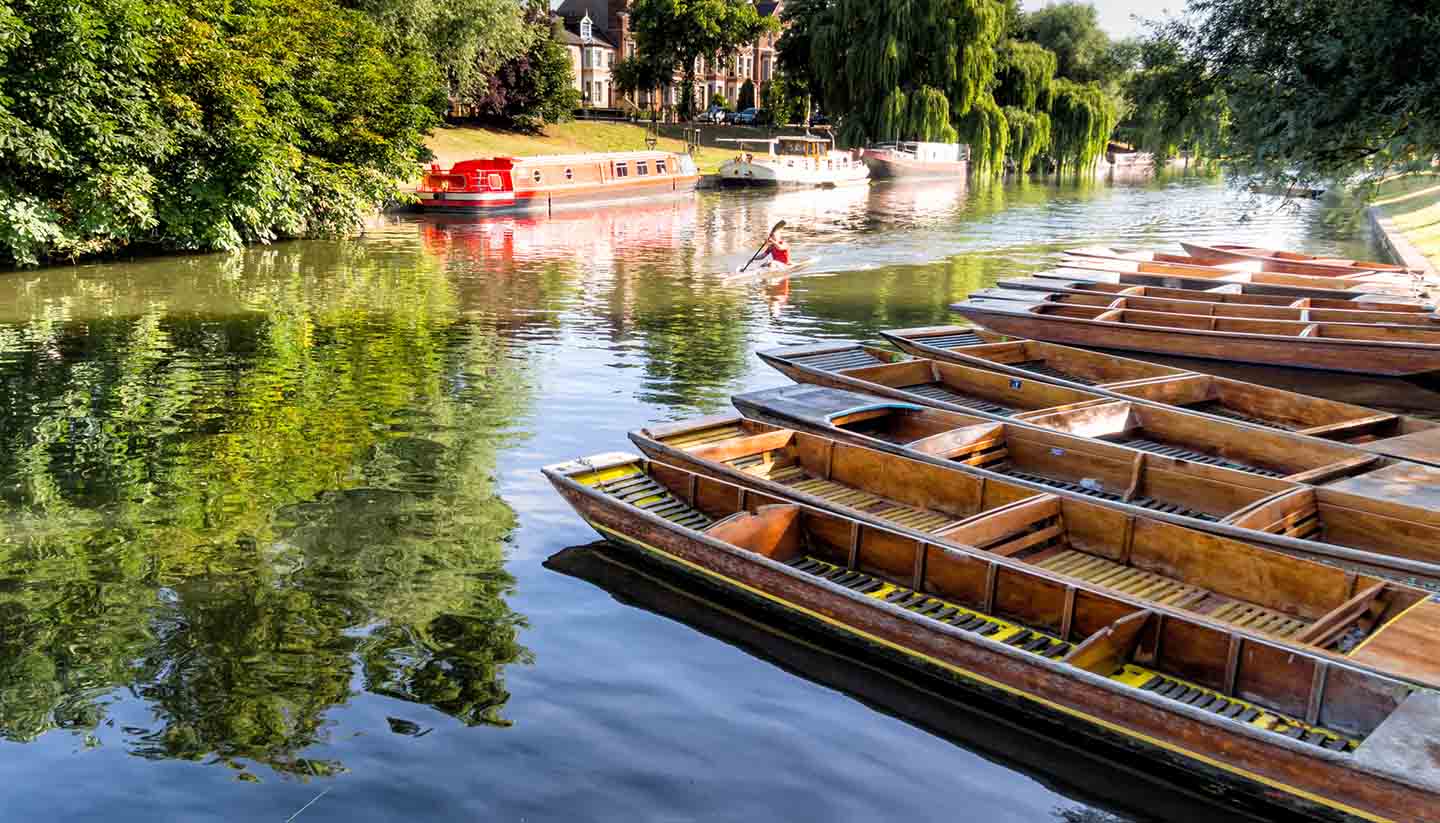 The nearest major airport is London Stansted, 48km (30 miles) south of Cambridge, which has regular bus and train connections to the city. It's also easy to get to Cambridge from London Heathrow and London Gatwick airports.

Airlines offering direct flights to Stansted from other cities within the British Isles include easyJet, Flybe and Ryanair.

The UK has a good, well-maintained road network. Traffic drives on the left, and drivers must be at least 17 years old. Speed limits are 113kph (70mph) on motorways, 97kph (60mph) on single-lane main roads and 48kph (30mph) in built-up areas.

Overseas driving licences and International Driving Permits are valid for up to one year, and insurance is mandatory. Overseas visitors bringing their own cars should bring registration documents and check with their insurance company as to whether a Green Card is needed. The two major motoring organisations, the AA (tel: +44 121 275 3746; www.theaa.com) and the RAC (tel: +44 844 891 3111; www.rac.co.uk), are good sources of information.

Cambridge is easy to reach from the north and south of the country. The M11 motorway, which sweeps to the west of the city, enables easy access from the south. From the north, the A1 and M1 motorways link to the A14 dual carriageway straight to the city, and the A14 is the route to take from the east and west.

National Express (tel: +44 871 781 8181; www.nationalexpress.com) operates regular coach services connecting Cambridge with various destinations in the UK, including Victoria Coach Station in London. The bus station is located in the centre of the city on Drummer Street.

Cambridge railway station is located on Station Road, southwest of the city centre. Cambridge is well connected to the rest of the UK via regular train services.

Great Northern (tel: +44 345 026 4700; www.thameslinkrailway.com) operates services between Cambridge and London's King's Cross station, which take about 50 minutes. Abellio Greater Anglia (tel: +44 345 600 7245; www.abelliogreateranglia.co.uk) runs trains to and from London Liverpool Street station, but this service can take up to 1 hour 30 minutes.

There are direct trains between Cambridge and Birmingham, Ipswich, Leicester, Norwich and Peterborough. Cambridge connects with Leeds, York, Newcastle, Edinburgh and Glasgow via Peterborough.

The railway station is about a 20-minute walk south of the city centre. There are regular buses and taxis available from the station; journey time to the city centre is usually about 10 minutes.

A family-run hotel that offers personal service and a friendly and relaxed atmosphere, the classically decorated Lensfield is housed in a building dating back to around 1850, located in the heart of Cambridge. It offers a dining room and conservatory for breakfasts, a new boutique wellness spa and a small, intimate bar.

This luxury modern hotel enjoys a perfect location on the banks of the River Cam. It has air-conditioned rooms, a heated indoor pool and a fitness centre/health club including sauna, steam room and solarium. The excellent Marco Pierre White Steakhouse Bar & Grill overlooks the gardens and the river.

This smart and sophisticated B&B is centrally located in a Victorian townhouse. There are 10 rooms split over four levels, all offering a flat screen TV, free Wi-Fi access and tea and coffee making facilities. The rooms have been decorated in light neutral colours and have beautiful oak furniture with most rooms having a park view.

This modern hotel is 11km (7 miles) west of Cambridge and is a reasonably priced out-of-city option, with 120 spacious bedrooms, plus tennis courts, an indoor pool and award-winning dining. Following a £150,000 refurb, it now has a new-look restaurant, bar and health club.

Famous for its spectacular roof terrace and the views from its light-flooded rooms, this unapologetically modern hotel occupies a riverside location in the heart of the city. Its partnership with the Elemis Spa ensures a luxurious experience for all guests.

This cute little guesthouse has racked up the awards over the years, thanks to its warm service, luxurious rooms and scrumptious breakfasts. All rooms have Wi-Fi, TVs, deliciously comfortable beds and tea making facilities, but it's the welcoming owners that set this place apart.