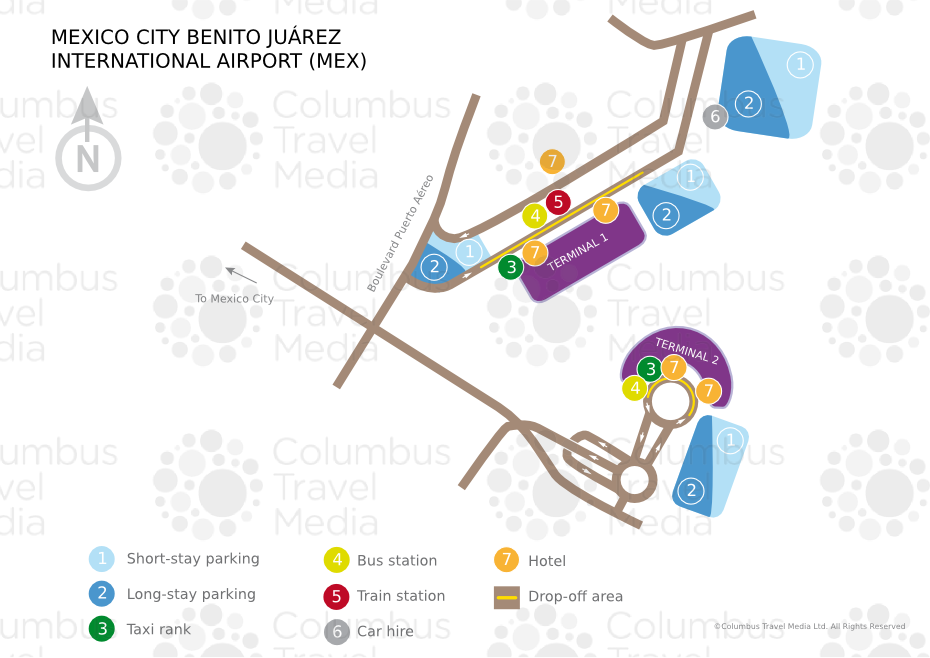 The construction of a new Mexico City International Airport was announced in September 2014. The new airport will replace the current Mexico City International Airport, which is at capacity. It is to have one large terminal and be located roughly 10km (6 miles) northeast of the current airport. The airport construction is estimated to take roughly eight years, and began in 2015.

The Air Train shuttle train runs between the two terminals. The transfer time is around 5 minutes and passengers must be in possession of a boarding pass or e-ticket. Minibuses also operate around the airport site.

Bus:There are regular airport buses to various destinations in and around Mexico City, departing from the arrivals areas of the terminals – ticket desks are located in both terminals. Long-distance buses are also available from outside both terminals.

Taxi:Pre-paid taxi coupons are available from the Transportación Terrestre booths in the baggage reclaim areas. Travellers are strongly advised to take an authorised pre-paid taxi and always lock taxi doors when inside. Official taxi operators at the airport include Porto Taxi and Room 300; a full list of authorised providers is available on the airport's website. Fares to the city centre range from M$300 to M$400, and the trip takes between 40 and 60 minutes.

Metro:The Mexico City Metro (tel: +52 55 5709 1133; www.metro.cdmx.gob.mx) is a cheap and quick way to travel between the airport and city centre; the airport metro station is on line 5 of the 11-line network. To reach the airport's station near Terminal 1, turn left out of the terminal and walk past the car park. For central Mexico City, change at Pantitlán (one stop) for line 1 and travel to Insurgentes (journey time: 15 to 20 minutes; fare: M$3). From Terminal 2, take the shuttle bus directly to Pantitlán station.

There are several banks offering bureaux de change facilities, as well as dedicated currency exchange centres in both terminals. ATMs are available 24 hours a day.

Eateries of all types can be found in both terminals, including fast-food outlets, bars, cafeterias and full-service restaurants. Some outlets are open 24 hours a day.

There is a wide range of shops at the airport, including gift retailers, clothes boutiques and bookshops. In particular, a good selection of duty-free shopping is available in Terminal 1.

Porters are on hand to help with luggage for a tip, and there are also luggage trolleys available to use for a small fee. Left-luggage lockers are available in both terminals, and a baggage packing service can be found near lounges B and D in Terminal 1. For lost or found items, contact the lost property offices (tel: +52 55 2482 2289 for Terminal 1 or +52 55 2598 7169 for Terminal 2).

Other facilities at Mexico City Benito Juárez International Airport include a medical clinic in Terminal 2, along with pharmacies and shoeshine booths.

Wi-Fi internet access (the first 15 minutes of which is free of charge) is available throughout Mexico City Benito Juárez International Airport. Additionally, an internet café is located within departure lounge E in Terminal 1, and there are numerous email kiosks at various points within the terminals. Courier services are situated in both terminals.

Mexico City Benito Juárez International Airport is equipped with ramps, lifts and adapted toilets for travellers with physical disabilities; passengers requiring wheelchairs and special assistance should inform their airline prior to travel. Car parking spaces for disabled passengers are provided in the car parks next to the terminal buildings.

Short- and long-term parking is available in three car parks close to the terminal buildings. All parking areas have CCTV cameras, toilets and designated spaces for disabled travellers and pregnant women.

Car hire companies present on-site at Mexico City Benito Juárez International Airport include Alamo, Avis and Europcar, along with a number of local operators. Each of these providers has desks in the arrivals areas of both terminals.