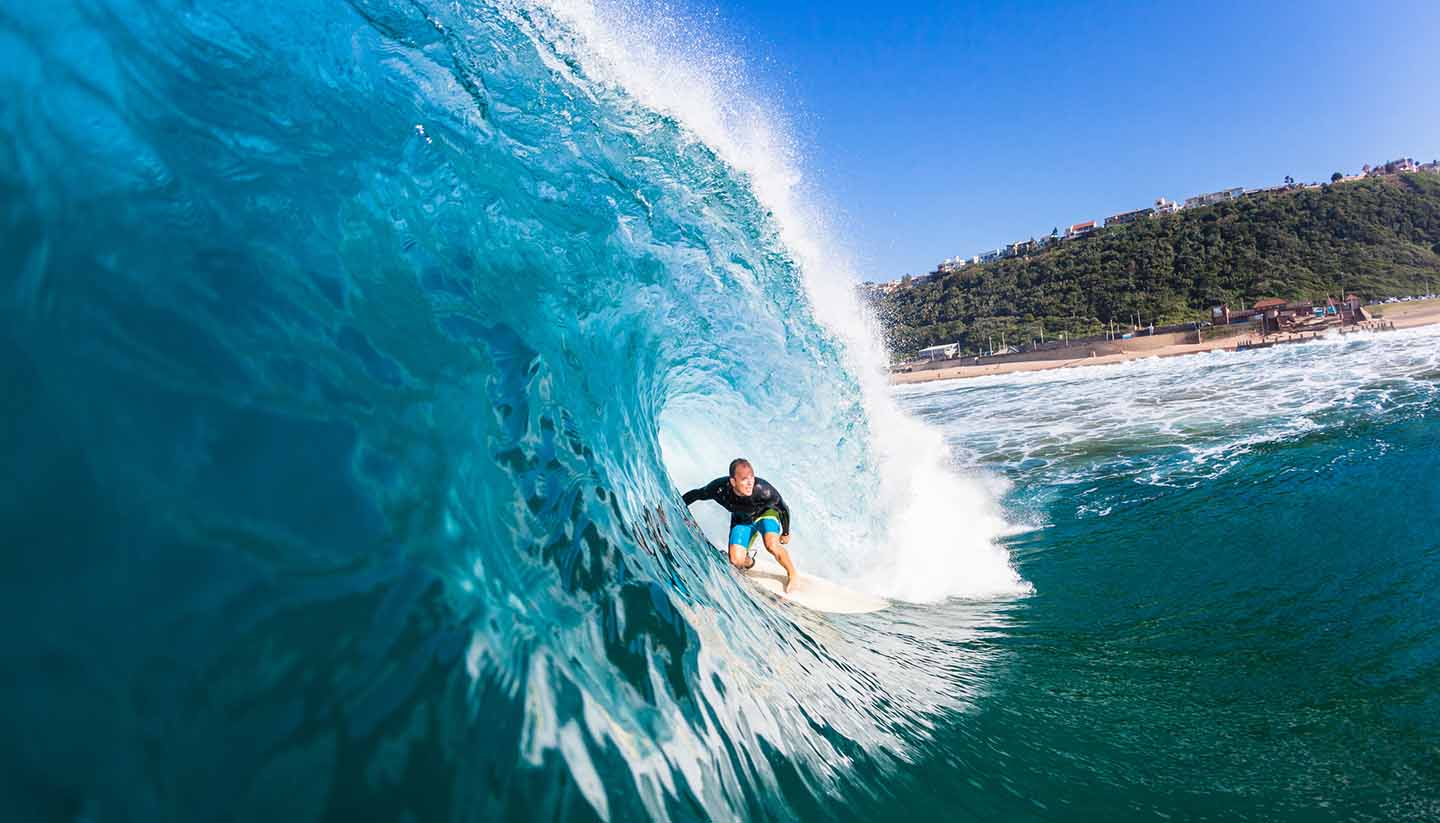 Located on South Africa's sublime Indian Ocean coast, Durban is a tropical, urban gem that has lost its reckless air in favour of a growing sophistication.

Durban's attractive, sweeping beaches are complemented by rejuvenation evident along the seafront, such as the huge uShaka Marine World, one of the largest aquariums in the world.

The Golden Mile is the most popular stretch of beachfront and offers everything from amazing snorkelling and diving experiences to nature’s unique Sardine Run.

Hotels, bars, restaurants and clubs overlook the azure Indian Ocean interspersed with remnants of art deco architecture, while cool surfers swagger along the sun-baked sands. Whale-watching, wreck-diving, fishing and kitesurfing are all on offer around the city's edge too.

But what really sets Durban apart from other South African cities is its rich ethnic mix: more than half of Durban's inhabitants are Zulu, but almost one fifth of the population is made up of Indians. The result is a potent, vibrant cocktail.

This is reflected than in Durban’s ubiquitous street food, the bunny chow, a fusion between South African and Indian cuisine - a square loaf of soft, white bread filled with spicy curry. It’s hot, messy, but delicious to eat and best accompanied by a cold beer. It’s a complete contrast to another popular tourist experience – enjoying traditional afternoon tea, a throwback to the city’s colonial past.

Diversity is also reflected in the city’s bewildering array of festivals, with Durban currently staging events dedicated to everything from world music to fashion over the course of a year.

With all this, it seems almost unfair that Cape Town gets so much of the attention, but the world loves an underdog and Durban has the bite to back up the bark.

The Concierge is a boutique hotel built on the site of eight heritage-listed buildings. Retaining its 1920's façade, the interiors however are modern, luxurious and distinctive. There are 12 guest rooms colour themed with design variations, stunning custom finished furniture and shower areas that are described as "being soaked in warm jungle rain".

Located in an excellent position high up on the bank of the Umgweni River a short distance from the city centre the Riverside Hotel & Spa offers stunning views of the green belt and nearby coast. All 169 rooms have microwaves and bar fridges while there is a swimming pool and baby sitting facilities available too. Board games can also be hired if the weather turns inclement.

With a history almost as long as that of the city itself, this iconic Durban hotel is a luxurious option. It offers four restaurants, a gym, health centre, swimming pool and even offers a dedicated floor for women travelling alone. There are 113 rooms in total, with great views of the city and the harbour.

Located on the legendary Golden Mile, this popular hotel in Durban, with 37 tastefully furnished rooms and suites, plus a classy penthouse suite, attracts those who want to chance their arm at a roulette table. In the casino and an arm's length from golden sands, it has stunning views from its huge, chic spa. It is also conveniently close to the airport.