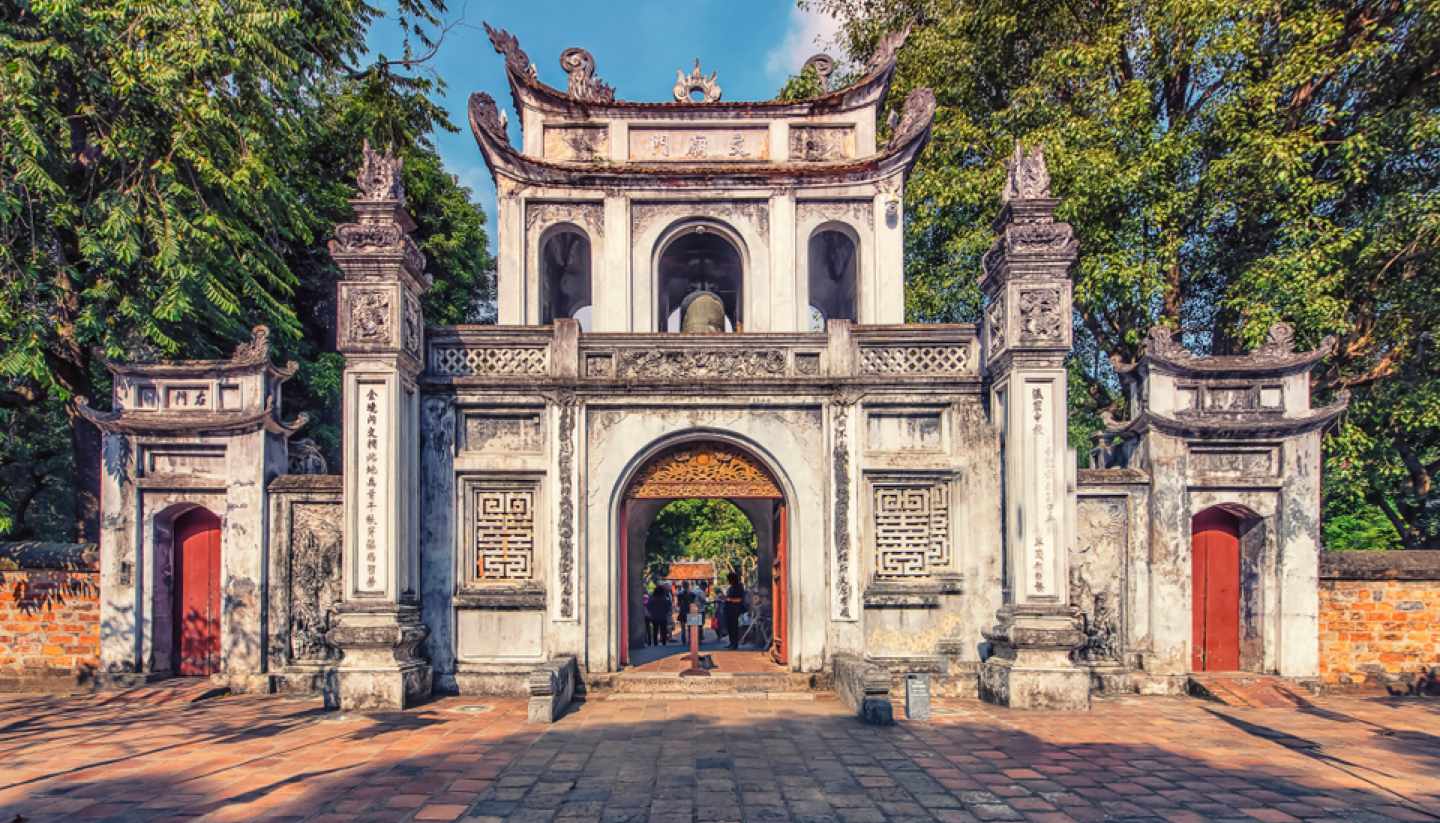 Late night beer joints, food stalls spilling out across the street and a peaceful lake for a morning stroll. Hanoi offers an eye–popping introduction to Vietnam.

The bustling, narrow streets of the Old Quarter are the ultimate expression of Vietnam’s can–do attitude. Businesses sprawl across the narrow paths, selling everything from flip-flops to locally grown coffee. In between it all you’ll find workers taking a nap on their scooters or locals cooking up treats over an open fire.

Food fanatics will find so much to love here. Don’t be put off by pulling up a child–sized chair at any one of the street side carts which dot the Old Quarter and the edges of the blissful Hoa Kiem Lake. Vietnamese food is unquestionably among the most delicious in all of Asia. Try banh mi (baguettes with cold cuts, chilli and fresh leaves) which marries Asian flavours with the fresh bread from the country’s French colonial past. Hanoi’s seafood is also legendary.

That colonial history is in evidence all over Hanoi: crumbling buildings dot the city from a time before it suffered at the hands of American bombers during the war of the 1960s and 1970s. But it’s a brutalist modern building which is the city’s most famous; Ho Chi Minh’s mausoleum is an essential stop off for any visitor. Huge crowds gather everyday to file past the body of the one–time leader of Vietnam, who helped see off French and American troops.

There are plenty of other excellent cultural highlights, from the ancient Temple of Literature and its peaceful gardens to the thought provoking and politically charged Hoa Lo Prison, which once housed Vietnamese prisoners during French rule and was nicknamed the Hanoi Hilton by the U.S. troops held there during the war.

Be sure to sink a cheap and cheerful bia hoi, a light, local brew, at one of the bars around the pretty St Joseph’s Cathedral - just be careful crossing the road after you’ve had a few as the locals on their laden scooters won’t stop for anyone.

A stunning colonial-style hotel, the Hilton is built next to the Opera House (hence its name) in the French Quarter. The rooms are large and chic with a hint of Vietnamese style. A short walk from the Old Quarter, the open-air bar of the hotel's Ba Mien restaurant is a popular nightspot.

As the newly extended wing of the Essence Hotel & Spa this stylish comfortable property in the heart of the Old Quarter offers excellent value. Despite being positioned a few steps from the popular Beer Corner its spacious rooms are quiet. The staff are professional and friendly while the restaurant is exceptional.

Located in the Old Quarter, La Dolce Vita is a good base from which to explore the city at an excellent price. The rooms are large, bright and comfortable, decorated in traditional Vietnamese style and with good facilities. The hotel's restaurant and lobby bar serve Vietnamese and Western food.

Located right by Hoan Kiem Lake, and within walking distance of the Old Quarter, this classy hotel offers good value. The rooms are smart and well-maintained, while the restaurant serves both Vietnamese and Western cuisine. The rooftop bar, with panoramic views across the city, is a great place for a drink.

This stylish hotel on the edge of the Old Quarter has large, well-lit rooms decorated in Vietnamese style. There are two restaurants serving Western and a fusion of Asian food, one being on the top floor with great views across the city. There’s also a fitness centre and spa, including a sauna and Jacuzzi.

The narrow entrance is barely noticeable, but this boutique hotel is well known for its stylish combination of colonial and art deco design. It’s within walking distance of Hoan Kiem Lake and ideal for exploring the Old Quarter. With its own restaurant and spa, this is a real find in an excellent location.