the IDs1514Prague Airport
Places in Prague

First things first – Prague offers a great night out. Its bar and club scene rightly enjoys renown, but these days the reputation is founded on far more than stag-friendly strip dens. If you're after high culture, great beer, quality DJs or anything in between, there's plenty to keep you busy.

The choice of discos and dance clubs is far greater than it was a decade ago, although when it comes to night-time entertainment, the city still sometimes falls into the trap of quantity over quality, so it's probably best to plan your big nights in advance. Be aware too that just as the city's drinking venues vary widely, so too do its prices – there are some seriously swish bars in town, but you'll pay for the privilege.

Lap-dancing clubs can still be found here in abundance, although many bars, restaurants and clubs (especially around the Old Town) have banned or actively discouraged stag parties, so Prague isn't quite the destination it used to be for budget debauchery.

Of course, the traditional recipe for a great night in Prague involves beer and music - two ingredients the Czechs excel both at making and enjoying. For many, rubbing shoulders with the locals while enjoying world-class lagers in a welcoming bar or traditional beer hall, before moving on to one of the city's various jazz clubs, provides the perfect authentic evening.

This bar focuses on Ernest Hemingway's drinks of choice: absinthe, rum and champagne. You can find over 200 varieties of rum on offer and the most extensive collection of absinthe out of any bar in the Czech Republic. This is the place for those who love a great cocktail.

If there's one place in town that can claim to give a comprehensive overview of the country's love affair with beer, it's here. Despite its name, this isn't so much a club as a mecca for lovers of a quality tipple, offering more than 200 bottled beers and six on tap at any one time. As well as typical Czech varieties, you'll find brews from Belgium, Germany and further afield. There's great food to soak it up too.

One of the city’s most authentic old taverns, this is a traditional beer hall serving up great pilsner to narrow, smoky tables full of drinkers. The fact that, even here in the tourist-filled Old Town, it remains hugely popular with locals (particularly at the end of each working day) says much about its magic. Former president Václav Havel famously brought Bill Clinton here.

Another club in a prime position, this time at the top of a building overlooking Wenceslas Square. The rooftop terrace makes this a great place for a coffee break during the day, but by night this is one of Prague's hottest clubs, with a slick lounge-bar format that attracts the city's top DJs and some of its most elegant clientele. It is no wonder Mick Jagger celebrated his 60th birthday here.

With an emphasis on slick service, classy cocktails and good DJs, Fashion Club's bid to attract Prague's beautiful people has been a success since the venue opened at the top of a former communist department store. The club itself is a smart, on-trend nightspot, aimed mainly at the young and moneyed, and the panoramic views on offer help its credentials. Its on-site restaurant is worth investigating too – particularly if you happen to have a craving for caviar.

Owned by an expat New Yorker, this club has been a strong player in the Prague nightlife scene for a while now, and although it's got a luxury vibe thanks to an extended dance floor, a cocktail bar and serious VIP space, the emphasis here is still about the music, with the club's team of DJs spinning a well-received selection of hip-hop and house, R&B and indie rock.

An art gallery and theater during the day, this former warehouse hosts live music programmes at night. Expect regional artists and up-and-coming bands performing alternative, rock and folk, among other genres.

First founded back in the 1950s, this venue can lay a strong claim to being Prague’s oldest and best known jazz club. As such, it has hosted some great musicians over the decades – not to mention ex-President of the United States, Bill Clinton, who famously played his saxophone here. There are live music acts on every night.

A tourist attraction in its own right, this stunning neo-Renaissance building in the city centre has, since 1946, been the seat of the world-class Czech Philharmonic Orchestra. Boasting internationally renowned composers Antonin Dvorak and Bedrich Smetena among its countrymen, classical music remains at the heart of the Czech Republic’s cultural history, and this is the perfect venue to enjoy a little of it, especially during Prague’s Spring Music Festival.

Music and Dance in Prague

Consisting of a concert hall, theatre and cinema, Palác Akropolis is an established cultural complex in Prague. It puts on nearly 1,000 events annually, mainly focusing on art, music and theatre. You may well catch international indie, rock, metal or world music acts that are touring in this intimate setting. Be warned, though, it's a popular joint and sells out quickly, whether it's for homegrown talent or acts like Marianne Faithful, Megadeth, Sigur Ros or The Strokes, all of whom have gigged here in the past.

Another fantastic neo-Renaissance building, the Prague National Theatre, standing proudly on the bank of the Vltava, is regarded by Prague's citizens as one of its most important institutions and a historic key-stone in the country's cultural development. Here, amongst the sumptuous late-19th-century décor, the Prague Opera and Ballet perform regularly within a calendar of Czech drama and advent concerts.

From neighbourhood boozers to backstreet breweries, Gavin Haines sidesteps the stag-dos to unearth the best bars in Prague. 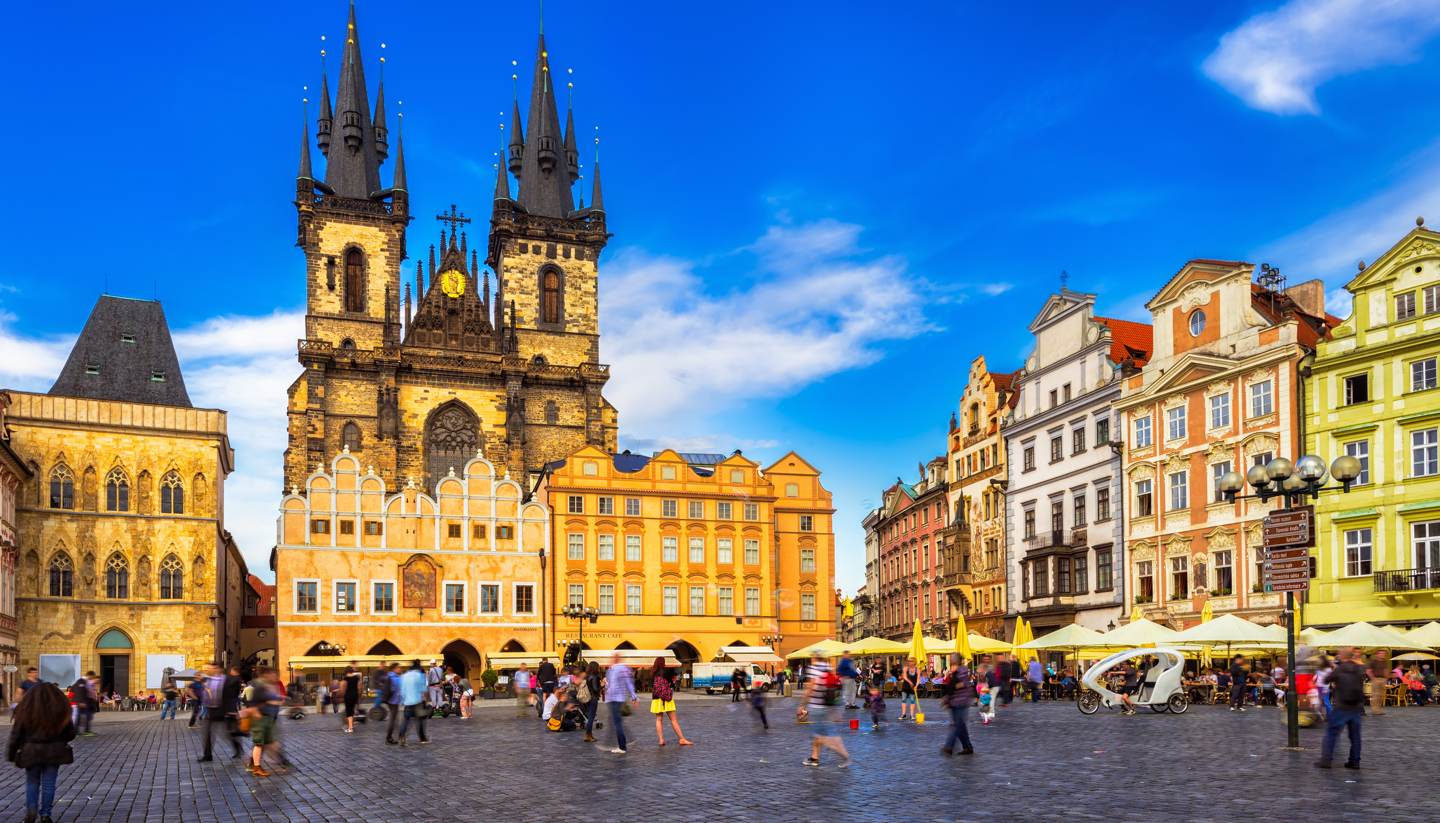 With grand baroque squares and Gothic spires, Prague has the storybook looks that make an impression regardless of the season

Near to a metro station and a 20-minutes walk to the Old Town Square, this modern hotel offers great value for money with its 214 clean and bright rooms coming in five categories - double, premium king, twin, triple and family, all of which are generously proportioned and come with free Wi-Fi. This is also a comtemporary restaurant and bar.

As you’d expect, Prague’s luxurious Four Seasons Hotel enjoys an unbeatable location, perched below Prague Castle and only a stone's throw from Charles Bridge. Everything here is as it should be at a Four Seasons. There are 19 suites, including the sumptuous Presidentia, furnishings are elegant and artwork original, and there’s a 24-hour concierge service, state-of-the-art gym and spa. The hotel also goes out of its way to create a child-friendly environment, with complimentary cots and a babysitting service.

The location of this hotel in Prague is spot on, only a short walk from Námìstí Republiky, the Municipal House and the beginning of the Royal Road. Guests have access to a health club, pool, gym and sauna, as well as local tennis courts and a golf course. The rooms blend state-of-the-art facilities with comfortable furnishings and contemporary styling.

This light, bright and super-modern hotel in Prague provides the perfect antidote to the heavy gothic architecture that dominates the surrounding city centre. Designed by Eva Jiricna, with a spectacular glass atrium as its focal point, the hotel's 110 luxury rooms all come with equally contemporary facilities, from high-end designer bathroom suites to Wi-Fi access.

Dating from 1772, this fascinating historic building, enviably situated in the Old Town between Charles Bridge and the Old Town Square, was once a Jesuit convent, before serving as offices for the Soviet secret police. This cheap hotel in Prague now provides 73 comfortable rooms ranging from singles to triples. Unlimited buffet breakfasts are served in the former chapel.

Situated between the city centre and the Royal Gardens of Herrenhausen, this small but comfortable hotel has two underground and bus stations nearby and the Exhibition Grounds are 25 minutes away by car or U-Bahn.