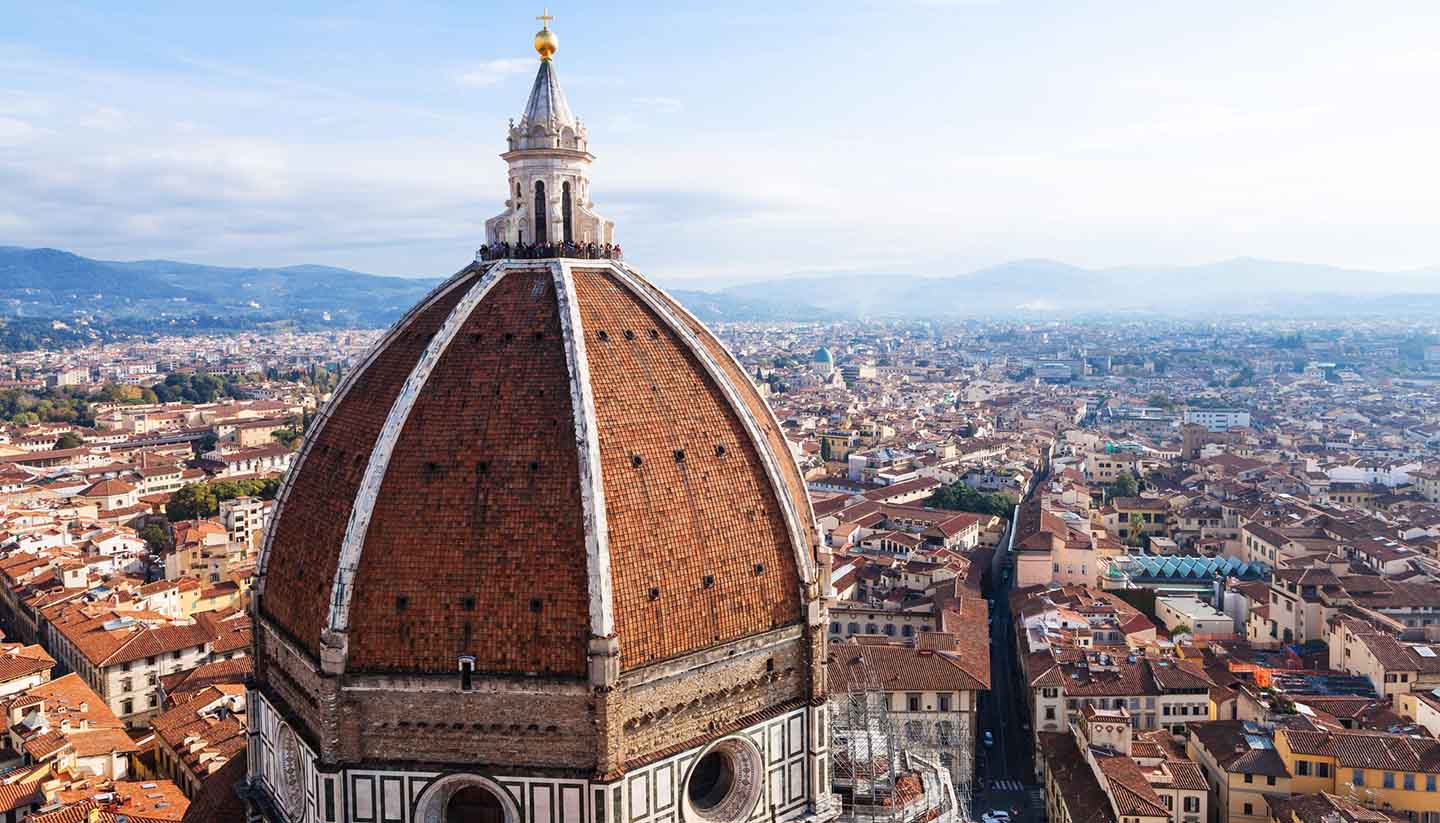 Esteemed Florence isn’t just one of Italy’s greatest cities – it’s one of Europe’s cultural jewels. First-time visitors have a habit of being overwhelmed by the sheer depth of the place, spending their time dashing from one masterpiece to the next. It's understandable: the cradle of the Renaissance houses some of the world's greatest artistic treasures.

It’s also incredibly beautiful: a cluster of russet roofs and late medieval splendours set amongst the wine-growing hills of Chianti. Its ancient palaces, curvaceous domes and lofty basilicas are stuffed with fine art and world-class galleries, most prominently the Uffizi. The whole of the city’s historic centre is classified as a UNESCO World Heritage site.

Dominating this centre is the Duomo, the city's Cathedral, a landmark of elegance and beauty. Nearby, the River Arno is crossed by the famous Ponte Vecchio bridge, still lined with shops and held up by stilts. Dating back to the 14th century, the bridge survived attacks during WWII. Standing by the river at night, with the city illuminated by twinkling lights, it remains an unforgettable sight.

If you want to get away from the crowds (notably the millions who descend on the city in the summer), head to the city’s south where there are hills, gardens and churches. A walk up to San Miniato hill takes you to one of the highest points of the city, topped by a Romanesque basilica. Again, the views are superb.

But for all its old-world splendour, to see the Tuscan capital purely through the prism of history is to do it a disservice. It’s also a dynamic and cosmopolitan 21st-century city, with its food and drink particular highlights. Gelato is a Florentine institution elevated almost to an art form.

Retail therapy is another of its charms. Fashionistas head to Via de’ Tornabuoni for upmarket labels, while the city’s abundance of markets are also worth exploring for their riot of colours and smells. In particular, the San Lorenzo Market, stretching from Piazza San Lorenzo to Via dell’Ariento, is fun for meandering.

This chic art hotel stands on a small square not far from the Ponte Vecchio and attracts a host of funky young designers and artists. Cool modern interiors are a world away from the medieval rat race outside. Communal spaces display rotating collections of contemporary art and the guest library contains over 400 books.

Set in 16th-century building on the River Arno, this charming hotel on a quiet back street is within a 10-minute walk of top sights such as the Uffizi Gallery, the Ponte Vecchio and the Duomo. The rooms feature antique furniture, Wi-Fi access and air-conditioning, and most have private bathrooms; some have river views. Breakfast is included.

Located outside the historic old town of Florence but only a 15-minute walk from the Duomo, this budget hotel makes its guests feel welcome with friendly staff and spacious, modern rooms (some with balconies and/or jacuzzi tubs). Breakfast and Wi-Fi access are included in the room rate, and the hotel provides parking, although free spaces can usually be found in the surrounding streets.

Hotel Lungarno has views to die for. Anywhere closer to the Ponte Vecchio and guests would be on top of it. The recently renovated 59 rooms and 14 suites of this lavish hotel have classic interiors with contemporary touches, and merge strong and serene colours. Little betters a glass of fizz on a private balcony here as the River Arno twinkles by.