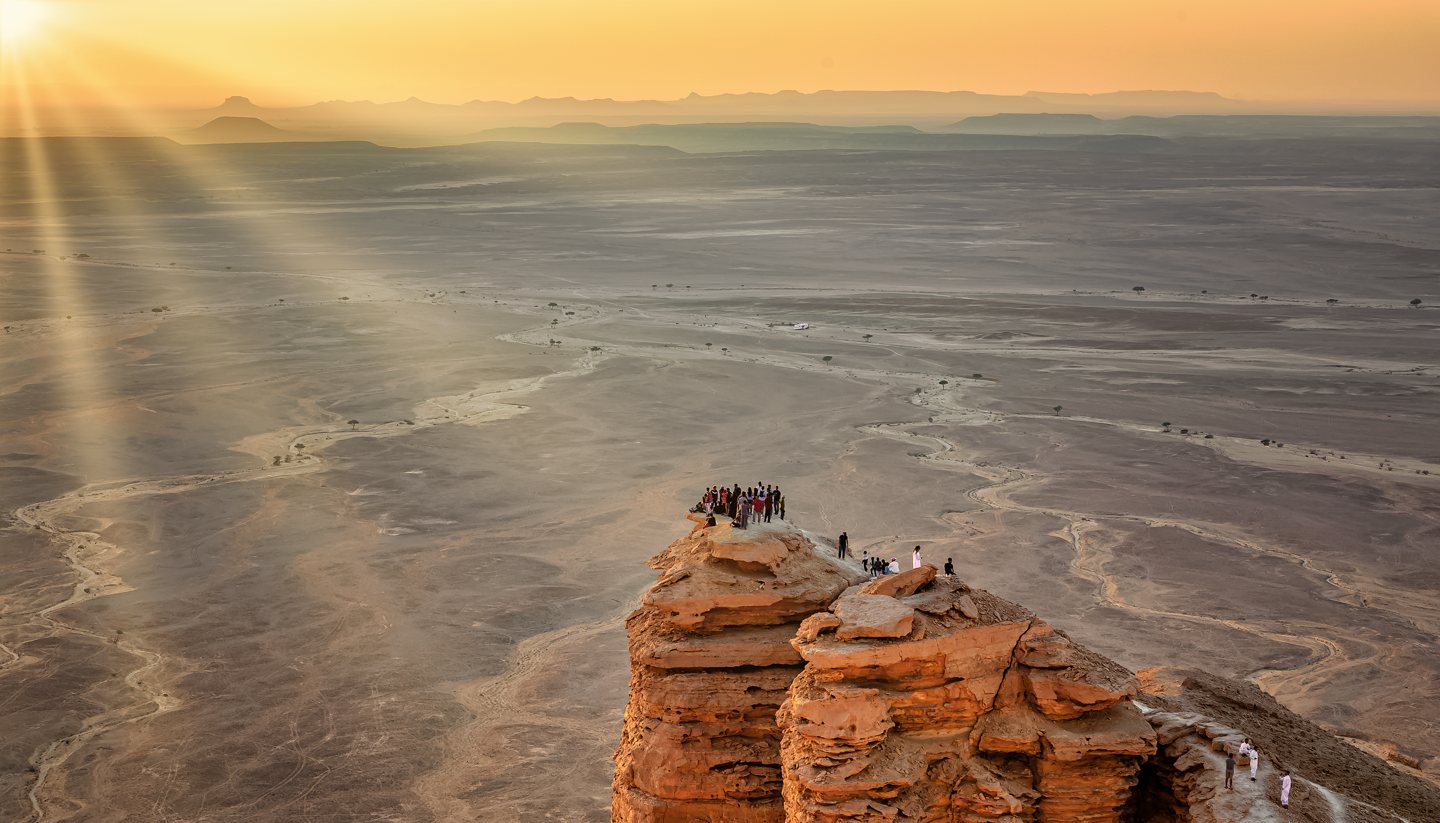 Saudi Arabia has a desert climate characterised by dry, hot summers and mild winters. Rainfall is scarce, and sharp temperature changes between day and night should be expected.

Spring (March to June) is warm, though the temperatures at night can dip below 15°C (59°F) in the north, but in the south (particularly around Abhā in the southwest), spring is the rainiest season.

Summer (June to September) is long and hot; it is usual to see the temperature hitting 45°C (113°F). However, the hilly southwest is much cooler.

Autumn (October to November) is still relatively warm with day time temperatures hovering around 30°C (86°F), although evenings are pleasant, with temperatures dropping to around 15°C (59°F) in most cities.

Winter (December to March) is the best time to visit Saudi Arabia as the weather is mild with plenty of sunny days and cool nights. It is possible to see snow in the north – you may even be lucky enough to try snow sledging in the mountains around Tabuk.

Riyadh, the capital of Saudi Arabia, sits on a rocky plateau in the centre of the country. Its relatively high elevation (594m or 1950ft above sea level) means that it is sunny year-round and less humid than other Saudi cities. July and August are the warmest months with an average temperature of 36°C (97°F). The period between June and September is also dry with no rain at all, while the months between November and April receive about 100mm (4in) of rain.

Jeddah, a major port city on the Red Sea coast, has hot and humid weather. July is the hottest month in Jeddah with an average high of 38°C (100°F) while January is the coolest month with an average high of 28°C (82°F). The city receives very little rain, averaging just 20mm (0.8in) a year. The evenings are mild in Jeddah and they offer opportunities to enjoy the waterfront, the Jeddah Corniche, which features miles of sandy beaches and three swimming bays.

Makkah, also spelt Mecca, is the holiest city in Islam as it was here that the Quran was first revealed to the Prophet Muhammad. The city sits in a desert valley 86km (53mi) east of Jeddah. Daytime temperatures often hover above 40°C (104°F) between May and September but the evenings are cooler. The weather in January is most pleasant, with an average high of 31°C (88°F) and an average low of 19°C (66°F).

Pack sunscreen, sunglasses and sun hats, and use layers (light sweaters or scarves) for air-conditioned buildings and cooler evenings.

A rain jacket may be required, depending on when and where you are going.

The largest country in the Arabian Peninsula, Saudi Arabia is bordered to the northwest by Jordan, to the north by Iraq and Kuwait, to the east by the Persian Gulf, Qatar and the United Arab Emirates, and to the south by Oman and Yemen. To the west lies the Red Sea. Along the Red Sea coast is a narrow coastal plain (Tihamah), which is hot and humid throughout the year. Beyond the plain is a series of hills and mountains, and in the southwest, near Abha, is where you will find Jabal Sawda, the highest point of the Kingdom standing at 3,133m (10,279ft) above sea level.

95% of Saudi Arabia is desert. Rub' Al Khali, meaning the Empty Quarter, occupies 650,000 sq km (250,966 sq mi) in the south-eastern part of the country. This is the largest desert in the Arabian Peninsula and is absolutely beautiful – visitors can expect undulating sand dunes rising from the ground and rolling away to a distant horizon. Another sizable desert is Al Nufud Al Kabir, located near the borders with Iraq and Kuwait. The sand dunes here can be shaped into mounds towering over a hundred meters.