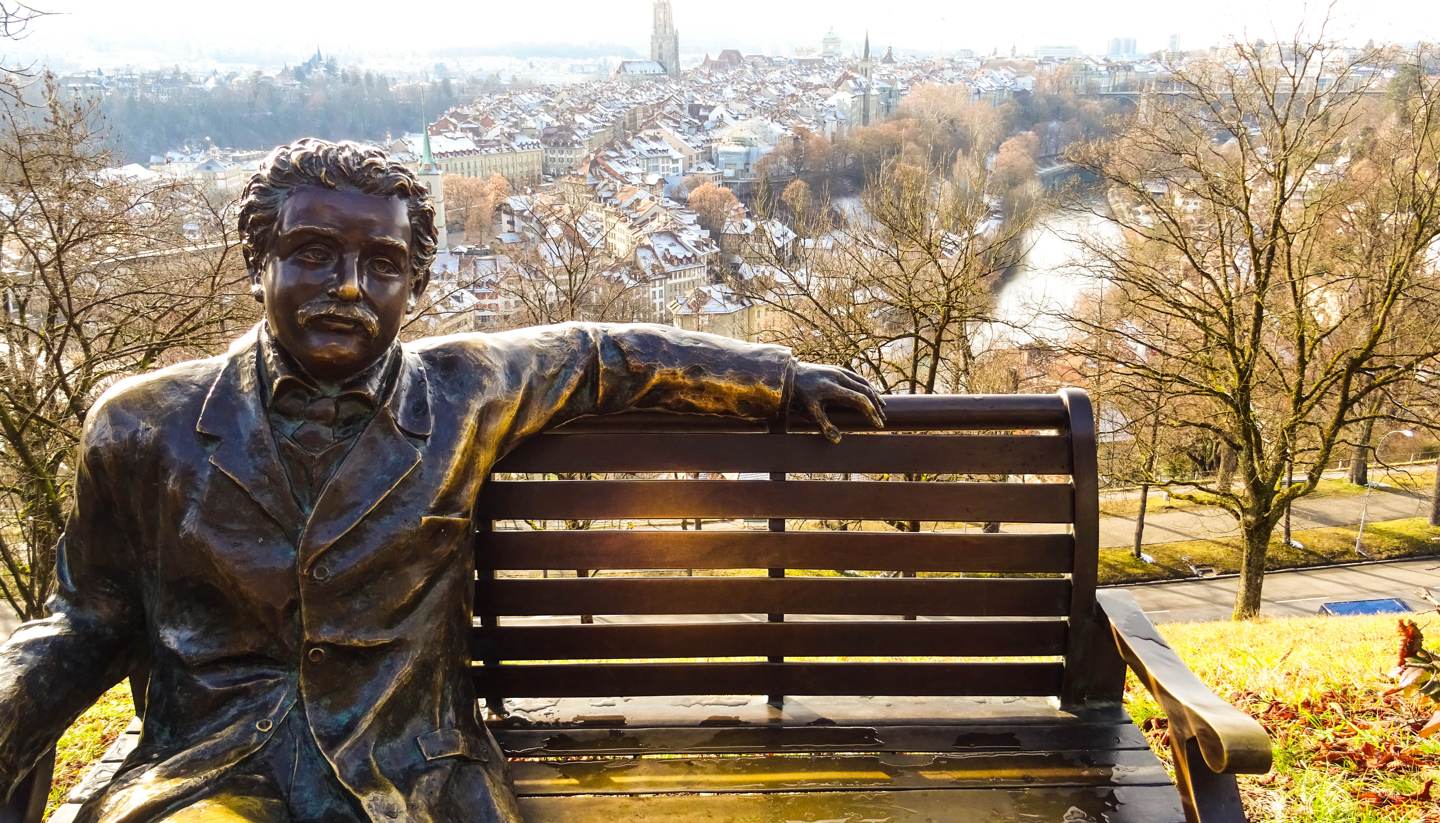 the IDs1506Bern-Belp Airport
Places in Bern

Switzerland typically does things on a grand scale – the craggy bulk of the Matterhorn, the glossy prestige of Geneva, the epic ski slopes of Graubünden – so for the modestly proportioned Bern to be its de facto capital can seem incongruous. What this likeable little city lacks in headline-grabbing majesty, however, it more than makes up for in charm.

Set on a crook in the River Aare, it’s a place where history looms large, with a UNESCO-listed old town, medieval clock tower and gargantuan cathedral all lending the place a stuck-in-time feel. It also has a strange fascination with all things ursine – the name ‘Bern’ is said to have derived from when the city’s founder killed a bear here on the Aare peninsula, and there have been bear pits in the city ever since. Visitors can still see the resident bears living freely, climbing, fishing and playing by the river in Bern’s Bear Park.

Another equally unique tourist opportunity is for strong swimmers to join the locals in drifting along the river, passing superb views of the city’s architectural riches along the way, including the House of Parliament.

Back on land, the many high-quality restaurants, bars and wine cellars are as varied as the city’s excellent museums, which range from the grandiose Bern Historical Museum to the quaint Einsteinhaus, a flat that was once home to the city’s most famous resident: Albert Einstein.

You may well need Einstein’s mathematical expertise when it comes to shopping, because Bern isn’t cheap – expect fine jewellers, premium chocolatiers and exclusive designer boutiques. Browsing the 6km (3.7 miles) of 15th-century arcades in the Old Town, though, is a delight.

Another unique characteristic of Bern is its fountains; there are over 100 of them. Each tells a story about events and heroes in the city’s past. The most gruesome – and consequently the most famous – is the Kindlifresserbrunnen located on Kornhausplatz, which depicts an ogre swallowing a child.

Bern even has its own mountain, the Gurten, popular with locals and visitors in the summer thanks to its sweeping views, miniature railway and observation tower. Sleek towers and financial clout? Overrated. Bern has something far harder to buy: charm.

This friendly 2-star bed and breakfast hotel boasts a central yet quiet location at the heart of old Bern, near the BearPark, the river and the clock tower. The 12 simple rooms are basic but comfortable. There is also a popular café bar and summer pavement terrace.

Hotel National Bern is a family-run hotel built in 1908 and continues to offer bags of character, from its exposed room beams to its original fin-de-siècle lift. The location’s good too, with the central train station just five minutes away. There’s a free welcome drink and 10% discount voucher for the restaurant for all weekday guests.

The Continental is an Oslo institution that has been run by the same family for four generations and is more than a century old. Situated in the heart of Oslo, next to the National Theatre, the hotel is known both for outstanding service and restaurants as well as its links with the Oslo arts scene.

Located in a park overlooking central Bern, this luxury hotel oozes personality and style. Home to one of the country's best jazz clubs, Marians Jazzroom, it also has two excellent restaurants. All 26 rooms are individually decorated (some with a jazz theme) and each has Wi-Fi access. The hotel also has conference rooms.

Boasting more than 150 years of history – not to mention a guest book that features the likes of Elizabeth Taylor and Grace Kelly – the high-end Hotel Schweizerhof remains one of Bern's go-to luxury properties. It benefited from a two-year renovation in 2009. As well as some great restaurants and bars, it also has a spa, cigar lounge and conference rooms.

A solid bet for a mid-range stay, with an Old Town location five minutes' walk from the train station. Its impressive art nouveau exterior hides a more modern interior, and there's a good restaurant on site – the Volkshaus 1914. The property sits adjacent to the medieval Zytglogge Tower.