The best of France 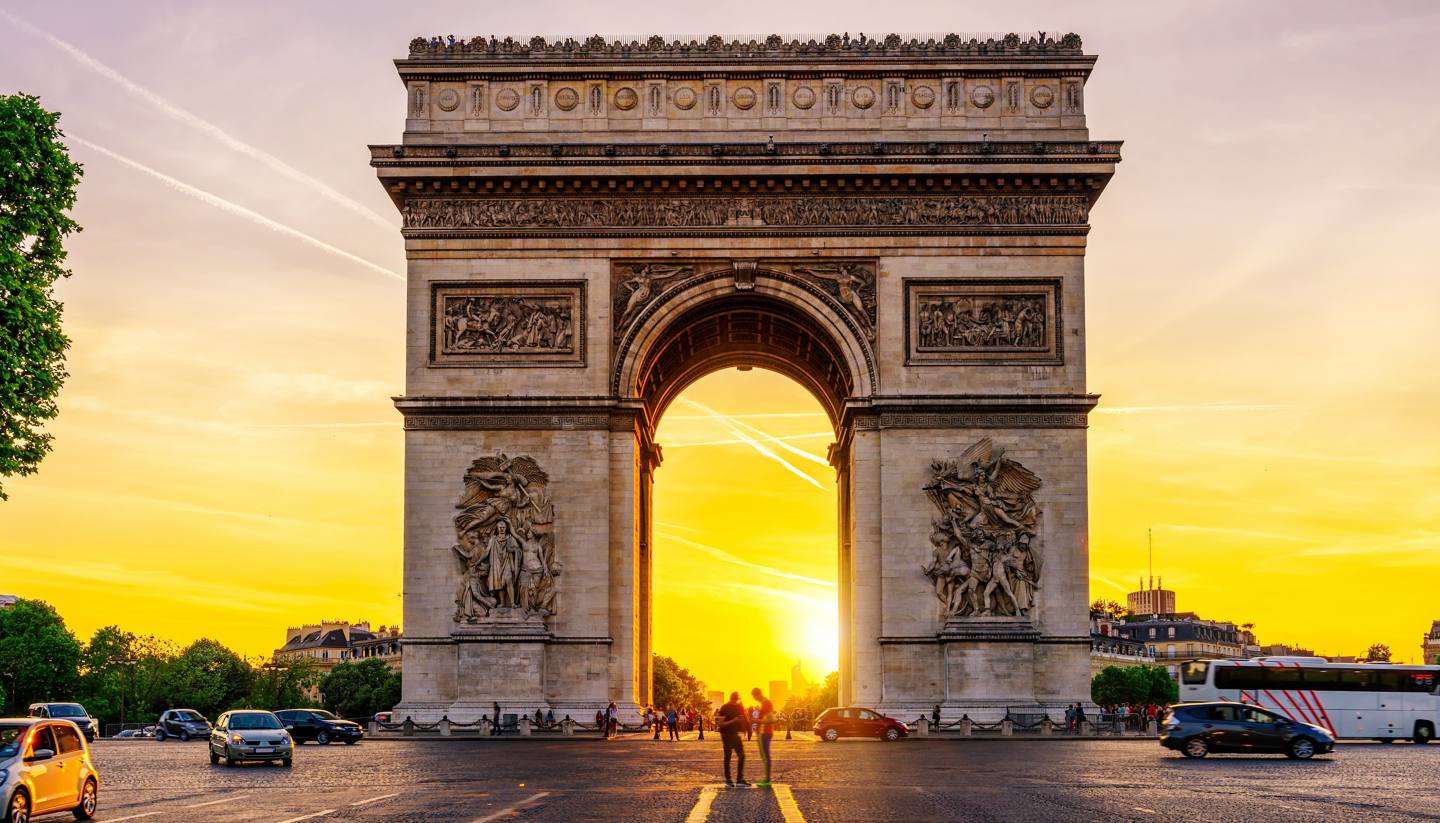 There’s no country that entices the intrigued or allures the curious like France. Whether you want to seek out the iconic sights, explore the abundance of attractions or are in need of some creative inspiration, which flows as rapidly as the sparkling wine in the historical region of Champagne, France is utterly timeless – and is bound to draw you back again and again.

France is notably one of the world’s oldest nations and has successfully managed to preserve its past. At every step, you’re met with another museum, art gallery or striking architectural feat, and around every corner, patisserie windows showcase jewel-like confectionary – the perfect accompaniment to a morning coffee or afternoon tea.

A holiday to France will tick all the boxes with its diverse landscape and abundance of adventure waiting to be experienced.

To simply describe the city of love – a glowing ember of light and a boulevard lined labyrinth of perpetual romance and profuse sophistication won’t do it any justice. Paris truly has to be experienced – from the moment the sun illuminates the Arc de Triomphe until the city is shrouded in darkness, brightened by the moon and the Eiffel Tower, which twinkles on the hour until sunrise. Strolling down the Champs-Élysées Avenue or along the River Seine, baguette in hand is one way to embrace the Parisian lifestyle – maybe just hold back on the beret.

Before you go, see the Paris city guide and Paris food & drink guide: 10 things to try in Paris. 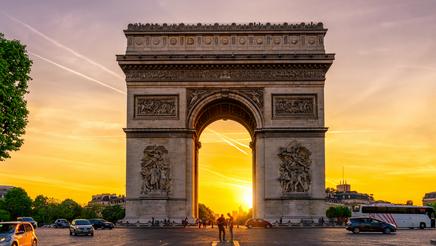 This wine capital won’t disappoint, and its ancient tradition of viticulture means that you’re among the masters. You should begin your wine tour at the Cité du Vin – a museum dedicated to the universal, living heritage of wine before exploring the rest of the port city, which is also the world’s largest urban World Heritage Site. A highlight of this heritage site is the Place de la Bourse, an imposing city square surrounded by an array of 18th to 19th-century mansions, straddling the curving Garonne River. More beauty can be found within this city’s prominent art museums, such as Musée des Beaux-Arts de Bordeaux, which boasts enough captivating works to lure you away from the vineyards for a few hours or so.

Before you go, see also the Bordeaux city guide. 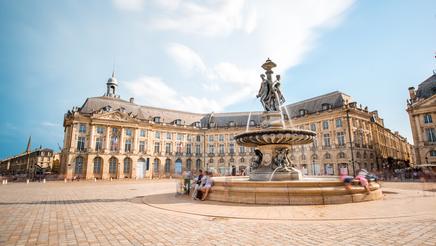 View of the famous La Bourse square in Bordeaux city

France isn’t all cityscapes and wineries, as this stylish strip of the French Riviera sits at the foot of the Alps and is embraced by the Mediterranean Sea. When standing on its pebbly shores, sprinkled with blue and white deckchairs, and looking out onto the glittering sea, it’s easy to see why this fusion of French and Italian influence garnered the nickname ‘Nice la Belle’ – Nice the beautiful. The Promenade des Anglais, a famous seafront boulevard, is the place to see and be seen while Colline du Château, a castle turned public garden, is ideal for taking in the vistas of Nice’s old town and the shoreline below.

Before you go, see the Nice food & drink guide: 10 things to try in Nice. 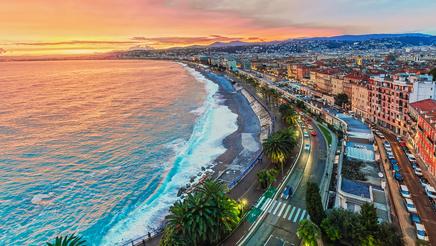 In the months of summer, you’ll smell the intoxicating lavender aroma of Provence, before stepping foot into the purple-hued haze of natural splendour. The meandering lanes continue past these lavender fields, and traverse along staggering cliff tops, Roman remains and sun-soaked sweeps of vineyards. Make sure to stop off a Provencal market on your journey to pick up some local produce – the Friday market in Carpentras is one of the most popular. Exploring the sights of Avignon, a countryside town on the Rhône River is also recommended, particularly Palais des Papes, the largest Gothic palace ever built. 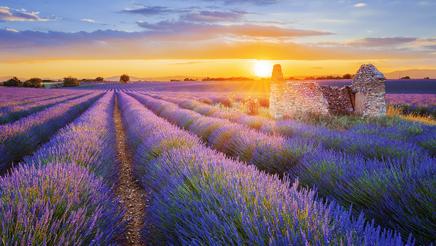 Sunset over a beautiful purple lavender field in Valensole

Famous for attracting an elite and glitzy crowd in the 1960s, this sultry spot is still worth a sojourn as the glamour of this coastal town on the French Riviera has hardly faded. Glimmering yachts line the bay, and chic cafés and refined eateries spill out onto the streets of the city centre, while the pebbled beaches, speckled with colourful umbrellas and deckchairs offer a more relaxing scene. This former fishing village does also have a cultural side to it, with a collection of notable galleries and museums, including Musée de l’Annonciade and Citadelle de St-Tropez. 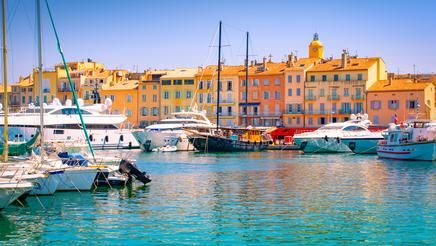 Eschew the seaside backdrop for a more alpine settling in the mountain ranges of the French Alps. Extending across seven European countries, the Alps reach their highest point in France and Italy at Mont Blanc (4,808.7m (15,777 ft). On the northern side of the mountain, France’s largest glacier, Mer de Glace, can be viewed by the Train du Montenvers – a picturesque cog train. Chamonix is one of the most popular resort areas in the mountain and a sought-after skiing destination. Cable cars are strung along the landscape, transporting adventurers to the top of pistes, before they race back down into the valley. As summer comes around, the ice melts to reveal magnificent hiking trails and pleasant wildflower meadows. 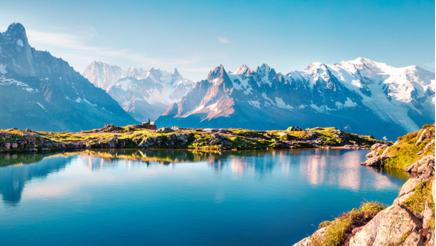 Non-European travellers may need to look up where the region of Pays de la Loire lies as the province was only created in the 1950s. Located south of Brittany and Normandy, with a part of it bordering the Atlantic Ocean, the Pays de la Loire region includes parts of the old provinces of Brittany, Anjou, Maine and Poitou. With the location explained, let’s move swiftly to its capital Nantes. Nantes is the birthplace of Jules Verne, author of many well-acclaimed science fictions including Journey to the Center of the Earth and Twenty Thousand Leagues Under the Sea. Today, Nantes is a dynamic city which successfully combines historical legacy with modern initiatives. Rent a bike and ride to its many attractions – this is perhaps the best way to get around Nantes, as explained in the article “Bike-friendly cities around the world“. 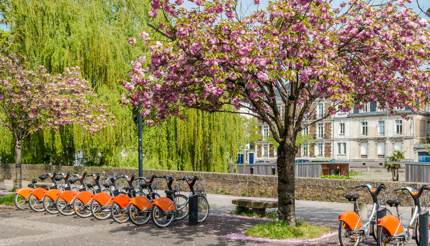 Nantes in France is bike-friendly

About 132km (82 miles) east of Nantes is Saumur, a historic town awash with vineyards and villas. Beneath Saumur, you will find a series of tunnels and galleries where boutique wineries store their bottles and run tasting sessions. There is even a restaurant, a bar, as well as mushroom farms below the surface. For more information about this underground site, check out the article “Going underground: 22 of the world’s best subterranean sites“.

Dining in France is a serious affair – and it’s easy to get wrapped up in the feasting rituals. From the breakfast croissant, a crispy gilded masterpiece, to an evening meal of beef bourguignon, doused in red wine and slow-cooked to perfection, the French are experts in exceptional fare. Michelin-starred restaurants are aplenty, endeavouring to meet your fine dining dreams of crisp white table clothes and dishes of intricate artwork. Alternatively, there are also low-lit bistros complete with blackboards displaying French classics like heartwarming stews and soups. 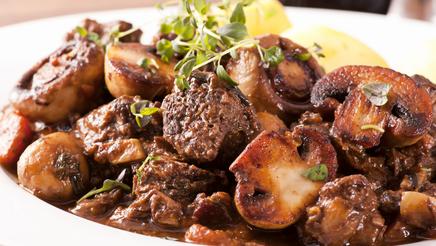 Inland, meat-heavy options, enveloped in rich sauces, served with chunks of freshly baked bread and accompanied by local ingredients will always be on the menu. Along the coast, the daily caught seafood is presented on platters, with shining mussels, oysters and lobsters. Charcuterie is also central to French cuisine, with cheese, a staple of the country, being the star of the show. There’s no better way to conclude a day in this part of the world than with a crêpe smothered in chocolate and or simply sprinkled with sugar. 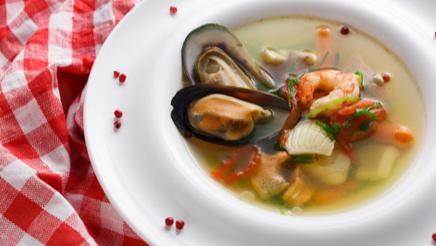 Seafood soup with white fish, shrimps and mussels in plate sprinkled with spices

The ultimate accompaniment to any dish in France is one of its regionally made wines. Dating back to Roman times, French viticulture has been refined to produce some of the best blends in the world. Wines are usually named after the region they’re grown in rather than their grape varietal, and the dozens of wine-producing regions throughout France mean that there’s always plenty to go around. For reds with the best reputation, Burgundy and Bordeaux are the places to visit, and the supreme white labels hail from the Loire Valley. Since the 17th century, Champagne has been produced northeast of Paris – and the marvellous result is unparalleled bottles of aromatic bubbles.

With so much to see and do in France, it’s tricky to narrow down the list of highlights, but if you want to cross off the most popular tourist sights, you can start with these:

Eiffel Tower: Watching over the city since 1889, this wrought-iron lattice tower on the Champ de Mars in Paris is named after the engineer Gustave Eiffel, whose company designed and constructed the tower.

Champs-Élysées Avenue: A world-famous avenue, visited each day by 300,000 people, and running from Place de la Concorde, a public square, to the Arc de Triomphe, a magnificent arch, honouring those who fought and died in the French Revolutionary and Napoleonic Wars.

Musée du Louvre: The world’s largest art museum and a historic monument resting on the banks of the River Seine, and housing over 38,000 objects from prehistory to the 21st century, as well as the famous painting of the Mona Lisa by Leonardo da Vinci.

Jardin du Luxembourg: Created in 1612 by Marie de’ Medici, the widow of King Henry IV of France, for Luxembourg Palace, this charming garden is now owned by the French Senate and features tree-lined promenades, manicured lawns and the Medici Fountain, built in 1630. 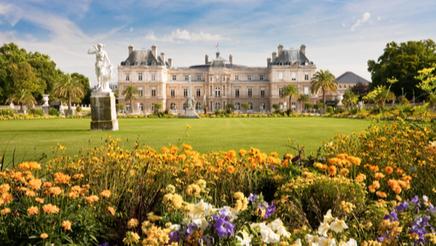 Jardin du Luxembourg with the Palace and statue

Palace of Versailles: Located outside of Paris, this former royal residence of France under Louis XIV, and then Louis XVI, is now a UNESCO World Heritage Site, with 2,300 rooms and enchanting grounds. 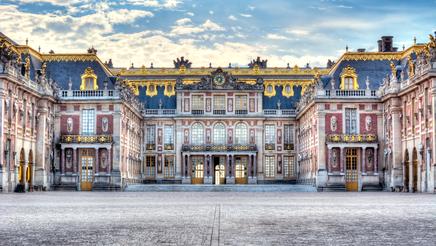 Mont St-Michel: An island and mainland commune in Normandy, home to strategic fortifications since ancient times and a functioning abbey where Benedictine monks still hold services. 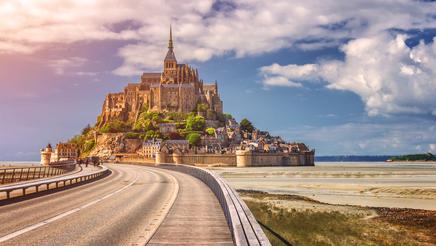 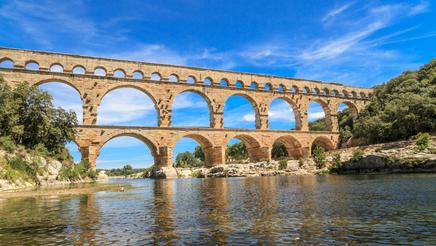 Before you go, see the France travel guide.