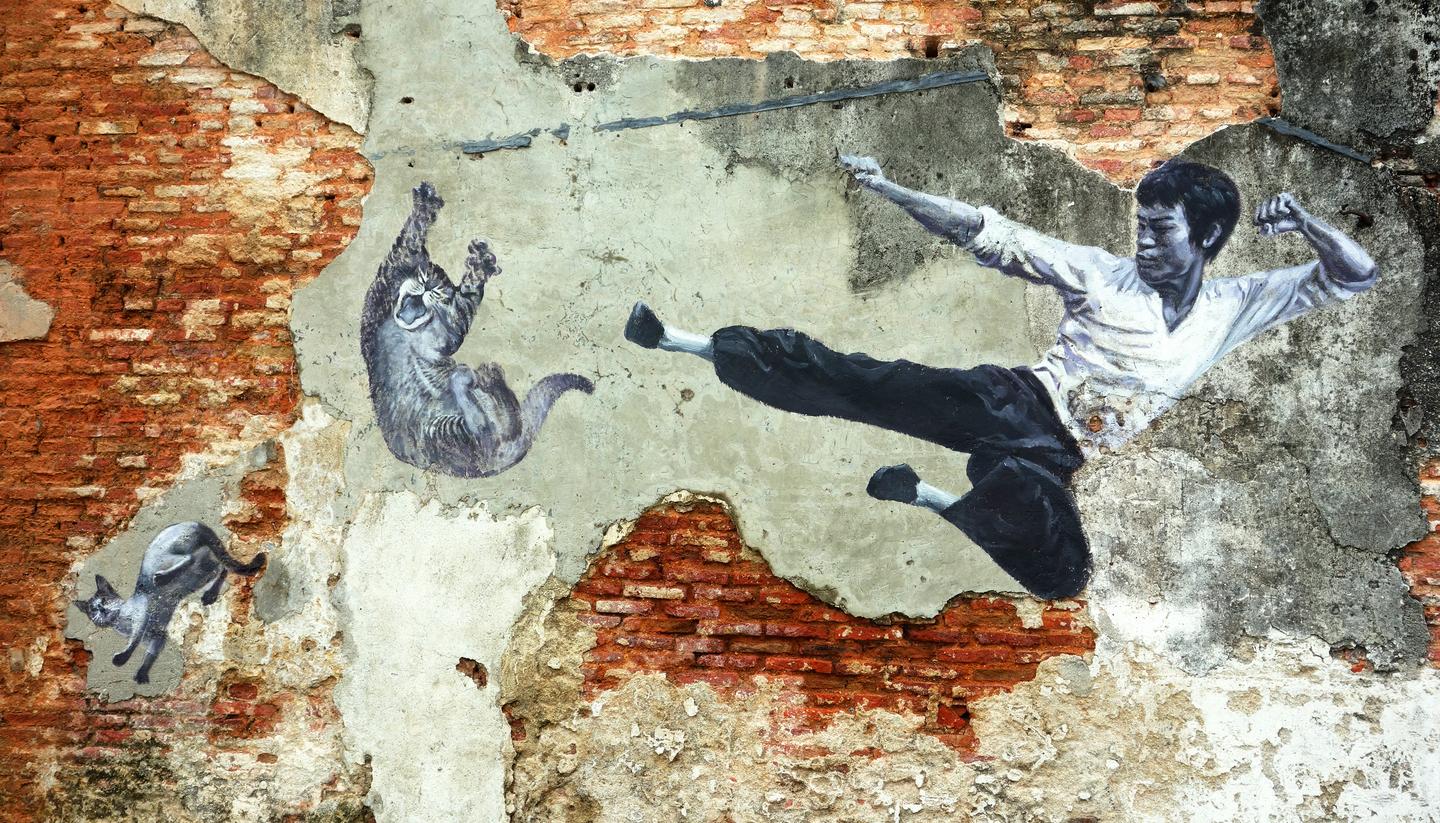 It wasn’t long ago that authorities were left less than impressed by the efforts of early street art – viewing ‘graffiti’ as the work of teenage frustration and vandalism. Today, however, the country is teeming with talented artists who have a passion for creating striking images that coat the mundane walls and streets of their towns and cities. To help you find some of the best works, we have compiled a shortlist of Malaysia’s must-see street art locations.

It is impossible to talk about street art in Malaysia without talking about the state of Penang and very swiftly afterwards, the works of Ernest Zacharevic, a Lithuanian artist now based in Penang.

The story started in 2012 when Zacharevic was tasked to produce a series of six wall murals for the George Town Festival – a celebration of Penang’s capital city, as well as the lifestyles and cultures of its inhabitants. The murals proved to be a hit, with the BBC labelling Zacharevic as Malaysia’s answer to Banksy. The most popular of the murals, probably thanks to its cross between two- and three-dimensionality, are ‘Children on Bicycle’ and ‘Old Motorcycle’. 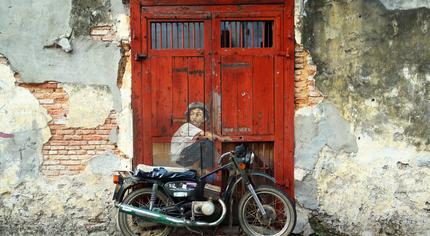 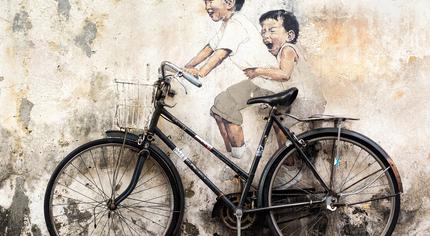 These somewhat ‘trompe-l’oeil’ constructions consist of the subjects riding their respective bicycle and motorcycle but with the vehicles installed onto the wall (rather than painted), creatively connecting the two-dimension limitations of the mural with the living, three-dimensional city that serves as its inspiration. After Zacharevic, a whole host of other impressive works started to pop up, including comic book panels made up of steel rods scattered around George Town – blending together history, humour and culture. 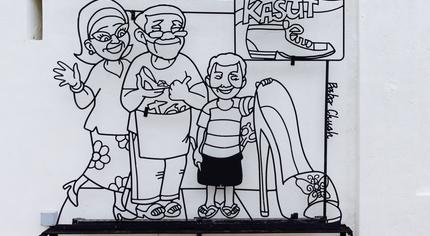 A steel rod sculpture dedicated to the Georgetown-born Jimmy Choo.

While George Town has a high concentration of street art – this map by Penang Tourism Board shows you where to find them – other towns in Penang also have their own installations. For instance, in Balik Pulau, 16km or 10 miles south of George Town, there are several eye-catching murals created by local artists, including a large painting dedicated to a bread seller who has served the area for 30 years. 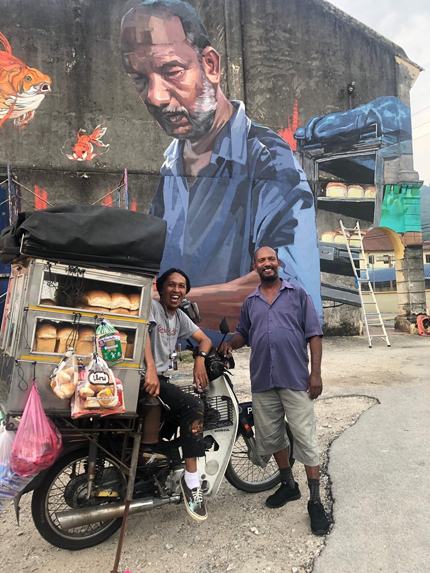 One of the popular places to see street art is in the heart of Chinatown. Along Jalan Panggung, you will find popular murals including the ‘Goldsmith’ (behind the Travel Hub Guesthouse) and ‘Birds’ (opposite Bar Zhen). But our favourite murals are hidden along Kwai Chai Hong, the small lane that connects Jalan Panggung and Jalan Petaling. In here, you will find a small collection of restored shophouses and six murals depicting the life of early Chinese settlers in the area. 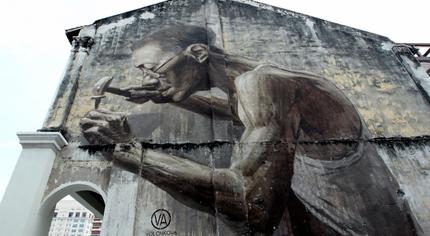 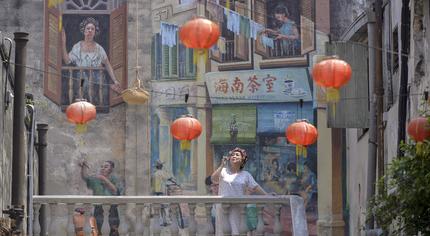 We recommend you visit the area in the evening because just around the corner is Jalan Petaling, a street crammed with a myriad of goods and food sellers and the trading activities are at their peak in the evening. You can get anything from sportswear to a steaming bowl of curry noodles here.

About halfway between Penang and Kuala Lumpur is Ipoh, a former tin mining town in the state of Perak. Ipoh is bisected by the Kinta River with the Old Town on the west side and the New Town on the east side.

The Old Town was where artists like Zacharevic first came to start the street art revolution, but it is the New Town’s Mural Art’s Lane, between Jalan Masjid and Jalan Sultan Iskandar, that gets everyone talking nowadays.

The stunning street art in the aptly-named Mural Art’s Lane is the brainchild of Eric Lai, a local school teacher who works with artists to create a series of images which celebrate the best of Malaysia’s multicultural heritage – expect anything from Thaipusam (a Tamil festival) to Chinese Opera. Our favourite piece, however, is the one depicting Joget, a traditional Malay dance. 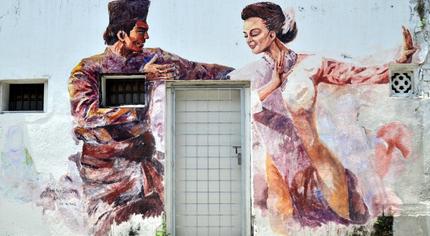 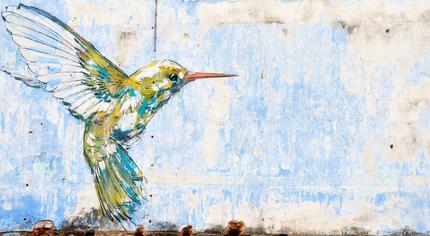 ‘Hummingbird’ by Ernest Zacharevic in Ipoh 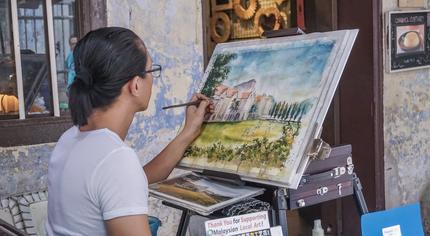 A young artist draws and sells his work in Ipoh

About 150km (93 miles) south of Kuala Lumpur is Melaka City, which sits on the mouth of the Malaka River, where the river flows into the Straits of Malaka. The names Malaka and Malacca are interchangeable.

The best street art in Malaka is along the river, so start your trip from the Windmill Dutch Square Melaka and walk upstream and very soon, you will come across buildings splashed with beautiful artwork. 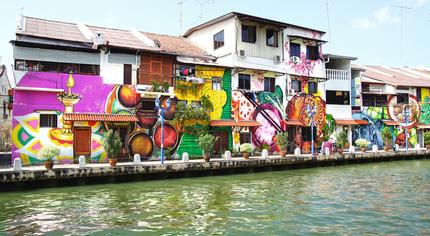 Street art on buildings along the Melaka River.

Malaysian street art is on the rise

In Johor Bahru, the capital of Johor at the southern tip of the Malay Peninsula, artists Akeem and Farid never planned a career as mural artists, but they have kept themselves busy with a string of requests coming from businesses who want to spice up their premises with a beautiful mural or two.

During interviews with the Star Online, Akeem and Farid said they have painted the interior and exterior walls of cafes, barbershops, hotels and community centres, as their reputation grows organically. It is apparent that street art, once the art form of choice among the rebellious, is now appreciated by the masses. So on your next trip to Malaysia, spend a day exploring the city you are in and maybe you will stumble upon the next Banksy.

Before you go, see the Malaysia travel guide.