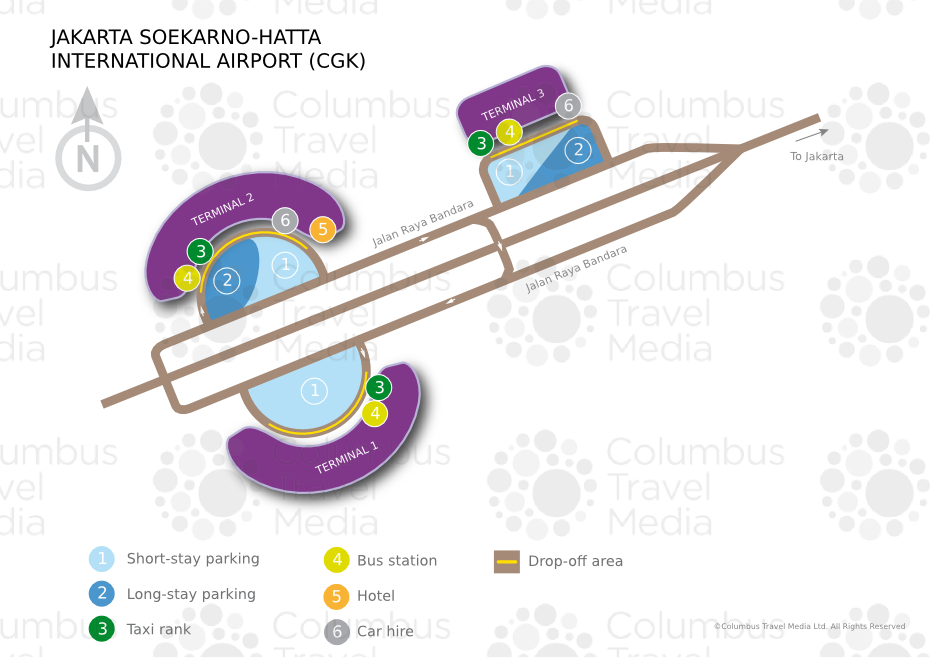 Located on the island of Java, Jakarta Soekarno-Hatta International Airport is the busiest airport in Indonesia and one of Southeast Asia’s main air transport hubs. Our guide to the airport includes information about terminal facilities, public transport routes and nearby hotel recommendations.

The airport train, known as Railink, will be extended to Manggarai station in South Jakarta in 2019.

There are manned information desks in all terminals.

Jakarta Soekarno-Hatta International Airport is located at Cengkareng, near Tangerang. The airport is a 30-minute drive (longer during rush hour) from Jakarta city centre, off the Soediyatmo toll road (Bandara exit).

No. of terminals:
3
Telephone:

Taxi: Taxis can be booked at counters in the arrivals areas of the terminals (journey time to city centre: 30-45 minutes minimum, more if there's heavy traffic). Expect to pay upwards of IDR200,000. It is advisable to agree the fare before getting in the cab.

The airport train, called Railink, connects the airport with Jakarta. At present, the train only stops at BNI City Airport Train Station in the heart of Jakarta, Duri and Batu Ceper (both closer to the airport) and at the airport. Download the Railink app to purhcase your ticket.

Terminals 1 and 2 have banks, ATMs and bureau de change facilities.

There are various food outlets in the terminals, offering both local and international fare.

A selection of shops can be found in Terminals 1 and 3. In Terminal 2, there is duty-free shopping, a gift retailer, newsagents and a bookshop.

Left-luggage services are available in Terminal 2 (hall D), while lost property offices are situated in the arrivals areas. A porter service is available to assist with luggage.

Other facilities available at Jakarta Soekarno-Hatta International Airport include first aid facilities, from the administrative offices in all terminals, baby changing rooms, in Terminal 2, and a number of prayer rooms.

Executive areas are situated in the transit lounge, in the departures area of Terminal 2 and within a number of airline lounges. A VIP lounge is located in the departures area of Terminal 1. Several meeting rooms are available for hire at the nearby Sheraton Bandara (tel: +62 21 559 7777;www.starwoodhotels.com), and in the on-site Jakarta Airport Hotel in Terminal 2 (tel: +62 21 559 0008; www.jakartaairporthotel.com).

Free Wi-Fi internet access is available throughout the airport. Post offices, telecommunications services (including fax and telex) and telephones are provided in Terminals 1 and 2. Free local dialling is offered in the waiting lounges.

There are lifts throughout the key terminal areas. Wheelchair transportation can be provided between the plane and the terminals: passengers requiring wheelchairs and special assistance should inform their airline prior to travel.

There are car parks outside all three terminals, with long-stay parking available at Terminals 2 and 3.