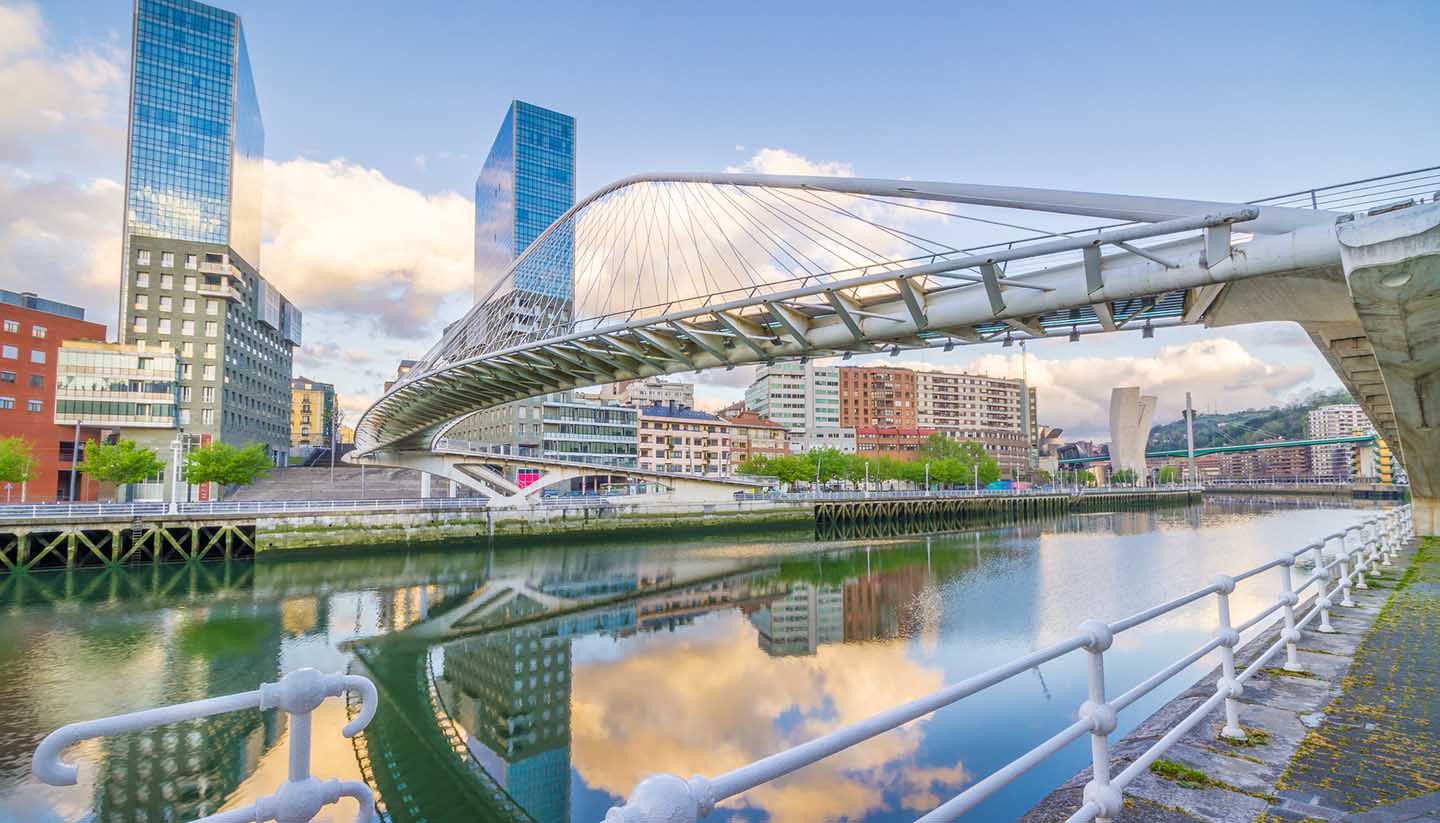 the IDs1375Bilbao Airport
Places in Bilbao

In less than 20 years, Bilbao has transformed itself from a nondescript industrial town into one of Spain's coolest destinations. Often described as “gritty” and “authentic”, this northern port is more than just a big-nosed character actor to Madrid or Barcelona's glamorous film star.

Until the late 1990s, Bilbao relied on its commercial prowess over its looks. It was where fish came in and iron went out. Gourmands and art lovers would arrive by ferry, before swiftly disappearing to glamorous San Sebastian.

That all changed in 1997 when The Guggenheim arrived. The famous art museum, built along the once rundown riverside, didn’t just transform Bilbao, but the world.

Now, any attempt to revitalise a city with high-end architecture or art is referred to as The Guggenheim effect - homage to the extraordinary revolution Frank Gehry's building wrought on the city. Half Sydney Opera House, half spaceship, Bilbao is worth visiting for the museum alone.

Its success inspired even more spending in the city: the metro stations were designed by Norman Foster, while Zubizuri Bridge was created by superstar architect, Santiago Calatrava. Still Bilbao isn’t slowing down, and work has already begun on ambitious plans to redevelop the grimy Zorrotzaurre district.

For visitors, the city's heart still remains in the medieval streets of the Old Town. Known locally as Las Siete Calles (The Seven Streets), the narrow cobbled walkways hold the 14th-century Santiago Cathedral at their centre and are bordered by the covered market.

It’s here that visitors snack on delicious pintxos (tapas on sticks) that locals say are every bit as good as the ones in San Sebastian, no matter how many Michelin stars their neighbour gets.

With stunning beaches just down the road, decent surf on the Basque coastline and a burgeoning working class arts scene in the barrios (neighbourhoods) of San Francisco and La Vieja, Bilbao may not trump Barcelona, but it no longer has to look up to anyone.

Iturrienea Ostatua is a pension in Bilbao's Old Town that's chock-a-block with colour and character. It has restored antique furniture throughout and great attention to detail has been paid to the decoration of the 21 bedrooms. The lovely exposed stone walls and oak beams give this place its charm and all in all, it represents very good value. In decent weather, breakfast can be served in the garden.

Devised by famous fashion couturier, Antonio Miró, this modern boutique hotel combines functional design and personalised service to great effect. It's a tasteful establishment with great views of Bilbao, and it offers guests access to its spas and gym on a complimentary basis. There are 50 minimalistic rooms to pick from and many come with views of the Guggenheim. All, though, have large TVs, colossal beds and chic marble bathrooms.

This budget offering is clean and comfortable and offers a good buffet breakfast. Situated in a fairly central location, in downtown Bilbao, there are a slew of funky rooms to choose from, all of which have been decorated to represent a different building in the city. Most points of interest are within walking distance and the hotel itself runs a photography tour of Bilbao. Other extras include bicycle rental, ironing and laundry services, TVs in rooms, free Wi-Fi and a 24-hour bar. It also has a secure garage for those travelling with vehicles.

This pleasant, comfortable and reasonably priced 2-star hotel is located in the heart of the historical centre of Bilbao, next to the cathedral and the Arriaga Theatre. It offers good service, spectacularly clean rooms and a very relaxed ambience, so the dated quilts and covers can be easily overlooked. What's more, most rooms come with a bath and shower and have decent sized TVs. Free Wi-Fi is available throughout.

A favourite with celebrities, up to and including the Dalai Lama, this is one of the best top-class hotels in Bilbao. You’ll find free Wi-Fi, a complimentary gym-spa, a champagne bar and an opulent selection of rooms and suites. The location, too, is handy for the city centre and the Guggenheim Museum. The staff are incredibly helpful, the breakfast is excellent and the soft drinks and chocolates in the mini-bar are included in the price.

A favourite of Ernest Hemingway, Ava Gardner and many a bullfighter, Hotel Carlton is a Bilbao institution. It is set in a grand neoclassical building with a restaurant and a 1930s-style bar. Drenched in history (it was the Euskadi government's headquarters during the Civil War), it's a splendid and very elegant hotel. Discount prices are available online if you book well in advance.