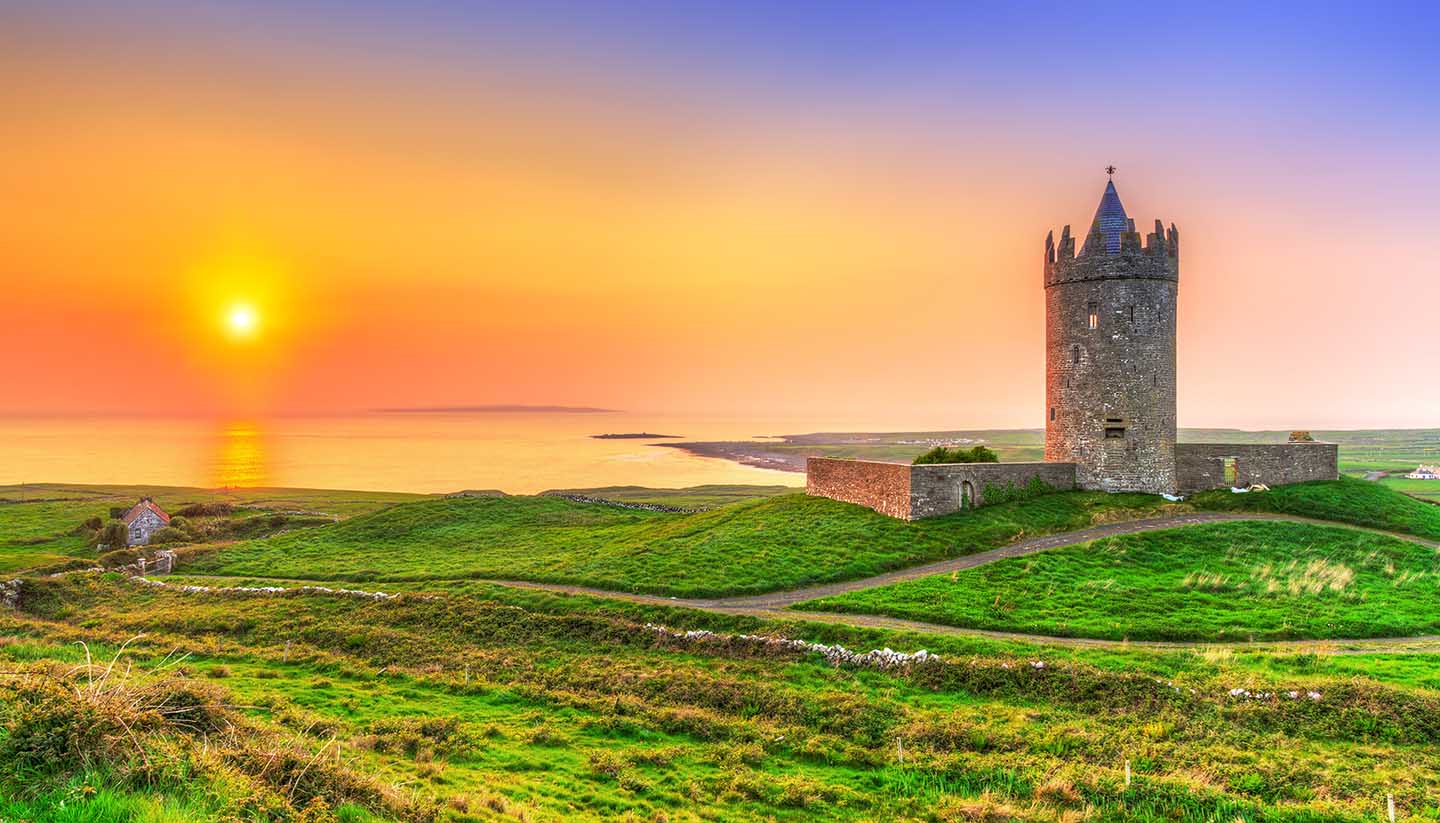 Things to see and do in Ireland

Circle the Ring of Kerry

Explore the iconic Ring of Kerry, a stunning, 180km (112-mile) scenic drive around the Iveragh Peninsula. Visitors can travel in either direction (although tour buses should travel anti-clockwise) on the circular route which passes through Kenamare, Sneem, Waterville, Cahersiveen, Kells, Glenbeigh and Killorglin, with specific sights of interest in each location.

Dilly-dally on the Dingle

Located on the western tip of County Kerry, the dramatic Dingle Peninsula is a popular diversion off the Ring of Kerry tourist trail. It is made up of the Macgillicuddy's Reeks mountain range, a series of granite peaks that rise out of the Atlantic. Walking, cycling and dolphin-spotting are among its most popular draws.

Looking for a road trip worth the name? Start the ignition in County Donegal, point the car south and keep going. The Wild Atlantic Way hugs the coastline for some 2,500 km (1,550 miles), snaking past nine counties and taking in all manner of wild bays and time-burnished villages en route.

The medieval, alley-threaded city of Kilkenny is renowned for its theatres, galleries and history-steeped buildings, most notably its bulky castle and its atmospheric Gothic cathedral. The city's pubs and nightlife are best enjoyed during one of its yearly festivals, which include the superb Cat Laughs comedy festival and the Kilkenny Arts Festival.

Gaze up at the Rock of Cashel

Sitting high on a limestone base, County Tipperary's Rock of Cashel (also known as the Cashel of the Kings) is one of Ireland's most spectacular castle complexes. Its origins date back to the 4th century, and King Aengus was baptised here by St Patrick, Ireland's patron saint, in the 5th century.

Head out to the islands

Ireland's islands range from the genteel, garden-patterned Garinish in County Cork to the wild and wonderful Tory off the shores of County Donegal. The Aran Islands – reachable from Galway – are the most popular, known for their geological formation and historic monuments. Many islands are also rich in old-time culture, with a lot of locals speaking Irish as their first language.

Set in the Cork countryside, Blarney Castle is home to the famous Blarney Stone. Situated high in the battlements of the castle, the stone is thought to be half of the Stone of Scone. Those that kiss it are said to inherit the gift of eloquent speech – although you'll need to contort yourself upside-down to plant it with a smacker.

Look out from the Cliffs of Moher

The majestic Cliffs of Moher are one of Ireland's most awe-inspiring natural attractions, towering 213m (700ft) above the Atlantic Ocean. They've featured in everything from Harry Potter films to Westlife videos. The cliffs host a rich array of birdlife, including puffins, shags, kittiwakes and razorbills.

Lose yourself in Killarney National Park

Killarney National Park covers over 10,000 hectares (25,000 acres) of oak woodland, lakes, mountains, parks and gardens in the far southwest of Ireland. It was Ireland's first national park when it was founded in 1932, and its population of red deer, cormorants, salmon and trout helped it to be designated a UNESCO Biosphere Reserve in 1982.

Located in County Mayo, the National Shrine of Our Lady of Knock marks the site where, on 21 August 1879, it's said the Virgin Mary, Joseph and St. John the Evangelist all appeared to two dumbstruck young women at the church's south gable. It still attracts hordes of pilgrims.

Raise a glass at the Guinness Storehouse

Dublin's Guinness Storehouse is a brewery-turned-museum dedicated to Ireland's most famous export. Arthur Guinness first began brewing the 'black gold' on the site in 1759, with the present-day building used for fermenting and storing Guinness until the 1980s. Tours explain the brewing process and conclude with a free pint in the Gravity Bar, which offers lofty views across the city.

Slow down at Glendalough

Glendalough is a beautiful glacially sculpted valley in County Wicklow. During Ireland's 'Golden Age' (AD 500-900), a reclusive monk, St Kevin, established a monastic settlement here; the ruins and the forest views make for a memorable sight on a sunny day. The area's name translates, accurately enough, as 'Valley of the Two Lakes'.

Grand Georgian parades, craic-filled pubs and a laidback vibe make the southern city of Cork a viable rival to Dublin for the title of Ireland's most immersive metropolis. Some locals smilingly refer to it as 'The People's Republic of Cork' and the place unquestionably has a spirit of its own, not to mention a bucket load of cultural attractions.

Step into the past at Bunratty Castle

County Clare's Bunratty Castle is the most complete medieval fortress in Ireland, featuring 15th- and 16th-century furnishings, tapestries, and artwork. A Folk Park lies in the grounds, recreating buildings including a school and post office. Regular 'medieval banquets' are held to give guests a taste of what it was like to be entertained in the castle's heyday.

Get to grips with the hard edge of Irish history with a visit to Dublin's Kilmainham Gaol, where rebels against British rule were incarcerated from the late 1700s until the 1920s. Chillingly, it's also where the leaders of the 1916 Easter Rising were executed – the tour takes in the bleak yard where they were put to death.

Explore Ireland on foot by walking one of the country's 31 designated long-distance paths. One of the best known is the Wicklow Way, which runs from the Dublin suburbs to County Carlow in the southeast. Other notable options include the Connemara Way – full of sweeping, silent hill scenery – and the historic Kerry Way, which makes use of old driving paths.

Take a stroll around Dublin's most popular city square, where landscaped parklands hold everything from the WB Yeats Memorial Garden to a bust of James Joyce. Some of the city's finest hotels overlook the square, and it remains an integral part of Dublin's fabric.

The thrill of a game of Gaelic football – a mix between rugby, football and American football (without pads) – is an unmissable experience. So too is the ancient game of hurling, where players use a hurley (wooden stick) to hit a sliotar (small ball) into the opponents' goalposts. Both sports are vociferously followed at the top level.

Tourism Ireland in the USA

Tourism Ireland in the UK