The 20 craziest festivals in the world 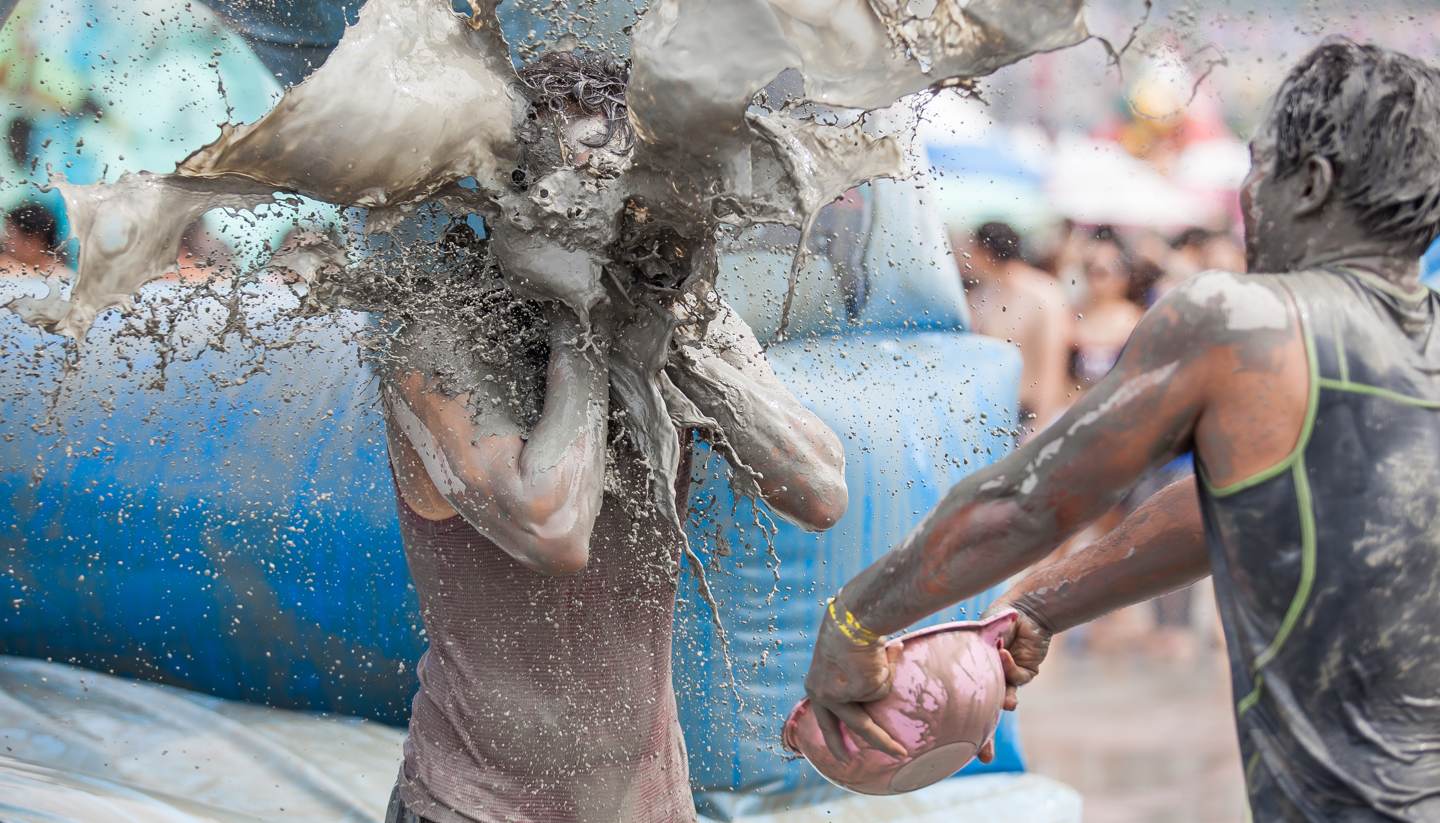 Fancy yourself as a champion tuna thrower or perhaps you’d be better at wife carrying? Whatever your bag, we’ve got it covered in our weird festivals roundup

It’s alchemy, essentially. That ability to turn mundane tasks – a fruit harvest, sheep shearing or even fishing – into an event of legendary proportions is something humans have excelled at for centuries.

And this list of weird and wonderful festivals is a celebration of that eccentric human spirit, a tribute to the art of turning the boring into something brilliant.

As if being overfished wasn’t enough, tuna are suffering the ignominy of being lugged across the beach at an annual throwing contest in Australia. The dead fish unwittingly star in Tunarama, an event which also features a prawn peeling competition and trout tossing. Who said the Aussies lacked culture?

Getting creative since the ban on tar barrelling (when locals would haul burning barrels of the black stuff through the Shetland streets), the town of Lerwick turned to torch parades instead. Nothing out of the ordinary there, until you realise they’re dressing as Vikings, burning down huge Nordic longships and partying long into the night.

Where? Shetland, Scotland
When? Last Tuesday in January

3. Battle of the Oranges, Italy

The Spanish are well known for their annual food fight, La Tomatina, but that’s nothing compared to Italy’s Battle of the Oranges. The origins of this festival are unclear, but we do know that being hit in the face by citrus fruit is painful. However, that doesn’t deter participants, who turn up in their thousands to join the fight.

Where? Ivrea, Italy
When? February 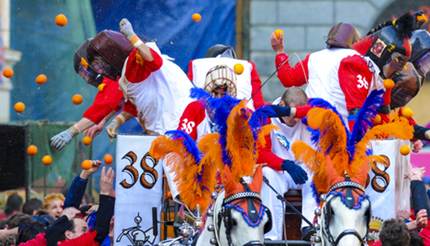 People throwing oranges at the Battle of Oranges

Not much can prepare you for seeing 9,000 near naked men fight over a 20cm-long stick, but that’s the aim at Saidai-ji Eyo Hadaka Matsuri. A priest tosses two sacred shingi sticks into the heaving mass at midnight and whoever catches, snatches and, ultimately, stuffs the sticks into a box of heaped rice will be blessed with a year of happiness, plus some aching limbs in the morning.

Where? Saidaiji-naka, Japan
When? Third Saturday of February

The ultimate test of derring-do for Nigerian fishermen, the Argungu Fishing Festival is part of a four-day cultural event held annually in the northwest state of Kebbi. At the sound of a gun, thousands of fishermen jump into the Matan Fada River and have just one hour to catch the biggest fish. The winner receives a new minibus and a large cash prize.

Where? Argungu, Nigeria
When? Late February to March 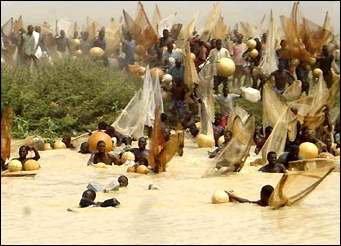 It might be hard to believe, but one year the crowds at this sheep shearing festival grew so large that the army were drafted in to control them. These days it’s all about speed and the quality of the cut as clipper-ready contestants vie for the championship title. Competitors need to be a cut above the rest to win the wool handling and wool pressing competitions too.

Where? Masterton, New Zealand
When? March

With decorations, sweet treats, carved vegetables and a parade all honouring the male sexual organ, it’s not difficult to see where the Festival of the Steel Phallus gets its name. But this is much more than just a festival of penises. Culminating at the Kanayama Shrine, where locals go to pray for fertility, safe childbirth, a happy marriage and protection from venereal diseases, the celebrations are an impressive spectacle that attract tourists and locals alike, with all proceeds being donated to HIV/AIDS research.

Where? Kawasaki, Japan
When? First Sunday in April 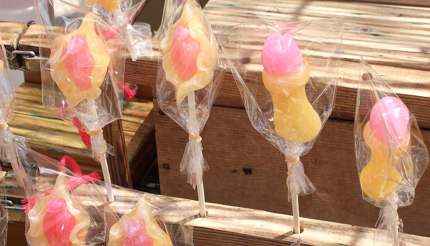 Forget packed pubs and overpriced eateries, in Thailand they really splash out during the New Year. Expect three days of oversized water guns and buckets of the blue stuff as Songkran hoses down the hottest month of the year with country-wide water fights. Traditionally, the water symbolises cleansing, but these days it seems more an excuse to get elephants to spray unsuspecting onlookers.

Where? Throughout Thailand
When? Every 13-15 April 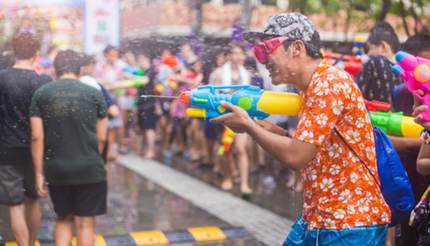 Man shooting water at someone at Songkran

Take one incredibly steep hill, a wheel of Double Gloucester cheese and a bunch of folk foolish enough to chase it, and what do you get? A bash so bonkers the authorities have tried to ban it. The idea of the festival is to catch the rolling cheese before it reaches the bottom. Whoever succeeds gets to take the cheese home – but possibly in the back of an ambulance.

Where? Cooper’s Hill, Gloucester, England
When? Last Monday in May

If you thought Italian footballers played dirty, this may confirm your suspicions. Dating back to the 16th century, Calcio Fiorentino is an annual ‘football’ tournament that permits punching, head-butting and wrestling. Players don period costume for the games, which take place in a sandy ring in Florence. The victorious team wins a cow.

Where? Florence, Italy
When? June 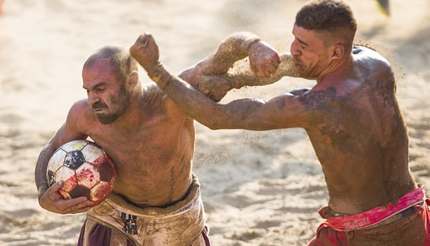 Leave your best clothes at home if you want to join the two million or so mud-loving revellers that make their way to Boryeong in South Korea for a summer-long sludge fest. There’s mud wrestling, mud races, mud sliding, mud fireworks and just about anything else mud-related that organisers can conjure up. Luckily, there is a soap making class too.

Where? Boryeong, South Korea
When? July 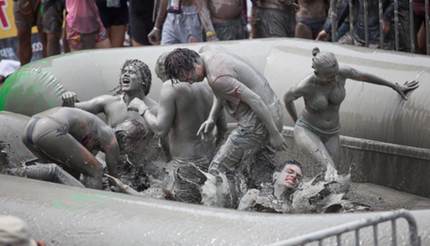 People playing in mud at the Boryeong Mud Festival

You’d have thought a petite partner would be favourable in the Wife Carrying Championships, but don’t be fooled. While a lightweight missus will help hubbies navigate the assault course in the quickest time, their lithe partners will count against them when organisers award the prize…the wife’s weight in beer.

Where? Sonkajärvi, Finland
When? July

Less a festival, more a way of life, Nevada’s Burning Man is the celebrated soiree that turns the Black Rock Desert into an alternative, free-thinking city for a week. Attracting imaginative extroverts and creative self-expressionists, attendees aren’t merely observers but participants who dream up, build and dismantle a world of mutated cars, interactive communal camps and otherworldly art in a temporary, utopian space.

Where? Nevada, United States
When? Last Sunday in August until the first Monday in September

If tomato throwing seems a little tame, then how about joining in the fun at Las Bolas de Fuego, where wire-tied rags are soaked in kerosene, lit and hurled at participants? The fire bombs are said to represent the lava balls spat out by the El Playon volcanic eruption in 1658, which led to the town relocating to its current location.

Where? Nejapa, El Salvador
When? 31 August 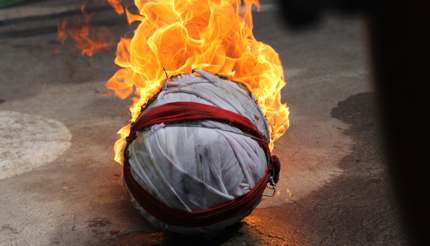 When organisers of this event realised how dull a vegetarian festival can be, they took to self-mortification to liven things up. Okay, so that’s not entirely true, but somehow this annual veggie fest has come to feature some truly shocking displays of body piercing. It’s hardly a ringing endorsement for going veggie, but fun nonetheless.

Where? Phuket, Thailand
When? October 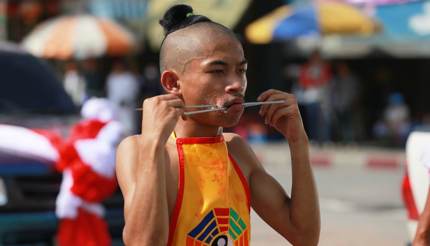 Behind the beautifully decorated mask of this incredibly vibrant celebration is a tale of crisis. When sugar sales in Bacolod dissolved in the 1980s, the local government decided to put on a ‘festival of smiles’ to rejuvenate the area. The outcome was this month long extravaganza of carnival spirit, brightly painted masks, street dancing, horticultural shows, food tastings and the all important MassKara Queen beauty pageant.

Where? Bacolod, Philippines
When? October 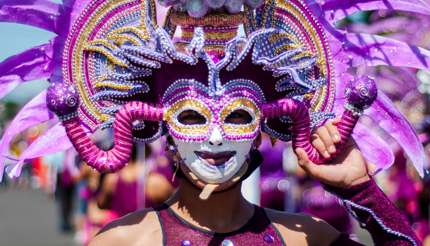 Every year competitors descend on a dusty Delaware field to see how far they can launch a pumpkin. It might sound simple, but the devices used to catapult said squash are impressive feats of engineering. As well as fuelling industrial innovation, the festival features a beauty pageant. Admirably, all profits go towards local education initiatives.

Where? Bridgeville, Delaware
When? November

Every November the good folk of Ottery St. Mary carry flaming tar barrels through their town, as part of a tradition dating back to the 1600s. Of course, there are dangers associated with such an event, but the festival’s website is unequivocal in its advice: “if you are not willing to confront the occasional flaming tar barrel… stay at home.”

As it turns out, the 3,000 crab-eating macaques found at Lopburi in Thailand gorge on much more than just crustaceans, especially as locals leave out 4,000 kilos of fruit, cakes, sweets and fizzy drinks for the Monkey Buffet Festival. Watch them stuff their faces, steal cameras, ruffle hair and clamber over anything that moves during the event, or join in with sideshows of music, dance and, rather predictably, monkey fancy dress.

Where? Lopburi, Thailand
When? 25 November 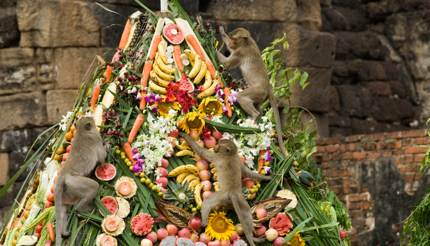 20. Night of the Radishes, Mexico

You can love it or hate it, but you can’t ignore the humble radish. At least not in Oaxaca, Mexico, where the root vegetable has been the subject of an annual festival since 1897. The celebrations last just a few hours, during which time craftsmen compete to sculpt shapes from the season’s finest radishes. First prize is a mug shot in the local rag.

Where? Oaxaca, Mexico
When? December